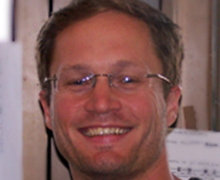 
Kent Johnson, UCI professor of logic and philosophy of science, has passed away. He was 47.

Johnson was hired at UCI in 2001 after earning his Ph.D. in philosophy from Rutgers University. He was a leader in the philosophy of linguistics, as well as in the philosophy of psychology and cognitive science. He was widely noted for his expertise in statistical methodology, modeling, and probabilistic inference. His research appeared in noted publications including Nous, Mind and Language, Philosophical Psychology, Language Sciences and Philosophy of Science. He regularly gave talks on statistical applications in the field of philosophy, most recently at the Society for Exact Philosophy in Ontario.

“Kent was much more than just a colleague,” said P. Kyle Stanford, LPS chair and professor.  “He was also a friend to many of us in the department and across the campus, and he will be sorely missed by all those who knew him.”

Johnson was a dedicated teacher both in his LPS courses and those he generously taught for other departments within the School of Social Sciences. His courses were known for their rigor, precision, and clarity. He served in a number of important service capacities for both the school and the department, including acting as equity advisor for the school and as director of graduate recruitment for LPS. He also contributed substantial service to the profession itself, including service on the editorial board of the journal Philosophy of Science and as a review editor for Frontiers in Theoretical and Philosophical Psychology.

He received his B.A. in philosophy and ancient languages from St. Olaf College in Minnesota (1994) and his M.A. in philosophy from the University of Florida (1996). He earned a certificate in cognitive science from Rutgers University while completing his Ph.D. in philosophy there in 2001. He had extensive knowledge of ancient Greek and Latin.

Johnson was a valued colleague, friend, and mentor to many faculty and students alike across the campus. He is survived by his mother, Kathleen Sernak; his father, Tom Johnson; and his sister, Kim Johnson.

The school and department will hold a memorial service in Kent’s memory on October 19th at 5PM in SBSG 1517.

In addition, the LPS Kent Johnson Memorial Fund has been set up in his honor. Donations may be made online or by by check: