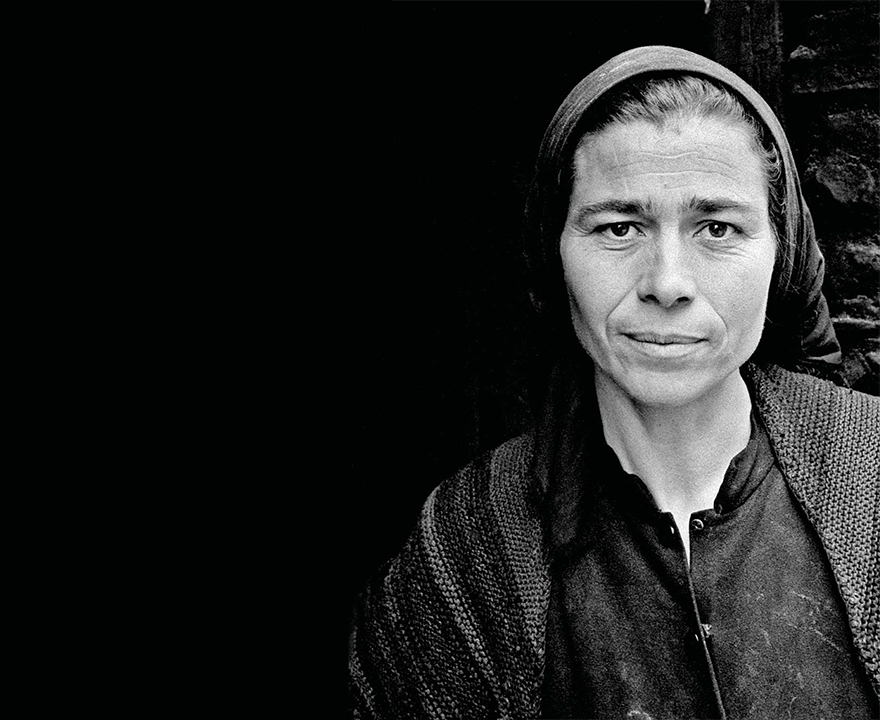 Meanwhile in Cortona, Italy…. Gerardo Ruggiero and his wife Luigina were planning a trip south to Lacedonia, where Gerardo grew up. A  snowstorm sent Luigina online to determine if the roads to the area were passable. As she clicked through links, she came across a small black and white photo that drew her attention. She called her husband over to see.

“So many times around the hearth, my mother told me that once upon a time, when she was a baker, an American journalist took a lot of photos of her to publish in an American journal – because she was a beautiful Italian woman,” Gerardo writes. “I had never taken her seriously…I thought she just liked telling me stories seasoned with dreams and reality.” His mother died in 1999, but when Gerardo’s wife clicked on that small black and white photo that February day in 2012, it was as if his mother had come back to life.

“In that moment, what I thought was a fairy tale became a reality. It was as if my mother was saying, ‘I told you I do not lie,’” he said. Gerardo found Cancian’s contact information as he clicked through photos on the retired professor’s website and sent him a message right away. The two soon became friends and Cancian sent Gerardo the photos he’d taken of the woman who Cancian learned was named Rosa Antonia, or “Letta” to friends and family.  Many of the photos he sent were originals that he’d developed in 1957 that were yellowing and bent around the edges.

“He was keen on reliving the period he spent in Lacedonia, and he gave me a beautiful gift,” Ruggiero said.

When the Ruggieros arrived in Lacedonia that month, Gerardo shared the encounter with a small group gathered at the piazza. Among them was Antonio Pignatiello, president of the Pro Loco “G. Chicone” of Lacedonia – a non-profit civics organization, similar to Rotary.

Conversations between the group led to a photo exhibit that August of 2012 - sponsored by the Pro Loco in Lacedonia - which the retired anthropologist attended. A year later, the photos were bound into a book, Lacedonia: Un Paese Italiano, 1957 (An Italian Town, 1957). Featuring Cancian’s early pictures, the book includes prefaces from the three men – Cancian, Ruggiero, and Pignatiello – explaining their unique connection and the role the photos play in telling the town’s history.

The following is a brief excerpt from Pignatiello:

“I do not exaggerate in attributing to this work a role that goes far beyond simple diffusion, that it can be an ideal bridge not only between generations past and present, but also to future generations, so that they can discover their own roots. In an age where we are slaves of time and the illusion to dominate it, the portrait of Lacedonia that Professor Cancian’s book offers us is an antidote to stop…and reflect. The hand and the vision of a young man in a foreign land humbly in search of the unexpected, takes us back in time along the wrinkled furrows dug by the sun and fatigue. Going over this furrow now is our task, to bring out of time what otherwise would have remained buried.”

Pignatiello was so moved by the works that he was able to raise funds from several sponsors to renovate an old town building into a museum that will display them.

So this August – 60 years after his initial visit to the small hillside town in southern Italy – Cancian will be traveling to Lacedonia for the grand opening of the museum where his work will be on full display for the foreseeable future. He’s also personally publishing a second edition of the book that includes an addendum on the origins of the museum.

As a way to tell the town’s living history as well as that of past generations, the museum is also running a contest for those interested in photography. Each year, they’ll feature 20 photos submitted to the museum featuring life in Lacedonia.

For Cancian, the photos represent his most valued collection. “I’m delighted people recognize the value of the pictures and their historical significance. I’m glad they’re being used. I have a lot of pictures of places I’ve worked, but there’s no local display place for them. These photos mean so much to me because I know the people now and the photos are valuable to them.”

In Italy, there’s a phrase used to explain things that don’t always turn out as planned: Non tutte le ciambelle riescono col buco. Translated, it reads, “not all doughnuts come out with a hole.”

With a full career, a continent and six decades separating his initial footsteps in Lacedonia, the words couldn’t ring more true for Cancian. His life – and this project – didn’t take the path he expected them to 60 years ago. But even if a doughnut comes out without a hole, it still tastes just as sweet.