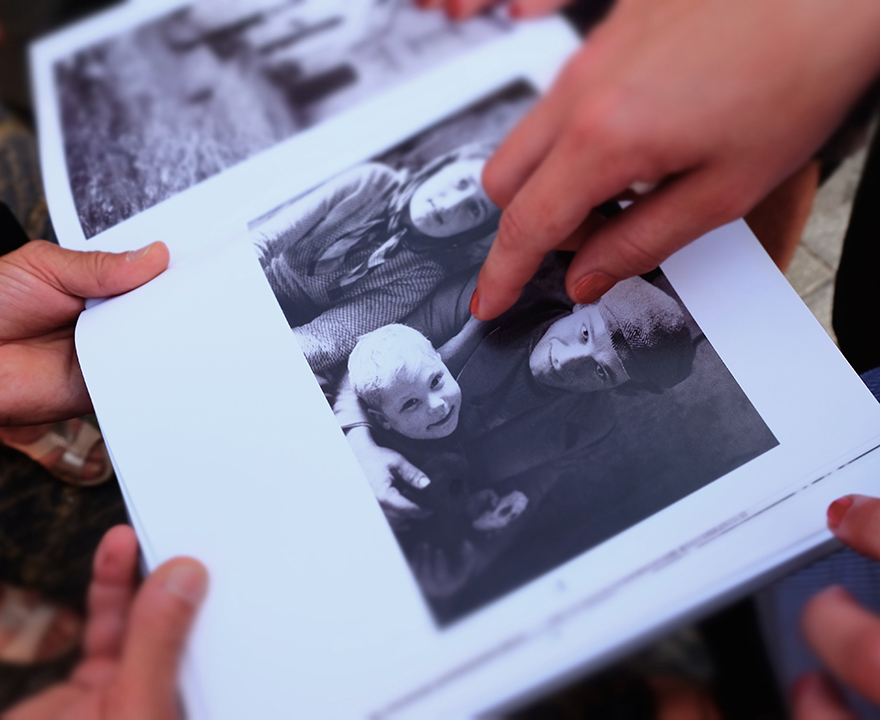 Lacedonia has experienced many changes since Frank Cancian’s first visit to the town in 1957, but it has retained the charm of its past while allowing room for the new. Modern wind turbines now dot the crest lines of the surrounding hills, and the narrow, cobbled streets of the old town transition into paved roads that wind back and forth between cafes, brightly-colored houses, and the three churches that call the commune home.

Cancian walks down one such cobbled street for the first time in five years, smiling, waving, and fielding greetings from the hundreds of locals gathered there to see him. Sixty years have passed since he first visited the small, southern Italian village as a young photographer, and tonight, the brand new Museo Antropologico Visivo Irpino (MAVI) will open in the center of town featuring the photos he took all those decades ago.

To mark the occasion, several local entities – including mayor Antonio Di Conza, the nonprofit Pro Loco organization, and the LaPilart association – have arranged multiple events spanning three days featuring the UCI professor emeritus, beginning with the grand opening of the museum, and culminating in a walk through Lacedonia with Cancian to revisit the locations of many of his photographs. In addition, documentary filmmaker, Michele Citoni, has asked to shadow Cancian during his stay in town for a film that will eventually be screened at the museum. It’s a new experience for the professor, a longtime researcher and cultural anthropologist, who is used to being the one doing the observing. But in Lacedonia, there’s a deep appreciation for his work among the residents making him something of a local celebrity. So, at least for a few days, the observer has become the subject. The opening of MAVI, a three-story anthropological museum that will display various visual works pertaining to the Irpina region of Italy, is an important enough event in itself for the people of Lacedonia. An ancient Roman town nestled among the hills of central Italy, Lacedonia was a farming village with a dwindling post-war population when Cancian came to document the daily life of its residents in the 1950s. Though their numbers have continued to decline in the intervening years due to a lack of jobs and a devastating earthquake in 1980, locals and their families remain heavily invested in the history of their home. For them, Cancian’s photos provide an emotional, and otherwise unavailable, glimpse into the lives of the older generations.

“It’s an amazing emotion to see our ancestors, many of whom have passed away, in the photos,” says one local on MAVI’s opening night. “It’s like a connection between the past and the present. Frank could capture the soul of the person and their precise emotions in his pictures. It’s like these photos are talking to us.”

As the inaugural exhibit at MAVI, 1801 Passaggi (1801 Passages, named after the number of photographs Cancian took) sits on the second floor of the museum and stretches across two rooms. The exhibit includes the professor’s original photos paired with new images from local photographers of life in the region, offering visitors the chance to compare past and present. On the ground floor of the museum hang colorful paintings depicting the topography of the Irpina region, while the top floor is dedicated to even more of Cancian’s photos, plus a featured portrait of the professor which he signed during the opening event. The museum plans to add new exhibits as time goes on, but these photos of life in 1950s Lacedonia will remain its main attraction for the foreseeable future.

“The museum opening is so important,” says Lacedonia native Rachele, who now lives in Naples but has family in town. “Because it means the mayor has understood the value of these photos for the people of Lacedonia.”

Throughout opening night, Cancian explores the museum with Citoni in tow, who captures the professor’s many interactions with the locals. A few knew him when he was a 23-year-old American anthropologist visiting the town, but most are simply thrilled to see him because of what his work means to their home. His ever-present entourage of at least ten people makes one thing apparent – Cancian, though technically an outsider, is a beloved member of this close-knit community. The following day the professor arrives at MAVI before 9 a.m. to be formally interviewed for Citoni’s documentary. Sitting on the third floor of the museum in front of his own photographs, he’s asked many questions pertaining to the Lacedonia project, including how he approached documenting the everyday lives of these people whom he’d never met. His answer – build trust. Though the director is keen to get Cancian to open up about his own feelings and opinions on the town, the professor keeps it more factual. Ever the anthropologist, he’s much more interested in discussing the history of Lacedonia, its people, and the stories behind his pictures.

After a couple hours in front of the camera, he’s whisked away to the next event, a public forum discussion held a few streets away in one of Lacedonia’s churches. And later that evening he’s the center of attention once again, as the MAVI officially introduces the 1801 Passaggi exhibit and presents him with a framed certificate to thank him for his contributions to the museum. At both events, he listens intently, and smiles for dozens of clicking cameras, taking it all in.

It’s not until the following morning that Cancian gets to step out of spotlight – just a bit – and back into his familiar role as researcher. To cap off the three days of events, he meets with locals in the town square before leading a group of press, museum and Pro Loco representatives, and curious Lacedonians on a walk through the village to find the locations of some of his original photos. Before the walk begins, several of the locals identify themselves and family members in photos in Cancian’s book. The details of their memories are impressive – one man recalls the exact date on which his photo had been taken (May 26, 1957 – St. Phillip’s Day), while another points out the specific tuba – in a sea of instruments – that belonged to his father (he still has it at home). There’s another woman in the square who was 12 years old when Cancian arrived in Lacedonia. She tells him she had no idea she was in any of the pictures until his books was released five years ago and she received an envelope in the mail. Her photo was inside, and she says the emotions surrounding that moment are indescribable. She happened to be visiting town this week and wanted to stop by to meet the photographer again. She and Cancian reminisce (she and the other Lacedonians do most of the talking, everyone eager to relay their side of the story, where they were and what they remember of the anthropologist’s time in their town) while onlookers take photos and Citoni records video. Then, it’s time for the walk. As the stroll through the city begins, the group wanders past the brightly colored, newer houses into the gray and abandoned old side of town. Cancian seems right at home leading the expedition as he points out staircases and crumbling arches that can be seen in photos on the MAVI walls. Many locations are no longer recognizable, or are gone altogether, due to the 1980 earthquake. But a few of the areas look untouched – a mark of the strength of the ancient architecture. The locals in the group share the history of the town that they remember, as the crew makes its way to the edge of town where there are 180-degree views of the surrounding hills. On the way back to the town center, an unexpected run-in with an old friend of the professor’s proves to be the highlight of the morning. She is, in fact, the woman who hosted him when he first arrived in Lacedonia six decades ago, and a portrait of her and her family hangs in the MAVI. There is lots of hugging and laughing as she tells stories about the young Cancian and their lives back then. He says a few things to her in Italian, but mostly she does the talking while he looks on with a smile. It’s a heartfelt and happy note to end the week on.

Heading back toward the center of town for his ride to the airport, Cancian is asked for some wise words for the next generation of anthropologists. He obliges before stepping into the car that will take him away from Lacedonia, and this special community, once again.

“Treat people respectfully,” he says. “And you’re not going to learn anything by talking about yourself.”

View more pictures from the MAVI grand opening in Lacedonia.