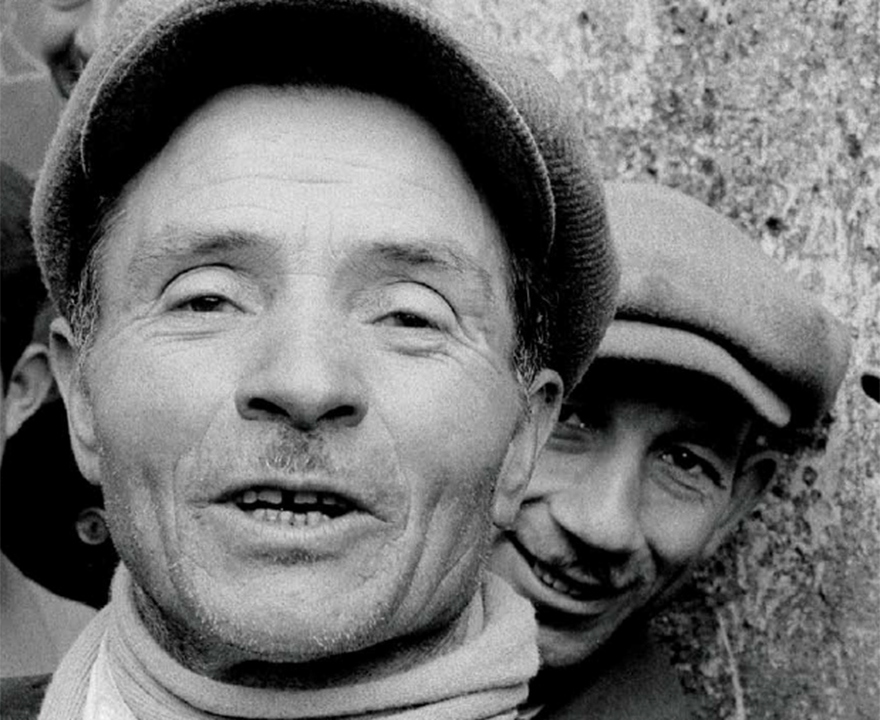 part one of a three-part series

The year was 1957. A recent Wesleyan graduate had earned a coveted Fulbright scholarship to study in Italy. It was a pivotal time for the Mediterranean country working to dig itself out of post-war poverty and devastation, marked as a period of reconstruction and recovery. The son of Italian immigrants, Frank Cancian had grown up in a home frequented by Italian-speaking guests, family and friends, and he’d always wanted to visit the country. While his major was in philosophy, his passion lay in photography; he was one of Wesleyan’s only students to submit a senior thesis using documentary photography. But there was no scholarship program in photography available to send him overseas.

“This was a time when the way people got visual reports of what was going on in the world was through Life Magazine,” he says. “And this way of telling stories through visuals is what got me interested in doing this kind of work.”

So, with his camera in tow, the young adventurer struck out for Rome and soon found an opportunity to incorporate his love for photographing other cultures in his work.

“I talked with the Fubright commission in Italy, showed them my senior thesis photos of the White Mountain Apache tribe in Arizona, and they gave me permission to use my book allowance to buy film,” he says. They also pointed him in the direction of Lacedonia, a rural farming community and hill town 100 kilometers east of Naples. Cancian was to travel there and link up with two social workers who could help him collect survey data for a famous anthropologist while Cancian also snapped pictures.

Over six months, Cancian would travel back and forth from Rome to Naples by train and then on to Lacedonia via jittny – a tenuous mode of travel, he says, on a route containing certain stretches where the driver would “go real fast” to avoid bandits along the roadside. He lived for stints among artisans, merchants, farmers, and many young men who had been educated in Lacedonia to be teachers, but could find no jobs, learning their stories and taking their photos.

“I would stay in a private home in a large room with two double beds that was empty all week until Sunday evening – the day before the Monday market when all four spaces in the beds were used,” he said.

The water most families used was brought up in barrels from sources in the valley below - a daily task he documented on still film.

“I documented as I moved quietly through the community,” he says. “I like to take pictures where people do their regular activities. I prefer ordinary things – things that are not officially important.”

One of these activities included a series of photos taken outside one of the town bakeries. A woman there was the subject of several photos Cancian took, one in particular snapped while she was standing in the doorway. The residents would prepare bread at home and then bring the dough to a communal oven, like the one where the woman worked.

In a small town of 7,000, the outsider with a scholarship and a camera became an object of attention and Cancian found himself being invited to lots of parties and gatherings. He became friends with many of the people he photographed and took notes on their names and occupations.

When his scholarship was up in early fall, Cancian returned to Wesleyan University in Connecticut. The communications director there paid him to take photos around the campus, and Cancian earned $.75 per 5x7 photo. The director of the Arts Center at Wesleyan let him sleep in a back room and use the dark room at night. When the director caught a glimpse of the pictures, he scheduled a show in February 1958. His work earned him a job that fall with the Providence Journal in Rhode Island as a reporter where he also took his own pictures for the stories he wrote. His Lacedonia photos made the cover of a Sunday edition and were featured in another show at the museum of the Rhode Island School of Design.

During this time, the U.S. economy was changing and more kids were graduating high school and interested in college. The need for university teachers was making graduate school more plausible. With a plan to merge his budding interest in anthropology and photography, he applied and was accepted into graduate school at Harvard.

The photos detailing life in the small Italian commune were relegated to his files, where they remained for several decades. Cancian, meanwhile, shifted his focus to research, and spent 30 years of his career studying the Mayan people of Chiapas, Mexico.

He enjoyed professorial posts as an anthropologist at Stanford (1964-66), Cornell (1966-69) and another stint at Stanford (1969-76) before joining the faculty at UCI. For 23 years, he taught undergraduates and graduates on the Irvine campus and conducted his anthropological research, totaling more than three years of fieldwork in Mexico.

But when he retired in 1999 and had more time to pursue other passions, photography was once again at the top of his list. He published Orange County Housecleaners, a photo ethnography featuring the pictures and stories of seven women who make their livings cleaning houses close to the southern California campus.

“I like to think of this book as a transition book - doing life histories and combining it with photos,” he says.

He started a blog called Main Street UCI to capture and archive diverse, firsthand accounts of life at UCI from those living it – students, faculty, staff, and visitors. He filled galleries with pictures he’d taken during his lifetime of teaching and travels, featuring exhibits like While Waiting, a collection of photos he snapped when he found himself or others waiting for someone to arrive or something to happen – standing outside a restaurant opening, sitting before a church service, or stuck in a waiting room for a healthcare appointment that didn’t start on time.

“The project began when the demands of my job made it hard to find blocks of time for photography. I decided to work with whatever presented itself while waiting; I documented what I saw during those minutes, sometimes those hours,” he says, highlighting his ability to find something interesting among even the most mundane experiences. He also mentored undergraduate students interested in ethnographic anthropological research – efforts which earned him an Outstanding Emeritus Award from the UCI Emeriti Association.

During this time, the Lacedonia photos – including those of the baker and others he’d filed away decades before – were brought back to life via his website.