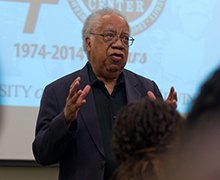 
Starting in the late 1950s, Joseph L. White boldly forged the domain of black psychology. Today, the “godfather of black psychology” looks back on his 60-year career championing the rights of blacks and his 1968 confrontation with APA’s Board of Directors. Story courtesy of American Psychological Association.

In 1968, Joseph L. White, PhD, had had enough. As a psychology professor at California State University, Long Beach, he was infuriated by the lack of support that blacks were receiving from the field in general and that black psychology students and professors were getting from APA in particular.

He and his colleagues decided to take action. They stormed into an APA Board of Directors meeting at the Annual Convention in San Francisco, demanding a hearing for their grievances. They asked the board, and by extension, APA, to see African-Americans on their own terms and through a lens of resilience. While the board members initially balked — some even accused White of racism — his ideas gained a foothold in the field, setting the stage for the multicultural practice and research of today.

Today, the University of California, Irvine professor emeritus — who served as campaign director for Robert F. Kennedy in 1968 and knew Malcolm X and Martin Luther King Jr., among other civil rights leaders — says he's pleased but a bit shocked by the reach of his arguments.

"They say the unplanned journey is the best one," says White, 83. "If you had told me in high school that all of this was going to happen, I would have denied it to high heaven."

Q: How did you initially get involved in psychology?

A: I grew up in Minneapolis, and I had been trained to work as a waiter in the big hotels there. But when I turned 16, my mother wanted to get me out of there because she was worried I might be headed toward the streets. So she shipped me off to relatives in San Francisco, one of whom was an aunt who was 10 years older than me and had just graduated from UCLA.

Two things happened: Black people in San Francisco could not join the waiter's union, so that avenue was shut down to me.

Then my aunt sat me down and said, "Look. If you can't be a waiter, why don't you think about going to college?" That appealed to me, partly because she told me that higher education in California [at the time] was free. Also, the war had just started in Korea, so I was able to get a four-year deferment just by going to college.

So at age 17, I enrolled in general education at San Francisco College [which later became San Francisco State University], 10 blocks from my house, and one of my classes was a psychology class.

Q: Which aspects of psychology grabbed you?

A: One was Pavlov and his dog. I thought, "That's the way they condition people. They say black is bad, bad, bad, bad," from the time you're a little baby — and pretty soon they don't have to say it any more.

The other big influence for me was Freud, particularly the business of defense mechanisms — that you could look straight at something and not see it because you were protected by repression, projection, suppression ... Your defense mechanisms wouldn't allow you to see reality.

I thought, "No wonder we have these big arguments in class about race and stuff — these white kids don't see the world the same way I do because they're living in a different reality."

Q: What was your route into graduate school?

A: The first time I applied to grad school, I applied only to the University of California, Berkeley, and I didn't get in. I was a little bent out of shape by that. A professor suggested I get a master's degree at San Francisco State and apply for grad school again later.

When the time came, he and a few other young professors made some calls around the country. I was married at the time and we had one baby. The people at Michigan State [University] came out and interviewed our family, and then they said, "Son, you're going to East Lansing, Michigan," which we did in 1958.

Q: What was the climate like for blacks in psychology and academia at that time?

A: It was just this big ole invisibility. There were no blacks in the graduate schools, no black professors and virtually no blacks in the books that were written on psychology. Every now and then we'd appear in the literature and it would say things like, "Negroes have a low IQ and they can't do a complex task." And during both world wars, psychologists testified before Congress and said black youngsters couldn't fly airplanes.

It was the same thing at Michigan State. I was the first black graduate student in clinical psychology there, and there was this subconscious, unstated point of view that blacks didn't have the ability. Fortunately for me, I was extremely well prepared because I'd gotten my master's degree. They were expecting me to just kind of hold my own, but instead, I excelled. They flipped 180 degrees and said I was the smartest Negro they ever saw. [In fact, White graduated at the top of his class in 1961, and in 1996, he was honored as the top student in the 50 years since the founding of Michigan State's clinical psychology doctoral program.]

Q: What happened in 1968 that made you challenge APA's Board of Directors?

A: It was the third day of APA's 1968 Annual Convention in San Francisco. By that time, there were about 10 black Ph.D. psychologists. And we were tired of this invisibility business. Tired of what we called the "deficit-deficiency" model. We were tired of bad things being said about us, that we were dumb and we couldn't do complex tasks.

So we scheduled a meeting with the APA board and asked, "Why would you all, in the 20th century, create a profession that would make us invisible and then say these bad things about us?" They got upset. They said, "Don't come in here talking to us this way." I said, "Look here, we've been repressed for 400 years. It's not gonna hurt you to hear some unpleasant things for 20 minutes." A fistfight almost developed — it was a mess.

Q: You brushed elbows with some of the major leaders in the black civil rights movement, including Martin Luther King Jr., Black Panthers' leader Eldridge Cleaver and Malcolm X. Can you share a personal story?

Bob would bring Malcolm over to the campus to visit, and we'd argue all night long, these 10 black graduate students. Malcolm was telling us that the white man is the devil — it wasn't personal with him; he was just a great debater. We would say, "Well, no, he brought us here on a scholarship," and this and that. . . . He tried to tell me — and I didn't believe it at the time — that when I got out of graduate school, that they were gonna call me, "Dr. Nigger." I said, "Oh no, they'd never do that."

Q: Who was right?

A: When I came back to California in 1961 as this brand new Ph.D., I thought I had arrived in heaven. And then I tried to rent a house and found out I wasn't in heaven — I was one of "those Negroes." I also tried to rent an office because I became a licensed psychologist, and I ran into the same set of issues. I remember what Malcolm X had told me about "Dr. Nigger" and so forth.

From that point on I started a fair housing foundation and a number of other things [including, at the behest of student protests, putting black studies courses into the curriculum at Long Beach]. Gradually I turned from what they thought was the nicest Negro in the world, at Michigan State, to this militant dude.

Q: You also served as Robert Kennedy's campaign director in Long Beach in 1968 and you were with him the day before he was assassinated. What were your impressions of him?

A: I got to know Bobby Kennedy fairly well because I'd always pick him up when he came to Long Beach. Up until John F. Kennedy was assassinated, Bobby didn't really see the need for major social change. Then he went into a deep period of grief. By the time I met him, he was emerging from that grief. And he was beginning to understand that people were being mistreated in America, that there were poor people who didn't have anything to eat down in rural Mississippi. He was developing, I think, a genuine empathy for people who were locked out of the system. I think he went through a psychological transformation.

Q: You're also famous for writing "Toward a black psychology," a landmark article that appeared in the popular black magazine Ebony in 1970. How did that come about?

It was an opportunity to start the conversation. I didn't know what black psychology was, but I had hunches. The biggest point I made was that we should develop a strength-based psychology instead of a deficit-based psychology. My reasoning was that I grew up in a one-parent home with two siblings, and my mother was able to keep us together, feed us, clothe us, get us through high school, keep us out of jail. If that doesn't require complex behavior, I don't know what does.

Plus, Ebony sells a million copies a month.

Q: What kind of impact did the article have?

Now when you go to therapy, therapists don't want to hear about your problems the whole time — they want to find out what your strengths are. Now we have a multicultural psychology.

Q: How do you perceive the state of multicultural psychology?

A: We've come a long way, but I think we're split in two. The older generation isn't sure what all this multicultural psychology is about or whether it's valid. The younger people, 50 and under, love it because they're growing up in a multicultural world.

We used to have to fight to get a [multicultural] class into the [psychology] curriculum. Now we've got some graduate schools where the whole curriculum is built around a multicultural psychology model.

Q: What are the biggest challenges facing African Americans today?

A: Only a few blacks really profited from the civil rights movement in the larger sense — the ones Professor W.E.B. DuBois called the "talented tenth." We've got a top talent pool moving along, but we have a much bigger pool in the inner city that we haven't quite been able to tap, especially males.

Q: How can psychologists and others help to improve that?

A: We have to start working with young children and get them going before they fall behind. We need to treat the total family — give them housing, give them help in developing job skills, help them find jobs. We also need more ethnic psychologists, especially black males.

An example of the kind of program I'm talking about is taking place in Akron, Ohio. [Basketball superstar] LeBron James has promised 2,000 at-risk kids four-year scholarships to the University of Akron starting in 2025, part of a program that starts in elementary school and gives kids the tools they need to succeed in academics and in life (see www.lebronjames.com for more).

Q: Looking back on your career, what are you proudest of?

A: I've worked with more than 100 young people who have become psychologists — not just blacks, but also Chicanos, Native Americans, Asian Americans, women. Probably my greatest accomplishment is that I was able to attract all these talented young people who have gone on and made careers in the field, some of them better than me. As they developed, my ideas were still developing and together we could create and further this field.