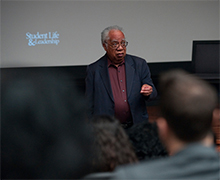 
Less than two weeks after President Lyndon B. Johnson dedicated the site of the future UC Irvine campus in an effort to “open the doors of America’s abundance” to all, he signed the Civil Rights Act of 1964 outlawing discrimination based on race, color, religion, sex or national origin. The bill was an historic milestone for the U.S. and the civil rights movement.

Nearly 50 years later, White reiterated his commitment to opening access routes to higher education in California for underrepresented, minority students speaking at the 40th anniversary celebration of UCI’s Cross-Cultural Center, which he helped found. It was the kick-off of a series of Black History Month events that continue through Feb. 28.

Revered as the “godfather of black psychology,” White was influential in establishing the Association of Black Psychologists, California’s Educational Opportunities Program, and the Cross-Cultural Center, which was the first of its kind in the University of California system. Throughout his tenure at UCI, White has served as a mentor to countless students from all walks of life, including Vice Chancellor of Student Affairs Thomas Parham ’77.

“He taught us with his heart and soul, he mentored us, he guided us because that is part of the UC Irvine experience,” Parham said of White, professor emeritus of social sciences. “There is nobody who has a bigger heart, nobody who has a stronger commitment, nobody who has claimed and mentored more people than this man.”

Every year, UCI honors the trailblazing psychologist with the Joseph White Lecture series during the Martin Luther King Jr. Symposium.

“No single person has had more influence over the Cross-Cultural Center than Dr. Joseph White,” said Kevin Huie, center director. “It’s never lost on me that the Cross has been in its existence for 40 years because of people like him.”

This year, nearly 500 students, faculty and staff attended a campuswide teach-in for the Joseph White Lecture, which focused on the #BlackLivesMatter movement, a social media campaign created to draw attention to Trayvon Martin’s death in 2012 and to issues of anti-blackness. The movement grew on the heels of officer-involved shootings of unarmed African-American males in Ferguson, Mo.; Cleveland, Ohio; and Staten Island, N.Y., last year.

The event’s aim was to open lines of communication among members of the UCI campus community about what White called vital issues of race, culture, multicultural coalitions, and solutions for social change.

Click here for a listing of Black History Month activities on campus.