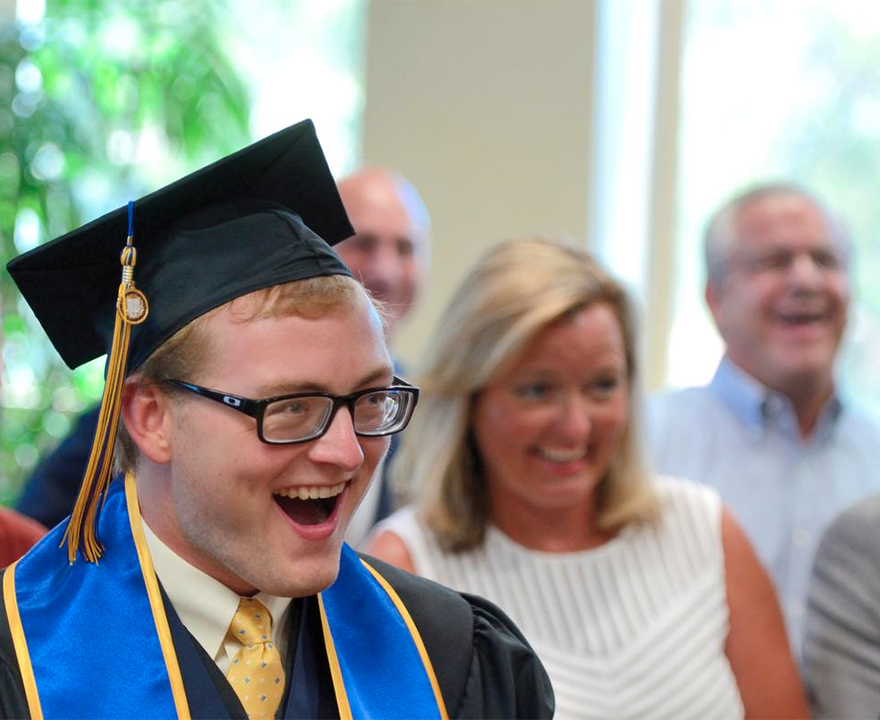 
After more than four years as a student-athlete at UC Irvine, Christopher Swieca had looked forward to the day he would attend graduation with his fellow water polo teammates.

But about a month before graduation, he discovered that the retinas in both of his eyes had been detached, caused most likely by acute nearsightedness that had nothing to do with playing sports. He immediately had back-to-back surgeries, which kept him lying face-down 24/7 for 20 days.

Just two days before the June 10 ceremony, Swieca’s doctor told him he needed another surgery. So instead of attending the graduation, he ended up watching it on video chat.

“He was bummed out,” said Jared Osborn, Swieca’s teammate and roommate for four years.

Then on Tuesday, UC Irvine presented the 23-year-old Swieca a gift to make up for what he had missed. The university hosted a surprise commencement ceremony for Swieca in Chancellor Howard Gillman’s office.

It was prompted by a handwritten letter to Gillman from Swieca’s grandmother, Sandra Schrader.

“When I sent the letter, I felt like I got an immediate response back so I knew that it had really touched someone’s heart,” Schrader said.

Having no idea what awaited him, Swieca walked into the office followed by three fellow senior teammates and their coach. The teammates had told him they would just pick up his diploma and take photos wearing a gown and cap.

But inside he was greeted by his parents, siblings and grandparents, as well as newspaper and television reporters. Swieca looked back at his teammates with a bashful smile on his face.

“I had no idea,” Swieca, who grew up in Riverside and now lives in Newport Beach, said after the ceremony. “Looking back on it now, there were a lot of weird things. ... I should have seen it, but they did a good job keeping it a secret.”

The ceremony featured the national anthem and a speech by Gillman, just like regular commencement ceremonies.

“The emotion quickly set in that they were all here for me,” said Swieca, who majored in business economics with a minor in political science. “I was realizing that everybody had taken significant amount of their time and put significant amount of resources into this afternoon just for me.”

But it was his best friend’s speech that most struck Swieca’s heart. The 6-foot-4 former athlete took off his glasses and wiped tears, his lips quivering as he listened to Osborn, his teammate since they were redshirt freshmen.

“Hearing those words and seeing him up there doing something out of his comfort zone and listening to things that we’ve talked about and really had to experience the last five greatest years of my life, it was pretty emotional,” he said.

Swieca said he wasn’t surprised about his grandmother’s part in the ceremony.

“She kept telling me that she wanted to have a small kind of redo commencement,” he said. “And I kept on telling her, ‘No that’s embarrassing.’ But it turns out I had to end up doing it in public and on television.”

After the ceremony, Swieca hugged and kissed Schrader.

“He’s a very stoic young man, so I knew it really got him,” she said. “This is certainly going to be a memory that’s going to be with all these young men, and particularly Christopher, for the rest of their lives as well as members of the family. It’s definitely been a wonderful gift.”

-photo and story courtesy of the OC Register