Honoring the 'godfather of black psychology' 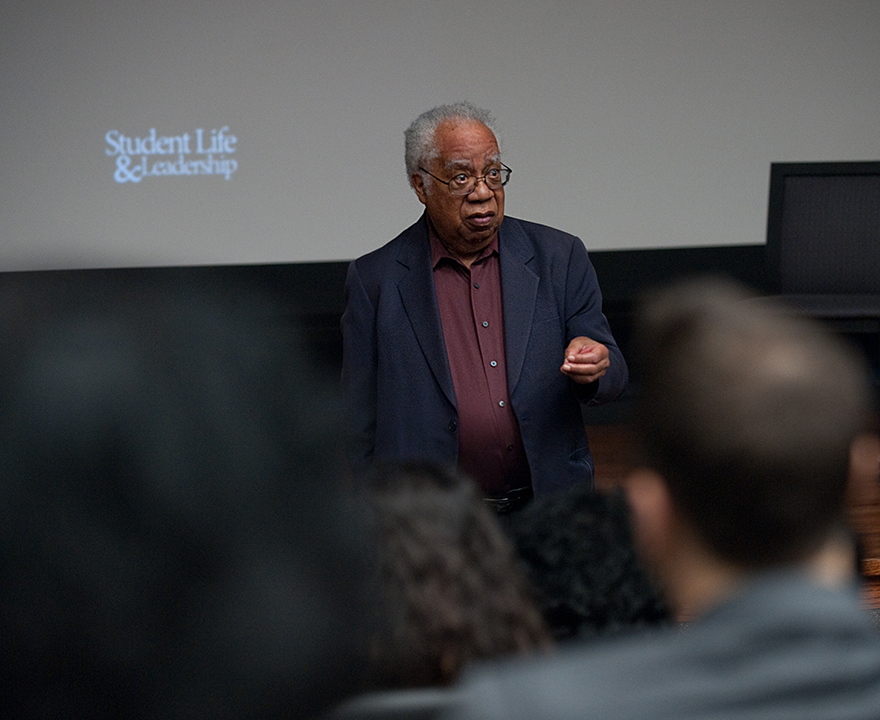 Honoring the 'godfather of black psychology'


In a Cross-Cultural Center meeting room, a portrait of UCI Professor Emeritus Joseph L. White looks contentedly over the daily meetings and activities of the many student groups who call the center home. The painting explodes with color, befitting a man who succeeded in bringing together people from all races and cultures to share equally in the American dream.

The artwork was commissioned for the 2006 dedication of the meeting room in his honor. Kenneth Bentley, a UCI alum who counts himself among the many who considered White a cherished friend and mentor, knew that a plaque wouldn’t be good enough.

“We were trying to think of a way to let future generations of students know who Dr. White is, what he’s all about,” Bentley says. “And we thought a painting would say a lot.”

The portrait serves as a tribute to the man affectionately referred to as the “godfather of black psychology” by students, mentees and colleagues. White died Nov. 21 at the age of 84, but his profound influence will continue to be felt both on campus and in the realms of higher education and psychology.

For more than 50 years, White enjoyed a distinguished career in psychology and mental health as an administrator, clinical supervisor, writer, consultant and practicing psychologist. At the time of his death, he was professor emeritus of social sciences at UCI, where he spent most of his career as a teacher, supervising psychologist, mentor and director of ethnic studies and cross-cultural programs. He helped found the Cross-Cultural Center – the first of its kind in the University of California system – and it’s fitting that his benevolent image continues to oversee its mission.

“Dr. White was a renowned scholar and will be remembered for his pioneering work in clinical psychology. But like all great professors, his most enduring contribution is that he touched so many lives as a mentor and a teacher,” says Condoleezza Rice, former U.S. secretary of state and a family friend. “These include students who quite literally would never have made it to college without his help and encouragement. For all that he did for so many, Joseph White will live on in the grateful hearts of his students and colleagues.”

A leading champion of diversity

At the height of the civil rights movement, White emerged as a powerful voice of change, challenging psychologists to better understand the unique experiences of ethnic minorities. He is widely seen as a pioneer in the contemporary field of black psychology, and in 1968, he helped found the Association of Black Psychologists.

His seminal article in Ebony magazine in 1970, “Toward a Black Psychology,” also was instrumental in beginning the modern era of African American and ethnic psychology. It earned him the sobriquet “godfather of black psychology.” Other ethnic minorities, women and the LGBT community adopted the same approaches, and his work paved the way for multicultural studies at American universities.

“Throughout his life, Dr. Joseph L. White has stood on the side of social justice and directed his psychological and academic endeavors with visions of hope and possibility for transforming dark yesterdays into brighter tomorrows,” says Thomas A. Parham, UCI’s vice chancellor for student affairs, a past ABP president and a former student of White’s who considered him a valued friend and mentor. “He taught us with his heart and soul, he mentored us, he nurtured us and he guided us, because that is part of the culture he helped create.”

A mentor and a guide

Parham adds that beyond the classes he taught, the books and manuscripts he wrote or the clients he aided in therapy, perhaps White’s greatest legacy is the scores of students, young people and early-career professionals he mentored and guided along the way.

“Joe White was an icon for all of us who aspire to be as solid a mentor as he and a beacon for everyone committed to making the university that rare place where everyone – both in spite of and because of their diverse backgrounds – will thrive,” says Bill Maurer, dean of the School of Social Sciences. “He showed us how to push our research outside our own comfort zones and bring it into the lecture hall, the seminar, the mentoring session – indeed, the warp and weft of this richly diverse campus.”

White was born in Lincoln, Nebraska, on Dec. 19, 1932. Upon completing his bachelor’s and master’s degrees at San Francisco State University, he was accepted into the clinical psychology doctoral program at Michigan State University. In 1961, he became the first African American there to earn a Ph.D. in clinical psychology and, as he later recalled, became the first black psychologist he had ever seen.

Before joining UCI, White was part of the faculty and administration at both California State University, Long Beach and San Francisco State.

During his time at Long Beach, White worked with Willie Brown, a college friend and former speaker of the California Assembly, to create the Educational Opportunity Program, which grew into a statewide network that’s helped more than 250,000 disadvantaged students study at CSU campuses over the past 40 years.

“Joseph White was clearly an inspiration for every student with whom he ever interacted,” Brown says. “His intellectual skills, his ability to go directly to the point with complex information and his commitment to mentoring inspired others to be like him. He will be missed.”

Funeral services will be held at 10 a.m. on Tuesday, Dec. 12, at Christ Our Redeemer AME Church, 45 Tesla, Irvine, with a reception at 2:30 p.m. in the UCI Student Center’s Pacific Ballroom.

Memorial contributions may be made to the following:

Or a donation can be made online. Go to UCI Giving, click on “See All Schools & Units,” select “Campus-Student Affairs” and then choose “Cross Cultural Center-Dr. Joseph White.”