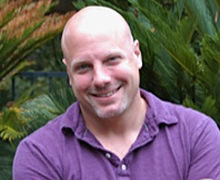 
In December, Kyle Stanford, logic and philosophy of science professor, was honored as the inaugural Distinguished Philosopher in Residence at NYU's new campus in Abu Dhabi, United Arab Emirates. During his week-long stay, he gave four lectures to different audiences, ranging from public to academic: 'Naturalism Without Scientism', 'The Difference Between Ice Cream and Nazis:  Cooperation, Altruism, and the Evolutionary Function of Moral Externalization', 'Catastrophism vs. Uniformitarianism and a Realism Debate Worth Having', and 'So Long and Thanks for all the Fish: Metaphysics and the Philosophy of Science'. Stanford is currently the chair of the Department of Logic and Philosophy of Science at UC Irvine. He specializes in research on the philosophy of biology; philosophy of science, epistemology and metaphysics; and history of modern philosophy.