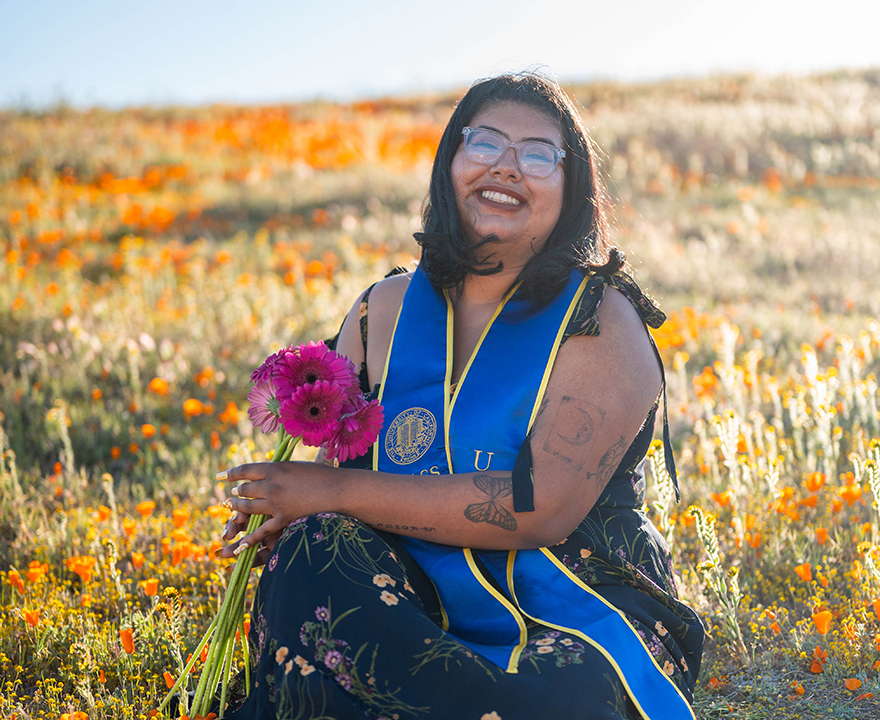 Where did you grow up?

I grew up in Fontana, California in the Inland Empire of San Bernardino County. I grew up as the only child of Juan and Xochitl Molina, a carpenter and self-employed pastelera (pastry chef/baker), who both were born and raised in Zacatecas, Mexico. My parents’ roots in Zacatecas were a big part of my upbringing, something I shared with a lot of other Latinx students at my predominantly Latinx student schools.

Why did you decide to come to UCI and select not one, but three majors?

I decided to come to UCI to expand my horizons beyond the Inland Empire, and to work towards degrees in something I was passionate about.

I came to UCI with the intention of pursuing law, and thus declared political science to strengthen my knowledge. Feeling unfulfilled in classes I did not see myself represented in, I fell in love with ethnic studies when I took my first Chicanx/Latinx studies class. I then began working with high school youth in Orange County and realized my passion for education, and added my third major in education sciences.

After graduating in Spring 2022, I plan on working toward becoming an Ethnic Studies culturally-sustaining, abolitionist high school educator. I have been accepted to UCLA's Teacher Education Program where I will be pursuing my Master's in Education and Single Subject Credential in English during fall of 2022.

I am most proud of co-founding United Students Against Sweatshops at UCI in support of AFSCME 3299, the union that represents service and patient care workers at the UC, in their struggle with the university for a fair contract. During my time organizing with USAS, my peers and I turned out the UCI student body in hundreds to support campus workers historically marginalized by the university, ultimately leading to their contract ratification.

Have you received any major awards while in pursuit of your degree?

I was recently noted as one of the recipients of the Chancellor’s Award of Distinction for the Class of 2022. I have also received two Undergraduate Research Opportunity Program grants for my independent honors thesis research, and won first place in the 2021 School of Education Undergraduate Research Symposium.

In addition to your work as an activist, what’s kept you busy outside of the classroom?

I am currently a TRIO peer mentor at Student Success Initiatives and have been since 2020. I also currently host a weekly radio show at KUCI, UCI’s radio station. I co-founded and organized with UCI’s United Students Against Sweatshops. I have been involved on campus as a SPOP staffer and returner. And many more!

Tell us a bit more about your research.

I completed an honors thesis – which was the winning Justice and Equity Research Paper award for undergrads - which is a qualitative body of counternarratives of high school Black, Indigenous, and other students of color documenting their community cultural wealth. This thesis was completed in the Department of Chicano/Latino Studies with the support of my faculty advisor, associate professor Ana Elizabeth Rosas.

Who has played an important role in your UCI journey?

I have had many amazing femtors at UCI, but Kathy Dong sticks out for many reasons. Kathy was one of the first people who saw me as a colleague and believed in my ability to support and empower students of color by inviting me for two summers to facilitate Community Cultural Wealth Walk for her Summer Bridge students. Her respect for me allowed me to see myself the way others see me. Kathy is also someone who always knows how to ground students like myself and connect us to the right people or paths.

What’s your best UCI memory you’ll take with you after graduating in June?

I am forever grateful for meeting my found family at UCI. Attending a university not created with students of my identities in mind is no easy feat, and the bonds I have formed here are what have retained me in higher education. My favorite UCI memories are any moments shared with loved ones in Aldrich Park, sharing meals, and healing collectively through friendship, laughter, and love.