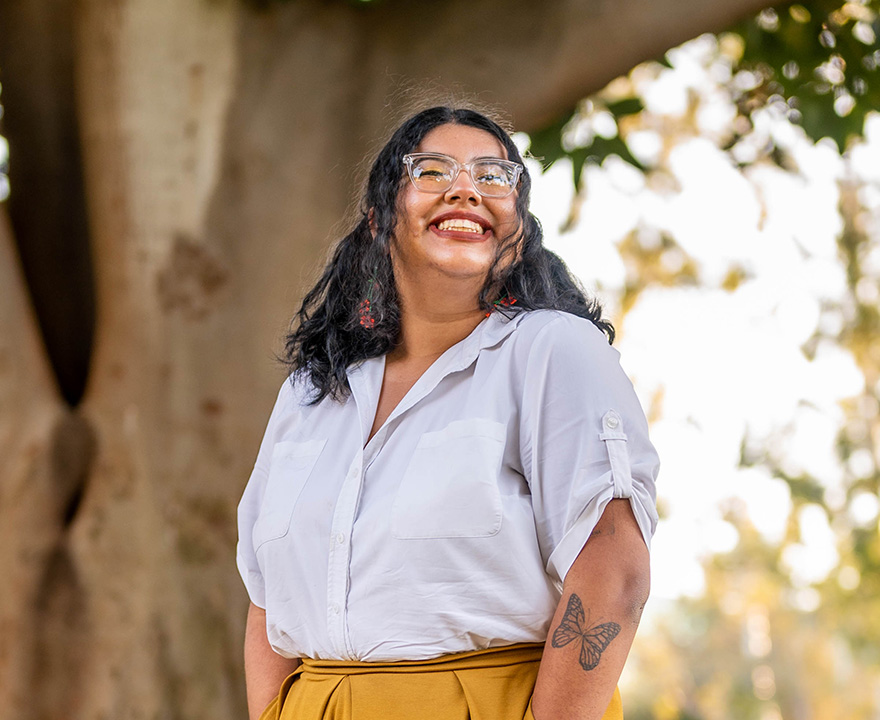 
UCI undergraduate Melissa Molina has not one, not two, but three majors. The senior is studying political science, Chicano/Latino studies, and education science - all while holding down two jobs and pursuing award-winning research. (In June, she won first place in the UCI School of Education’s 2021 Undergraduate Research Symposium.) As if all this wasn’t enough, she was a regional organizer for United Students Against Sweatshops and is in the process of hosting her own K-UCI radio show focused on neo soul music.

Molina – who prefers she/they pronouns - jokes that she thinks about her time organizing like how a star quarterback might look back at the glory days of high school. The undergrad remembers many details of the first time they encountered UCI workers going on strike. Molina was living in the Middle Earth dorms at the time and heard chanting and drumming outside of their window. ¿Qué queremos? ¡Justicia! ¿Cuándo? ¡Ahora! What do we want? Justice! When do we want it? Now! She remembers the green color of the workers’ shirts and how they stood under tarps to shade themselves from the sun.

When she approached the workers, she was immediately welcomed and given food as they explained their situation.

She remembers the loneliness of being a first-year student and how a custodian, also named Melissa, would ask her how she was doing, or how Patty - who worked in one of the dining halls - would tease her about her order. For Molina, these small interactions made a big difference.

“These workers care so much for us students. University labor practices affect students as much as workers, and that is what motivated my peers and me to organize students in support of workers.”

While Molina studied and worked, she also recruited, fundraised, attended conferences, and helped develop goals and campaign plans throughout her sophomore to senior years.

“A lot of what I do comes from seeing my parents struggle and from seeing different injustices in my community,” says Molina.

She grew up in Fontana in San Bernardino County and saw a lot of corporate warehouses replacing centers and businesses that were important to their community. In addition, they noticed disparities in the education system.

“There was such a divide between the south and north. The north was nicer. There was segregation within our own community,” she says.

Molina’s father is a carpenter, and she remembers seeing him tired and overworked. When she first saw those workers on strike in front of the Middle Earth dorms, she was reminded of her working-class family, her working-class community, and the educational disparities in her hometown.

Glenda Flores, Chicano/Latino studies associate professor, first met Molina as a student in one of her gender and ethnicity classes.

“It became apparent she was a brilliant writer,” Flores says. “She would actively share her thoughts and contribute to the discussion. I was impressed with the comments she made and her ability to connect her thoughts to the readings.”

Molina worked as a research assistant for the School of Education and elected to complete an honors research project for her degree in Chicano/Latino studies.

“They are pushing things forward and creating. They have realized the cultural wealth of their Latinx background and have used it to enhance their research,” says Flores.

Part of the reason why Molina has been able to triple major is the interdisciplinary nature of the programs in the School of Social Sciences. The other part is Molina’s doggedness in making sure her courses overlap with her majors.

“She has had a lot of training from faculty here, but she’s also been successful in combining her studies with other majors and beyond on her own,” says Flores.

Like with most students, the pandemic has been a struggle for Molina.

“Being a community-oriented person, it was hard. Community is retention and community was hard to sustain. I had to find creative ways to still connect with people,” she says. “The weird upside was Covid taught me to slow down. Before, my schedule was rough. I was working two jobs, still trying to labor organize, and finish my research project.”

Molina notes what a privilege it has been to work from home during the pandemic. Her family, in comparison, still has to commute to work. Due to the time she’s saved on commuting, she’s been able to practice better self-care - like eating proper meals and generally taking care of herself -  and she’s noticed that both her physical and mental health have improved.

“I realized my own wellness was also an extracurricular and I started saying no to opportunities. I can’t do them without my health. I say I did college in reverse. I did the most my first few years and I’m now setting boundaries. Your self-worth doesn’t come from a packed Google calendar,” she explains.

Molina plans to apply to a teaching credential and master’s program this quarter to become an English or ethnic studies high school teacher. Her desire to pursue teaching stems from her desire to empower students. “I want to teach others to acknowledge their own cultural wealth and resist systems of oppression. Youth are leading the way,” she says.