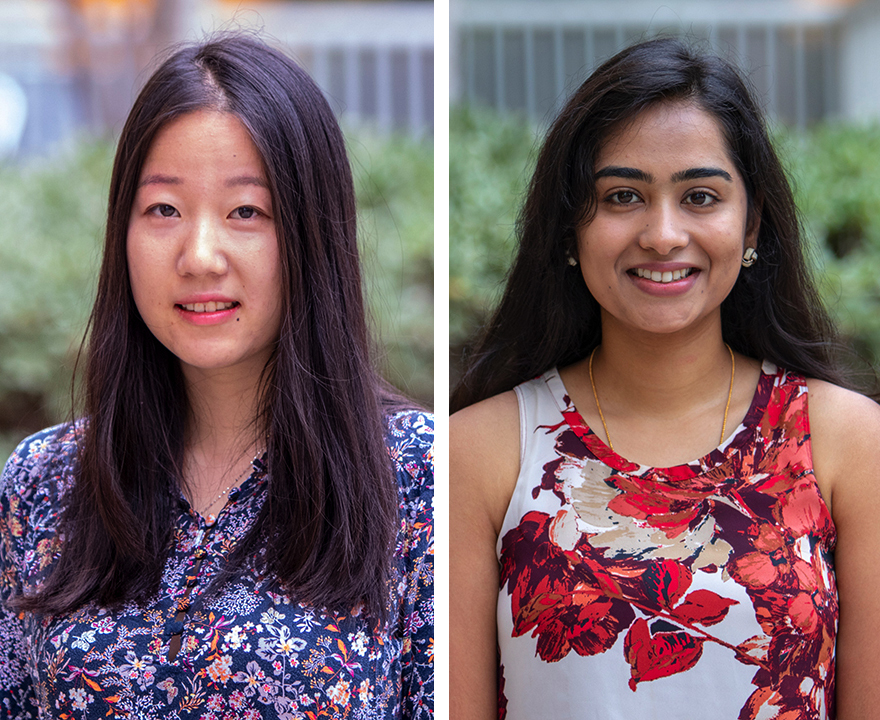 
Two UCI graduate students have been named recipients of the Justine Lambert Prize in recognition of outstanding work addressing foundations of the formal, natural, or social sciences. Jingyi Wu, logic & philosophy of science, and Nidhi Banavar, cognitive sciences, will each receive a $1000 stipend in recognition of their work.

Wu uses mathematical tools to think about philosophically interesting topics in the physical and social realms, and philosophically reflect on such mathematical practices. In her award-winning philosophy of physics paper, she tackles a philosophical debate about the explanation of what is called “universality” in critical phenomena, which is an empirically observed fact that when systems as diverse as water and magnets undergo critical phase transitions, they behave in an almost identical fashion macroscopically speaking.

“Our current best way to explain universality, the renormalization group method, makes use of systems with an infinite number of particles,” she says. “This is puzzling because it would make infinite limit systems indispensable in explaining universality. In my paper, I provide a solution to the puzzle by developing an explanation of universality that dispenses the use of infinite limit systems.” Her work was recently published in Synthese. In addition to her work on the foundations of physics, Wu builds mathematical models to study diversity and marginalization in academia and scientific communities. Wu earned her undergraduate degree in philosophy and mathematics at Middlebury College in Vermont and is in her fourth year of her Ph.D. program at UCI.

Nidhi Banavar, also in her fourth year at UCI, develops cognitive models to test how decisions and the processes behind them influence each other as individuals make sequences of choices. “Scientists, governments, and corporations are increasingly trying to classify how people make decisions in order to better support them – but are they measuring what they think are? My research questions a fundamental assumption in behavioral economic methods that quantify human tendencies in decision making under uncertainty,” she explains. “This is important for deriving measures that are more representative of what humans are actually doing, and because the numerical values we infer are often used to characterize differences between healthy and sensitive populations.”

Her award-winning paper synthesizes the many ways risk preference (preferring sure bets vs. risky gambles) and temporal discounting (preferring smaller immediate rewards vs. waiting for larger rewards) are defined and measured. She argues for a philosophical and methodological reconceptualization of experimentally-inferred measures of these parameters, one that takes into account the possibility that people treat the world as sequential, whether rational models expect them to or not. Banavar earned her undergraduate degree in mathematics.

The Lambert Prize - open to all graduate students at UCI, regardless of department or school affiliation - was made possible by a generous bequest from the sons and friends of Justine Lambert.