Zots to be thankful for 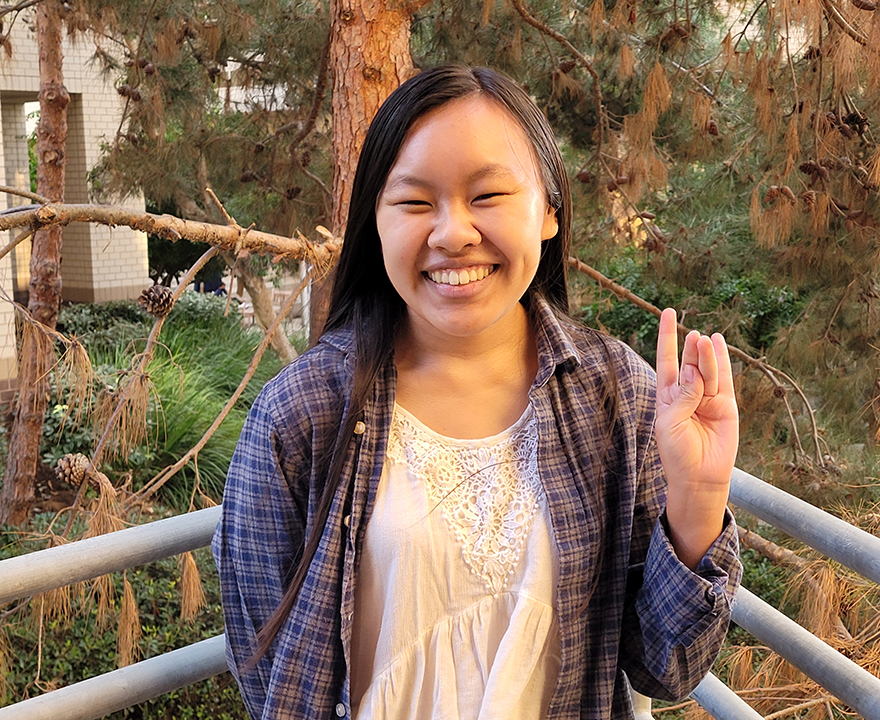 Zots to be thankful for


Raised just a short jaunt up the 5 freeway in La Palma, Kristi Ryono didn’t travel far for college, but the journey has been transformative just the same. In spite of personal challenges and fears, she’s been able to persevere, reach beyond her comfort zone, and keep moving forward thanks to strength of will, a little luck, and a lot of gratitude. Now in the midst of her final year as an Anteater, Ryono is relentless in her optimism, hope for the future, and finding positive opportunities in any situation.

To look at Ryono now—a double major in social policy & public service and education science, Peer Academic Advisor, Peer Health Educator, SOY Center intern, former Antleader mentor, and overall rockstar college student—you might be surprised to hear her describe herself as “shy” and “introverted.” And while most of her current extracurriculars require mentorship and leadership in some capacity, she didn’t always have the confidence to take on those roles.

“I’ve always been a shy person in general, but I knew I didn’t want to let my anxiety stop me from trying things,” Ryono says. “I found the network of UCI to be critical in encouraging me to come out of my shell.”

Her UCI network was key, but it was actually her struggles to adapt and settle in during her first year that set everything in motion. As a brand new (and admittedly anxious) freshman, Ryono was overwhelmed and struggling to determine her major, how to make friends, and how to get the most out of her time on campus. So she decided to visit one of the few resources she knew about at that point: the Peer Academic Advising Center.

“Visiting the PAA Center opened so many doors that I didn’t even know were there,” she says. “It was a huge relief, and everyone was so sweet and welcoming and they were able to really guide me. I loved it so much I actually wanted to get a job there right away! But I was too new.”

Instead, the advisors introduced her to other organizations, volunteer groups, and clubs she could join and encouraged her to apply as a PAA after she had a bit more campus experience. She got involved with Circle K International, started volunteering at the FRESH Basic Needs Hub on campus, and started interning with UCI’s Global Connect. She loved the opportunities to help others, interact with kids in need, and meet other like-minded students. Through friends in these groups, she learned more about the social policy & public service major and was even more drawn to it.

Things were falling into place and each connection led to a new opportunity, but Ryono was still struggling with feelings of anxiety and homesickness. She tried to muscle through it, but when it wasn’t getting better, she knew she had to address it.

“My first year was really hard,” she explains. “I didn’t know why I was feeling so homesick when home was so close. I found myself not wanting to pursue certain opportunities because I was too anxious. It was very difficult at times because my heart wanted to do so much, but my mind was telling me no.”

It was a friend she had met through another club who told Ryono about the UCI Counseling Center and suggested she reach out to an advisor there. She did, worked hard, and eventually was able to overcome the worst of feelings. But the experience left a significant impact on her - so much so that she decided to join the Center of Student Wellness and Health Promotion as a Peer Health Educator to help others going through similar situations, a role she still holds today.

Now, despite the normal struggles of college and the pressure to decide what to do next, Ryono is soaking in every moment of her senior year. She was hired for the PAA job that she’s wanted since her freshman year, and she’s considering grad school options and weighing the merits of a career in either teaching, counseling, or nonprofit work. Even the ongoing pandemic can’t dampen her spirits.

As strange as it sounds, she says the past 18 months have made more opportunities available to her because of the virtual environment the world has been operating in. She joined a coed service fraternity that was easier for her to do virtually because (according to her) she’s still shy. Ryono also had the chance to be a part of an international volunteer program but didn’t think she’d be able to manage the travel portion. Because that went virtual too, she could still participate.

“It’s really about perspective,” she says. “I think about all the opportunities I’ve had here, and about the resources UCI offered me, and I’m so thrilled I ended up here. And I’m proud. Things have been challenging, but I pushed myself, and I just think ‘wow, look at where I am now.’”