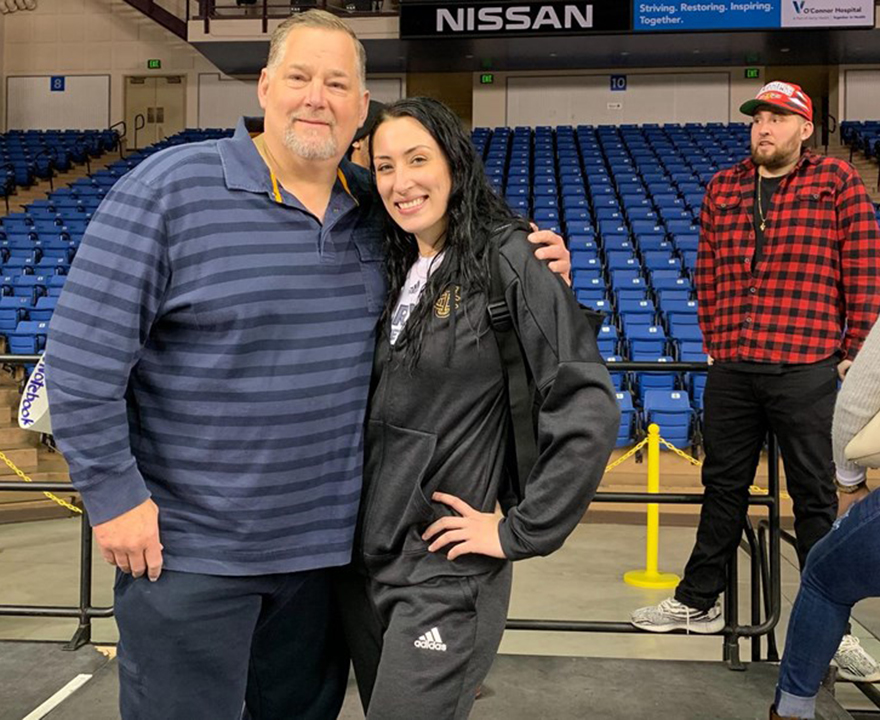 
Just steps from her locker room door, Sabrina Engelstad connects regularly with the reason for her existence.

It is in a back hallway of the Bren Events Center that she steps toward a framed poster-size photo of her father Wayne Engelstad and acknowledges the image of the former Anteater men's basketball standout and UCI Athletic Hall of Fame honoree whose family legacy she is enhancing as a starting center for the women's basketball team.

"It's kind of his legacy, but I'm trying to make it my own," said the 6-foot-2 post player who averaged 6.1 points and 5.0 rebounds per game during the 'Eaters' 9-1 start. "I remember coming here for his hall of fame induction (in 2006) and seeing all the people who knew who he was. All the fans were like 'Oh, Engelstad. I used to watch you back in the day.' I was like 'That's my dad. That's so cool.'"

Wayne, who played 11 games with the Denver Nuggets as an undrafted free agent to begin a 12-year professional career that included stops in the Continental Basketball Association, Portugal, Spain, Australia and Argentina, played at UCI from 1984 to 1988. A 6-8, 245-pound sharpshooter out of Rosemead, he averaged 23.6 points and 7.5 rebounds as a senior, when he made 40 of 91 three-point attempts (43.9 percent) and was named MVP of the Pacific Coast Athletic Association Tournament after leading UCI to the title game.

Wayne, an Antioch resident soon-to-be retired after 17-plus years as a sheriff's deputy, regularly makes the trip from the Bay Area suburb to his old stomping grounds to watch Sabrina play.

"It's awesome," Wayne said of seeing his daughter perform at his alma mater. "I mean it's like a dream come true for me and I think for her too. I know there is a picture of me right outside their locker room and I told her I had them do that on purpose, so I can keep an eye on her. She said 'Dad, I fist-bump you every day.' It's an amazing feeling."

Sabrina, who began her collegiate career at Saint Mary's College, then transferred to UCI after missing two seasons following surgery to mend a fractured vertebra in her lower back, said she would not be playing the game were it not for her dad.

"I would give him all the credit," Sabrina said of her father, who steered her onto the court after her early flirtation with soccer.

"My dad and mother and brother (also named Wayne, who is a senior starting forward for NAIA member Pacific Union College in Napa) all loved basketball," Sabrina said. "But at first I kind of rejected it. I was more into soccer and singing at school. But my dad told me I had too much natural talent to not take advantage of it. He said I was too tall for soccer. He forced me to play basketball."

Wayne said he signed Sabrina up for a CYO league without her knowledge when she was in the seventh grade.

"I told her just before the season was going to start that she had practice the next night," Wayne recalled. "She said, 'What do you mean?' I said 'Yeah, you are playing basketball this year and you are going to love it.' She cried."

After an undefeated championship season with many teammates she went on to play with for four varsity seasons at Heritage High near Antioch, Sabrina fully embraced the family's passion for the game.

"After they won the (CYO) championship, she was crying tears of joy," Wayne said. "She apologized to me and told me she was so glad I made her play."

Sabrina said Wayne took a hands-on role in developing the game of both her and her brother.

"He worked us out all the time," said Sabrina, who believes she shares her father's determined mindset and intense temperament on the floor. "When I hurt my back, they told me I might not ever play basketball again and it might never be 100 percent. But here I am. After I left Saint Mary's, my dad got me back in shape, touching the ball and moving again. He definitely shaped me to be a mentally tough player and to be able to take a lot of coaching."

UC Irvine head coach Tamara Inoue, in her third season, said Sabrina originally gave a verbal commitment to then-UCI coach Doug Oliver, just days before Oliver announced he was stepping down. Inoue, who attempted to recruit Sabrina out of high school as an assistant at New Mexico State, said the name rang a bell when Wayne contacted her to gauge the coach's interest in bringing his daughter to UCI.

"I promised Sabrina one year, and from that point forward she has been tremendous," Inoue said. "She was a great surprise, not just for her abilities, but for her leadership. I trust that she is saying the right things in the locker room. She is probably the most mature player on the team and she has a good mind; a good basketball mind. I think that has to do with her dad and growing up watching what he went through in the game.

"I think Sabrina maybe felt a little pressure coming here, because her dad was a phenomenal player here," Inoue said. "But she has found her own place. She wants to create her own legacy here and she is doing a fantastic job accomplishing that."

Inoue said Sabrina, a double major on track to graduate with degrees in sociology and education, would make an excellent coach when her playing days are over.

Inoue also smiled when asked about Wayne's enthusiastic support from the stands.

"You know when he is in the building that's for sure," Inoue said of Wayne. "I can hear him during games, which is great. He can get after the referees, which I can't. He says things and in the back of my mind, I'll say 'Yeah, keep saying that, because I definitely can't.' When Wayne comes in, you don't want to mess with him."