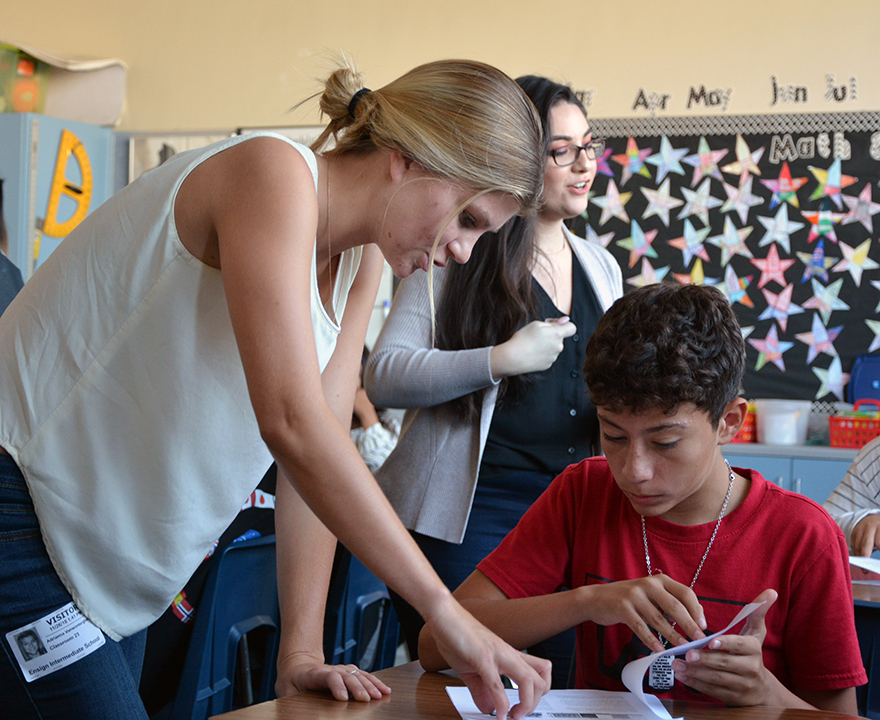 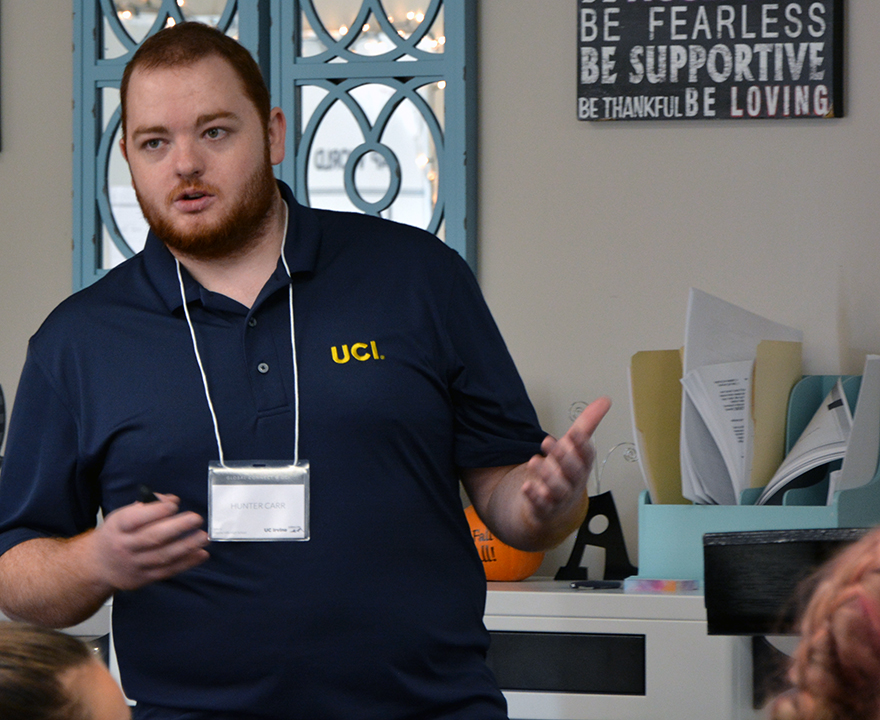 When UCI undergrads Adrie Van Wonterghem and Hunter Carr were in high school, they took a course that brought UCI-level material and students into their Orange County classrooms. The experience opened their eyes to real world global issues and gave them direct access to university student role models. When it came time to make a college choice, UC Irvine was already on their horizon. This year, both Van Wonterghem and Carr have come full circle as UCI Global Connect interns in OC high school classrooms. And when they graduate in 2019, they’re planning to pursue careers in education and international relations, thanks to their time in Global Connect.

Adrie Van Wonterghem is passionate about education. A third-year student at UCI, the political science and education double major has plans to graduate early, get her master’s degree, and pursue a career as a teacher and eventually, as a principal. When the highly driven Anteater was a freshman at El Toro High School in Lake Forest, she enrolled in a course that she says gave her a big head start in achieving these goals. The class was Model United Nations, and the curriculum was guided by UC Irvine’s Global Connect program. Each week, students from UCI would come to her classroom and team-teach current issues in international studies alongside her high school teacher.

“It was such a great experience working with college students and having access to their experience, and seeing through them what we could achieve,” she says.

The platform of real world, applied info delivered by kids not much older than her piqued Van Wonterghem’s interest in becoming an educator, and in attending UCI.

“Global Connect gave me a head start in knowing what I wanted to do - which helped me focus and come into college knowing which classes to take,” she says. “The program showed me that I could teach not just the basics, but that I could apply education to a more global perspective to things happening in the real world and go beyond relaying information to engage students in what’s going on around the world.”

The experience and exposure to UCI through Global Connect – and having several Anteater alumni on her high school’s teaching staff - played a role in her decision to attend UCI four years later, and of course, get involved in Global Connect as one of the program’s high school interns herself.

“One of the best parts about Global Connect is seeing the impact it has made in our high school students’ lives,” says Jessica Bit, the program’s current director and a 2009 UCI graduate who was involved in Global Connect from 2007-09. “It’s so rewarding to see our former students enroll at UCI in a major that was inspired by Global Connect! It’s even more meaningful when they intern with Global Connect so that they can give back what they learned to the younger generation."

Launched in 2001, the university-led high school curriculum program has reached more than 8,500 students in Newport-Mesa and Saddleback Valley school districts. Topics covered under the UCI-created curriculum include nuclear proliferation, terrorism, and cybersecurity in a global society – areas not covered under current state education standards but topics in which UCI researchers excel. The real-time course content reflects the continually changing world landscape while bringing new and updated university research directly to high school students. And the year-long curriculum is a University of California regent-approved "a-g" elective.

From the UCI side, Global Connect is a hotbed for outstanding students with educational aspirations. Over 700 UCI undergraduate and graduate interns have gone through the program, helping develop and teach course content. More than two-thirds of the undergraduates have gone on to attend graduate school or become educators – like Van Wonterghem plans to do. Eight former interns have received Fulbright scholarships, and in November, Manuel Chavez, a Global Connect and UCI alumnus, became one of the youngest Anteaters ever to be elected to public office when he ran for and won a seat on Costa Mesa’s City Council, just one year after graduating from UCI.

"It’s such an honor to be able to play a role in helping to develop our Global Connect interns into leaders,” says Bit. “It’s my greatest joy sending them off into the real world and seeing the impact they make in their fields."

Ask Hunter Carr, Global Connect intern and senior international studies major at UCI, how he got involved in the program, and his story starts similarly with his high school experience.

“I took the Global Connect course at Laguna Hills High School as a freshman, and I loved it. It was such a unique opportunity for a high school kid - not really the experience you usually get. Our UCI interns would bring up current events from the real world to start up the class, and we’d use these talks to get into the modules – that was really cool.”

He specifically remembers the module on globalization as his favorite and most eye opening.

“Up to that point, I hadn’t really been introduced to globalization formally, so it served as a framework to bring together all these separate topics I had knowledge of and helped explain to me why the world works the way that it does,” he says.

The course cemented his desire to go into a career involving international relations, travel and work. He ended up taking a roundabout route to UCI through community colleges and a Cal State university, and as soon as he landed on campus, he sought out to be involved in Global Connect from the university side.

“It’s a good intro into the classroom,” he says. “You get to be a great resource for a particular group of students, and that’s a really cool, fun experience. Working with the high school students and seeing them relate and make connections to the things they know is really rewarding.”

When he graduates, Carr hopes to join the Coast Guard, and he says what he’s learned in Global Connect will be a huge boost.

In January, the program will be under new directorship with Stephanie Hertel at the helm. Also a program alumnus, Hertel plans to maintain the program trajectory while growing its reach.

“I hope to expand the program by bringing it into the spotlight and catching the attention of more faculty and graduate students. Additionally, we’ve begun to reach out to businesses in our community, drawing on their expertise and industry perspective to create an even more engaging, relevant experience for our high school and undergraduate students,” she says.

More good things to come, without a doubt.