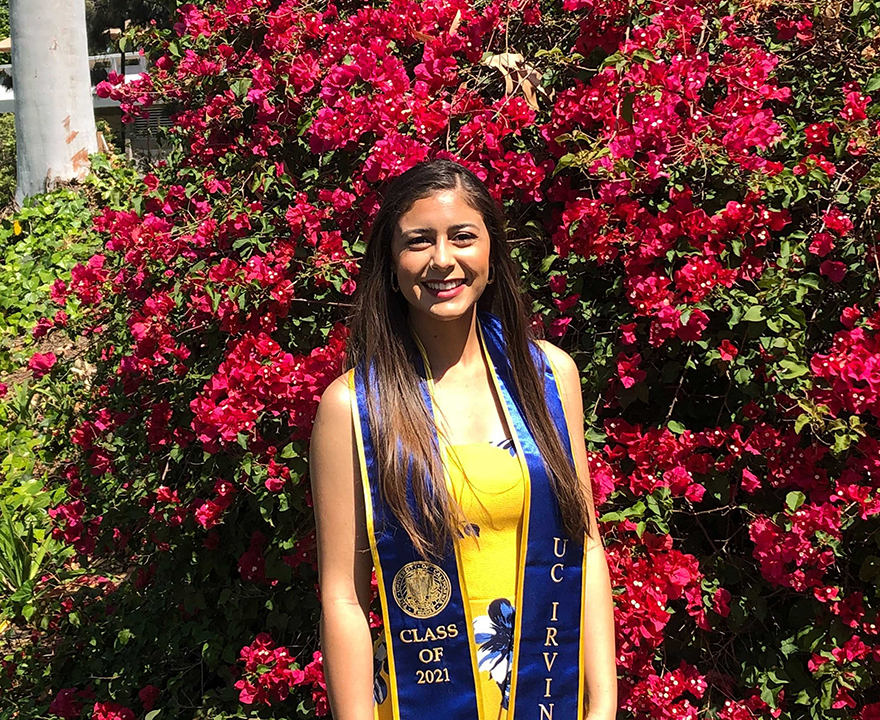 What are some of the major milestones in your life?

When I was 15 I began battling two unknown illnesses that went undiagnosed for a year, and required an entire change in dietary lifestyle to treat. My second year I helped my friend start the Cognitive Science (student) Association at UCI, which has grown into a collaborative club with UC Berkeley, UC Santa Cruz and Stanford. My third year I was promoted to Student Manager at Wahoo’s Fish Taco’s in the Student Center. During the summer of 2020 I was accepted into the PIRE Program of Language Sciences, where I received a fellowship and built the foundations to my current honors thesis.

Why did you decide to come to UCI and study cognitive sciences?

I decided to come to UCI because I was accepted into the cognitive sciences major as well as the Campuswide Honors Collegium, whereas I was not accepted into an honors program at other schools. I have always wanted to work with individuals with severe developmental disabilities, but I didn’t know how. So, I chose cognitive science so I could learn how the brain works, and then use this understanding to help individuals with disabilities to build motor and language skills.

What activities have you been involved in as an undergrad?

At UCI I worked at Wahoo’s Fish Taco’s while school was in session. I also am the co-founder and vice president of the campus organization the Cognitive Science Association. When I went home for school breaks I would work as a camp counselor at the Santa Barbara Zoo and the Cornerstone House of Santa Barbara. As of January I began working as an instructional aide for a local elementary school.

Tell us a bit about your research.

I am doing research in the Computation of Language lab at UCI. Here, I am studying metaphor comprehension differences between neurotypical children and children diagnosed with Autism Spectrum Disorder. Specifically, I am interested in using Bayesian Cognitive Modeling to reproduce the behavior seen in current literature.

My family has played a huge role in my life by supporting me through school, my various jobs and activities. Not only were they there to celebrate the accomplishments but they also would come to my rescue at the drop of a dime when I needed help.

Professor Lisa Pearl and graduate student Zachary Rosen have played an important role in my life because they helped me find a way to research my interests using methods I never had experience with, and I learned significantly more than I thought I ever would. Through research with them I also met a lot of amazing researchers who share my interests.

My friends played a huge role in my life because together we navigated a very small major and built a plethora of resources for incoming students, as well as sharing our trials and tribulations, and providing me with a much needed relief from school and work.

Are there any unique circumstances that have had an impact on who you are today?

I would say that all of my activities, many of which I have described here, have all had a substantial impact in where and who I am today. Many of my accomplishments have all been in pursuit of the same goal – to work with individuals with developmental disabilities – and I can say that I have learned something valuable and transferable in everything that I have done.

What are the biggest challenges you have faced in getting to where you are today?

Prior to the pandemic I always struggled to manage all of my activities with my academics, often forgetting I need rest and hobbies to enjoy for myself and not for a greater purpose. During the pandemic I faced a lot of small challenges that happened around the same time. Besides basic daily life for everyone changing, I was furloughed from my job, my car had repeated problems until it eventually stopped working, and was attempting research for the first time on a computer that was not capable of handling the extra workload.

Prior to COVID I would most often be found in the Student Center or at the Starbucks in the Paul Merage School of Business.

What’s your best memory from your experience at UCI?

My favorite memory was taking graduation pictures with one of my friends because we were able to walk the campus freely and reminisce on our time at UCI.

When will you graduate and what do you plan to do after?

I plan to finish my degree in Spring 2021. After, I will return to one of my summer internships as I look for a full-time position in ABA therapy or a related field.