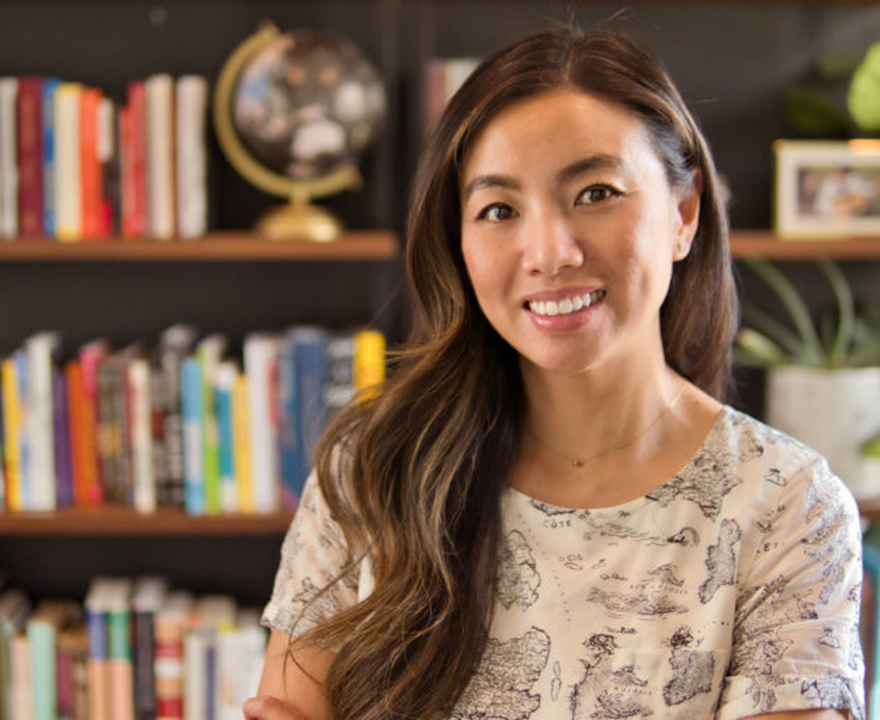 
When Virginia Nguyen – proudly named after her birth state – started at UCI in 1998, she felt she had manifested the American dream. Her parents, Vietnamese refugees, had come to the United States in search of a better future and, through diligent work, had found it. With the same perseverance, Nguyen had excelled in school, taking every opportunity that was offered to her and becoming the second in her extended family to graduate from high school. She’s also the very first to attend college.

A political science class, however, transformed Nguyen’s outlook – and, ultimately, her future. Questions posed shook her foundational belief that hard work inevitably leads to success. She began to question whether the world is truly fair, whether everyone has the same opportunities. As a political science and sociology double major with an education minor, Nguyen sought answers.

At the time, a minor in Asian American studies was unavailable, so she “carved one out” by taking any classes she could find on Asian American experiences and history. She also explored the intersections among marriage and family, poverty and society, and power and identity.

“Each of those courses continued to shape my understanding of what equity and justice mean. Once my eyes were opened to it, I needed to learn more,” Nguyen says. Her social science classes led her to a love of history, as contemporary social issues can often be tied to events in the past. The more she studied history, the more her understanding of the world grew – as well as her empathy.

Knowledge, in fact, struck Nguyen as the key to enacting social change. “I trust that if people know better, they will do better,” she says. “The more I educate, the more people will choose to do better.”

Nguyen enjoyed her UCI education so much, she says, that she returned for a Master of Arts in Teaching, and a credential, in 2003. Faculty such as Carol Booth Olson, Bruce Baron and Nancy Christensen, who had mentored her since she was an undergraduate, set the example for the kind of impactful educator Nguyen would one day become.

Now the alumna is in her 16th year of teaching. Currently, she’s at Portola High School in Irvine, teaching world and U.S. history, as well as literacy skills, to ninth- and 10th-graders and Intro to History to students who are new arrivals to this country.

But Nguyen is much more than an educator. A big part of her role is being a vocal advocate for the local and broader Asian American and Pacific Islander population, along with other communities of color. For her, teaching and advocacy are part of the same mission. “Teaching is a place where you live and breathe this idea that humanity can be better and that there’s always room for growth,” she says.

On-the-job activism
Nguyen began her education career at Orange County School of the Arts. Then she moved to an affluent Chicago suburb, where she taught for seven years. The school she worked at had abundant resources that encouraged Nguyen to grow as a teacher-leader, but it also exposed her to disparities in public education. While generous funding allowed her school to flourish, educational facilities down the road lacked such basics as air conditioning.

She and other colleagues spoke out in favor of fairer funding and stronger teacher recruitment for all schools in the area. Nguyen became active in the National Education Association so that her advocacy could extend to the federal level. She took advanced equity training courses for nearly a decade. And as she empowered others, Nguyen began to realize her own strength.

“I was in a district that was primarily white, so I found myself having to share a lot of what it was like to be a woman and a person of color,” she says. “That’s where I found my voice, because so many of my colleagues were open to hearing my story.”

In 2014, she delivered a presentation on the myth of the model minority to two districts in the Illinois suburbs. “The model minority myth is meant to uplift Asians, but it also divides us from other marginalized communities,” Nguyen says. “We’re put on a platform so that other communities can be knocked down when they’re compared to us, because we’re considered the example.” She notes how the myth has led to the exclusion of AAPIs from equity discussions, despite their high poverty rates in certain subcommunities.

Inspiring change in Irvine
Nguyen says her “boldest and bravest” moment happened last year, in the aftermath of George Floyd’s murder, which spurred nationwide discussions on systemic racism. She wrote a letter to her current superintendent, board members and other district leadership in which she spoke of her own hurt but also how, as a history teacher, she felt they had a responsibility to do better for their students – and she believed they could. In the missive, Nguyen asked that at least 50 percent of the professional learning for the upcoming school year be directed toward anti-racism training. The call to action was met. Colleagues who copied her letter also received favorable responses.

By the start of the 2020 academic year, Nguyen – together with UCI School of Education alumna Stacy Yung and lecturer Jon Resendez – led the diversity, equity and inclusion training for the secondary (sixth to 12th grade) part of the Irvine Unified School District, which serves 35,000 students. Since then, she has helped form a districtwide equity team, as well as individual equity teams at Portola and other schools in the district.

Over the past year, Nguyen’s community has been the target of violent acts of overt racism. After COVID-19 struck, the microaggressions that Asian Americans typically face – such as being perceived as perpetual foreigners – became full-blown aggressions. Hate crimes against the AAPI population have skyrocketed since the pandemic began, and Nguyen, her family and her friends have experienced them firsthand. Amid this wave of racist terror (including the March killing of eight people, six of them Asian women, in Atlanta), she has felt an urgent need to do more for her Asian American and Asian students.

In response, Nguyen and Yung created and curated Educate to Empower, a collection of resources, lessons and workshops for teachers looking to support AAPI individuals through greater and more accurate representation in the classroom. Included is a fill-in-the-blank letter template addressing anti-Asian racism that anyone can use to correspond with civic leaders.

“Asian American women are often quiet because we’re internally managing our impostor syndrome. We’re not ones to push into spaces,” she says. “But I’m learning that if I continue to be quiet, the story of the Asian American experience will continue to be invisible. I’m speaking for my own children, who are 7 and 9 right now, because I want them to feel that they have a voice that is welcome.”

Publicly launched on Oct. 4, 2019, the Brilliant Future campaign aims to raise awareness and support for UCI. By engaging 75,000 alumni and garnering $2 billion in philanthropic investment, UCI seeks to reach new heights of excellence in student success, health and wellness, research and more. The School of Education and the School of Social Sciences play vital roles in the success of the campaign. Learn more by visiting https://brilliantfuture.uci.edu/school-of-education/ and https://brilliantfuture.uci.edu/uci-school-of-social-sciences/.