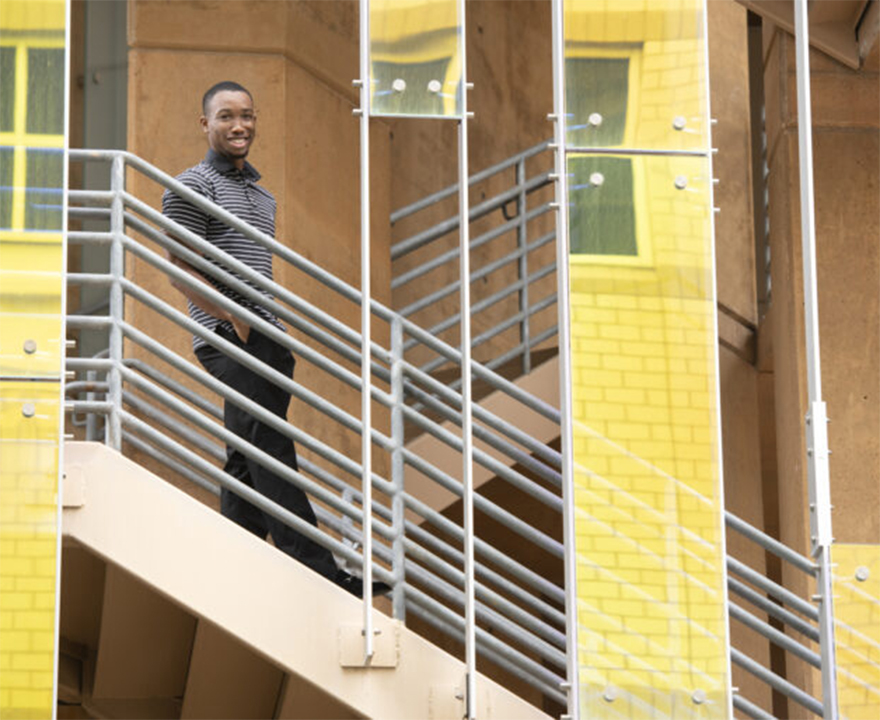 
Vanilla ice cream and gourmet chocolate might soon carry a dash of Anteater DNA, thanks to students David Sanusi and Yohan Ranaivo.

Last summer, the pair founded Madagascar Savors, which imports vanilla, cocoa beans, cinnamon and other spices from the East African island nation for which their company is named.

The original plan was to supply baking ingredients to elite L.A. restaurants, but a twist of fate has them negotiating a deal that could turn both into millionaires.

Ranaivo, who hails from Madagascar, “opened up about his life and his family connections” to the island’s spice industry, in which his aunt is the nation’s second-largest producer of Malagasy vanilla and cocoa beans, Sanusi recalls.

After enrolling at UCI, Ranaivo says, he tried to form a spice import company but ran into problems because he’s not a U.S. citizen. So Madagascar Savors incorporated under Sanusi’s name.

The partnership enabled both men to fulfill cherished dreams. “My dad died of cancer when I was young, so finances were always rough,” Sanusi says of his South Los Angeles upbringing. “That financial insecurity has been the driving force behind my passion for entrepreneurship.”

To get Madagascar Savors underway last summer, the spice guys took delivery jobs with Instacart to pay for their initial shipment of peppercorns, cloves and cinnamon.

“We started with 5 pounds of each product and broke them down into very small samples that we gave out to restaurants,” Sanusi says.

As the pair began making sales, things took an unexpected turn. Through a networking event in their dorm, Ranaivo met a Temecula marketing consultant with spice industry connections. He joined the team as a mentor and liaison to potential buyers. Soon after, one of the mentor’s former business associates – who runs a large dairy firm – “said he was interested in all the vanilla we could supply” for distribution to ice cream manufacturers and grocery stores, Sanusi says. The deal could be worth millions, he adds.

Madagascar Savors promptly shifted gears to vanilla – and chocolate. Working with Ranaivo’s aunt, the company also secured exclusive rights to sell her cocoa beans in North America. Known for notes of citrus and raspberry in its flavor profile, Malagasy cocoa is mainly purchased by gourmet chocolatiers in Europe.

Sanusi serves as Madagascar Savors’ chief cocoa ambassador, cold-calling U.S. candy manufacturers. Unsolicited sales pitches aren’t easy. “It’s like a mental beatdown,” he says. But the graduating senior remains optimistic: “There’s a lot of untapped potential in America, and I see us being a very big player in the industry. Our goal for the next two to five years is to sell 75 tons of cocoa beans a month.”

In the meantime, after receiving his bachelor’s degree this summer, Sanusi hopes to enroll in UCI’s Master of Innovation and Entrepreneurship program to help “build the relationships and knowledge necessary to grow and manage a global company. … UCI has taught me how to think globally and that everything in the world is interdependent.”

Closer to home, he and Ranaivo are also working on a dating app, Sanusi says: “It has the potential to change how college students meet and interact, and we’ve already started running experiments to see if our hypothesis is valid. Stay tuned!”

Sanusi’s pursuit of higher education has been aided by two philanthropic scholarships: the 2021 David Rosten International and Community Service Scholarship, awarded to students planning a career in international affairs and/or public/community service; and the 2020 Beall Applied Innovation Creativity & Innovation Scholarship, which he snagged for a proposed phone app that would let students share meal plan points from university cafeterias.

Sanusi is one of many UCI students grateful for such philanthropic support. The awards partly cover university expenses and enable recipients to take part in activities outside the classroom – such as research or community service – that enrich their college experience and increase their success after graduating. UCI offers nearly 1,000 scholarships funded by generous donors, giving students more than $4 million in academic aid.

UCI’s Brilliant Future campaign, publicly launched on Oct. 4, 2019, aims to raise awareness and support for the university. By engaging 75,000 alumni and garnering $2 billion in philanthropic investment, UCI seeks to reach new heights of excellence in student success, health and wellness, research and more. The School of Social Sciences plays a vital role in the success of the campaign. Learn more at https://brilliantfuture.uci.edu/uci-school-of-social-sciences.