Creativity in the face of adversity 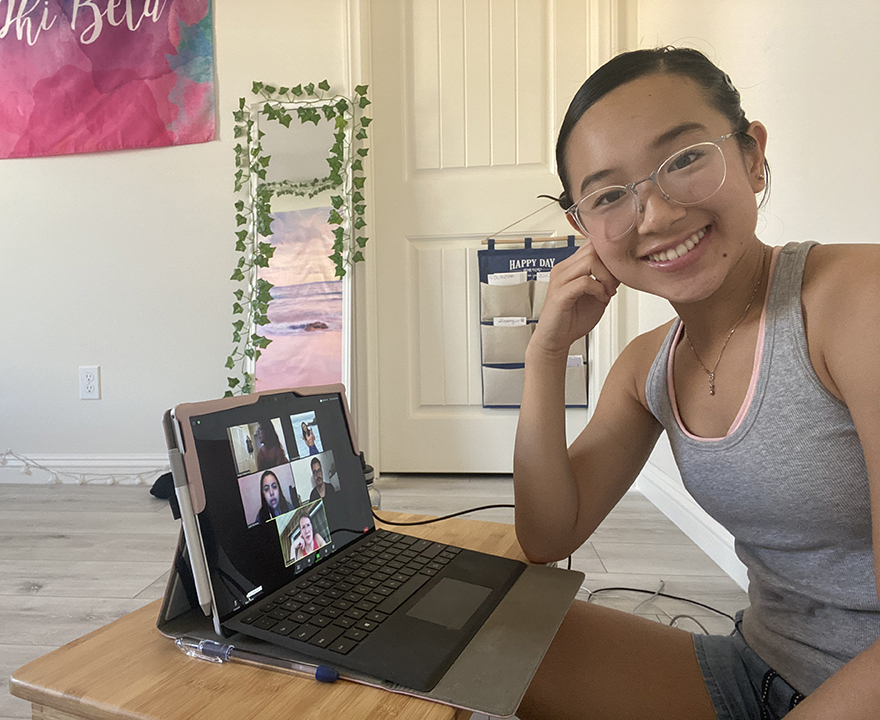 Creativity in the face of adversity

First generation transfer student Dayra Perez Bernal was planning a trip to Granada, Spain this year — her first time to Europe — to continue research she’s been conducting in UCI’s  Bilingualism, Mind and Brain Lab. She would be among the  first cohort of UCI students to participate in a new Partnerships for International Research and Education (PIRE) grant, a program funded by the National Science Foundation that sends students abroad and to partner institutions in the US to conduct research on various aspects of language science. Her classmates were eagerly anticipating their own research trips to the Netherlands, Puerto Rico, the UK, New Mexico, Florida and Beijing.

Perez Bernal’s experience in the PIRE program could have been another example of disappointment and missed opportunity in 2020. Instead it’s one of creativity in the face of adversity, and international bonds strengthened amidst a global crisis.

“Our colleagues everywhere in the world are having the same problems conducting research right now, leading to a radical shift to online research,” says Judith Kroll, Distinguished Professor of language science at UCI, and principal investigator for PIRE at UCI. “In the process, we’re all learning some new things, and at the point when we’re able to return to our physical labs, we will have new skills, new ideas, and new ways of collaborating.”

When the pandemic began, Kroll wasted no time re-envisioning how her students could gain critical international research experience in spite of the pandemic. Together with colleagues at Pennsylvania State University, the home of the PIRE grant where Kroll was previously a faculty member, she proposed to NSF that PIRE fellows this year would stay safely in their homes, convert their research to online formats, and connect via Zoom with PIRE partner institutions around the globe. NSF approved the plan, launching PIRE’s first fully online international summer exchange program for 13 UCI and seven Pennsylvania State University students.

Some of the language research conducted by Kroll and other PIRE partners involves lab experiments with human subjects, such as electroencephalograms (EEGs) and eye tracking. But with COVID-19, such in-person experiments are out of the question. They were forced to rethink the way they work.

“We are doing everything differently,” says Teresa Bajo, head of the Memory and Language Group at the University of Granada. As a PIRE partner, Bajo has hosted U.S. students visiting Granada since the program began in 2010. “We adapted by thinking of what questions we were trying to answer, and adjusting the experiments to try to answer the same questions with different procedures.”

In many cases, this meant shifting from experiments involving laboratory equipment to newly developed platforms that enable similar experiments to be conducted online. Undergraduate students in PIRE quickly learned new programming languages and online research tools such as Qualtrics, Finding Five and Gorilla, and built websites to guide their research subjects through the process — skills they would not have gained through the traditional PIRE program.

“What these students had to learn in a short amount of time was really incredible,” says Giuli Dussias, professor of Spanish, linguistics and psychology at Penn State, and the lead PI on the PIRE grant. “They were able to rise to the challenge, and the way that they did it says something wonderful about who they are.”

In addition to experimental research, some of the 13 UCI PIRE students spent the summer developing computer models, also using online tools.  The research the students developed over the 10 weeks of the PIRE program this summer will be deployed in the fall, and they will regroup and share their initial findings in early November.

The goal of the program was to provide summer support for students who might otherwise have not been able to find work easily during the pandemic and to enable them to continue to develop their research in ways that will enhance their success in the pursuit of later graduate and professional studies.

The students’ research projects are as diverse as the countries they are working with. They range from exploring code-switching in different cultural contexts to dissecting the grammatical nuances of a language spoken by the Atayal people of Taiwan, and understanding emotion behind words in a foreign language to measuring how language learning benefits from immersion.

To keep tabs on all of this disparate research taking place in dorms, home offices and at kitchen tables, Kroll and her colleagues organized the PIRE students in teams.  Together with a core group of UCI faculty, graduate students, postdoctoral fellows, and laboratory managers at UCI and their PIRE partners, the students met frequently to develop their projects and discuss their developing collaborations.

For the PIRE students working on aspects of second language learning and bilingualism, the focus of Kroll and Dussias’ research, there was another perk in the long pandemic summer.  What was normally a weekly lab meeting in the Kroll lab, a gathering of roughly 20 lab members to discuss ongoing research developments, read papers, and analyze controversies in the field, became something more.  As more and more researchers in the collaborating groups learned about the lab meetings, they started joining. These meetings have now become a talk series on bilingualism, hosting 60-70 researchers each Monday morning via Zoom, sharing ideas about how to continue their language research through the pandemic.

“Everyone in the language science research community is hungry to be together and receive feedback on their research, so we’ve not only broken down geography but also generational barriers,” says Kroll. “It’s a silver lining that we have researchers at different career stages, from the undergraduate students to senior faculty, from universities all over the world, who are joining these weekly discussions online, and it creates an incredibly rich exchange and opportunity, especially for our UCI students. Even if they were in the lab in another country, they might not have had as much direct interaction with their mentors.”

The PIRE program has served as a career launch pad for scores of students over the years.

“PIRE has completely shaped who I am as an academic who wants to work with students who are at all different places in their own academic careers,” says Rossi, who earned her undergraduate degree in Italy, her Ph.D. in the Netherlands, and conducted postdoctoral research in the U.S. “For me, doing research in different environments internationally has been incredibly valuable, so if I can encourage students to have some sort of international research experience, I want to do that.”

Past PIRE fellow Megan Nakamura, who is herself a first generation college student, is now working in Rossi’s lab and mentoring UCI PIRE students this summer including, first generation student Cesar Rosales.

Rosales, a language science and psychology major, grew up speaking Spanish at home and English at school. He says he never thought about language scientifically until he took a linguistics class his first year at UCI. Now, he plans to attend graduate school, and believes his research experience in PIRE will help make that possible.

“The unique thing about telecommunicating is that people are generally more available, and it’s great being able to connect and receive mentorship from others through this process,” Rosales says.

Perez Bernal says the process has also helped her gain confidence and envision herself in graduate school.

“This experience has given me a chance to view what being a researcher is like, what being a grad student is like, and to understand that when something goes wrong, we’ll work to find a solution,” says Perez Bernal.

Although most of the students who participated in the PIRE program over the last decade have not gone on to become language scientists, almost all of them report that the experience had lasting impacts on their lives.

“These are truly transformative experiences for our students,” says Dussias, the PI at the Penn State site. “Every single student who has participated in PIRE has told us that at the time of finding a job, it was because of PIRE that the students were able to show they can be successful working in another environment, interacting with other people from other cultures.”

“I was sorry about not having the PIRE students coming to Granada this year, because we usually take them to fairs and festivals, so they manage to experience something of the culture and the science. When doing exchanges, it’s important to have both,” says Bajo. “Seeing how other people work in other places around the world, it really opens your mind and helps you learn to be flexible.”

So researchers put together special presentations about life in their cities, and hosted online movie viewing parties with group discussions. They even shared recipes from their home countries and scheduled a Zoom meeting where Europeans enjoyed a very late night snack, the Eastern U.S. had dinner, and the UCI students ate late afternoon dinner to try their hands at making Spanish tortilla and Dutch specialties like stamppot.

“This is perhaps a very small silver lining in the pandemic, but there has been wonderful enthusiasm and interaction across our PIRE network all over the world,” says Kroll. “We were of course longing to be able to pack our real bags, but whatever we could possibly do remotely this summer, we made it happen!”

-Christine Byrd for UCI Social Sciences
-pictured top to right: PIRE Fellow Katherine Tran, a UCI second year studying language science, is conducting research with faculty from University of Groningen and University of Florida this year. Researchers from UCI and the University of Granada, from undergraduate students to distinguished faculty, share and enjoy their food from around the world.