Unlocking mysteries of the bilingual mind 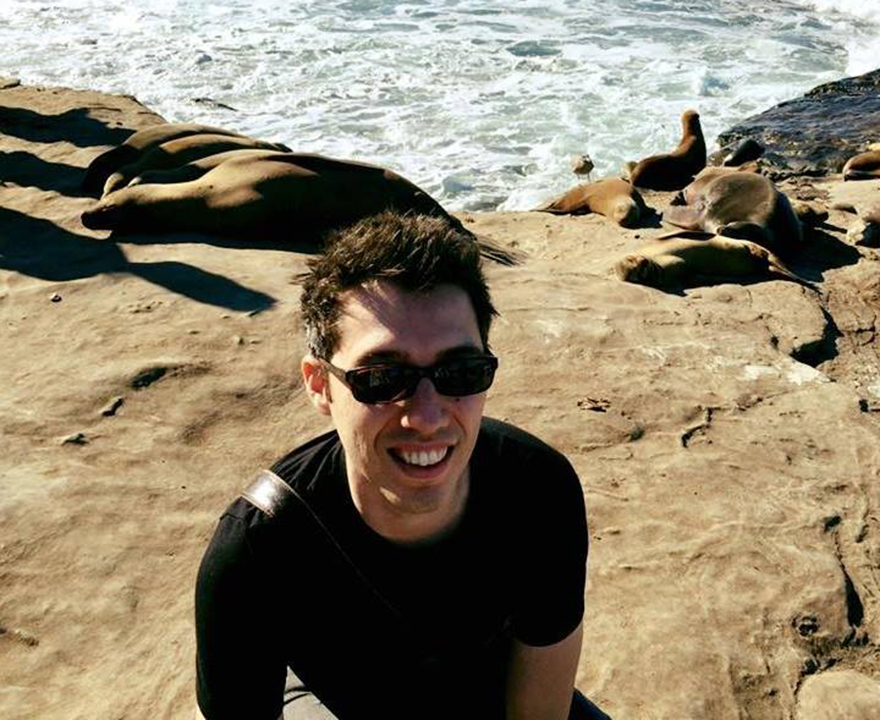 Unlocking mysteries of the bilingual mind


Christian Navarro-Torres grew up in Puerto Rico speaking Spanish yet immersed in English-language pop culture through movies and TV shows. During his first visit to the mainland U.S., around age five, he found himself surrounded by predominantly English speakers for the first time and, much to his own surprise, he was able to automatically reply to them in English.

Although shifting fluidly between languages occurs subconsciously for bilinguals, the cognitive processes that make it possible are complex and not well understood.

“Bilingualism actually changes the way you use your cognitive abilities to navigate your day-to-day life,” explains Navarro-Torres.

As a first-generation doctoral student in language science at UCI’s School of Social Sciences, Navarro-Torres’ research on bilingualism and the brain promises to shed light on the unseen cognitive functions that bilinguals utilize. Recently, his work has earned him two prestigious grants: a National Science Foundation Doctoral Dissertation Research award and a National Institutes of Health National Research Service Award.

“Christian’s life experience as a bilingual speaker brings him to the topic of his research with special insight,” says his advisor, Judith Kroll, Distinguished Professor of language science at UCI. “It is not only his experience growing up as a bilingual speaker of Spanish and English, but also as an individual who has lived in many different places and has navigated different linguistic and cultural environments. All of that experience informs his research.”

“It changed the course of my life”

Though his interest in cognitive and brain science began when he was an undergraduate student at the University of Puerto Rico, he opted to pursue a degree in philosophy, building a strong foundation in creative and critical thinking.

His first round of graduate school applications were rejected. But, undeterred, he stayed at the university working as an assistant in a lab to gain research experience. Then, a diversity supplement grant from NIH enabled him to go to the University of Connecticut as a research assistant for a longitudinal NIH study exploring language outcomes for autistic children.

“It changed the course of my life,” says Navarro-Torres. “That research experience gave me the opportunity to better understand the field, the relevant questions, and the kind of exciting research that was being done.”

This experience inspired him to pursue graduate school again, with a focus on linguistics and cognitive science. Although he once again faced rejection from most of the schools he applied to, his insightful questions during a panel interview caught the attention of one of the faculty members, Kroll. She invited him to come work as the laboratory manager in the Center for Language Science at the Pennsylvania State University, and then apply to Penn State again after a year.

So he did, earning his master’s in cognitive psychology and landing a prestigious NSF Graduate Research Fellowship to support his research. Twice during his time at Penn State, he won NSF Partnerships for International Research and Education (PIRE) grants to conduct psycholinguistic research in Germany.

In 2016, Kroll moved to California - first to UC Riverside and, ultimately, to UCI, where she helped launch the doctoral  program in the Department of Language Science in the School of Social Sciences. Navarro-Torres transferred his studies, as well.

“It would be exceptional to have experience in two doctoral programs, but to have moved into a third doctoral program is quite extraordinary,” notes Kroll. “Christian has done this with grace and openness to the new experiences that each move afforded. He has also gained experience in what it is like to arrive in a new program and set up a laboratory from scratch, something that he will face himself at some point in the near future.”

Among the many facets of bilingualism that interest Navarro-Torres, one is how the brain activates differently among various types of bilingual speakers - for example, heritage speakers such as Americans who grew up speaking Spanish at home but English in the outside world, or native Spanish speakers who acquired English as a second language for school or work, or those like him who grew up immersed in two languages in and out of the home.

When bilinguals attempt to speak a word, their brains automatically activate both languages at the same time. Researchers believe that bilinguals’ brains overcome this challenge by actively suppressing the irrelevant language. Though, again, exactly how this happens may depend on the bilingual person’s language experience and environment, according to one of his recent published papers in the Journal of Experimental Psychology: Learning, Memory, and Cognition.

“There’s parallel activation that bilinguals have to juggle, and we see unique activity in measures of brain response when they are trying to select one of the languages,” says Navarro-Torres. “The idea, roughly, is that bilinguals are engaging some brain regions to a greater extent than monolinguals, and that this has consequences for areas of the brain not specific to language.”

“I’m working on a paradigm that allows us to answer the question: What’s the relationship between the cognitive abilities and the language abilities in proficient bilinguals?” he adds.

Navarro-Torres’ NSF and NIH-funded dissertation research attempts to further untangle the complicated interconnection of cognitive abilities and language abilities that are unique to bilinguals. Specifically, he is interested in testing the language regulation hypothesis, which posits that bilinguals acquire the ability to regulate the activation of the native, or more dominant, language. According to Navarro-Torres, this regulatory ability engages a host of linguistic and non-linguistic abilities, and together they enable bilinguals to develop high proficiency in each of their languages.

Navarro-Torres originally planned to test bilinguals in a lab setting, both in Spain and here in Southern California, and have them complete a series of linguistic and cognitive tasks using electrophysiological (EEG) and eye-movement measures. However, those plans were impacted by the COVID-19 pandemic. Instead, Navarro-Torres will use online behavioral experiments to explore the same topics, at least until it’s possible to return to the laboratory.

Assisting in this online research will be UCI psychology major Dayra Perez Bernal, who also won an NSF PIRE grant — the same kind of grant he earned earlier in his academic career — to work on the project.

“Christian has been an outstanding mentor to others in the lab. He is generous with others, open to sharing expertise with them, but also eager to learn from them,” says Kroll. “In all, he is a talented young language scientist who is poised to make significant contributions to the science and to the quality of the community in which he lives and works.”

Navarro-Torres continues to be driven to pursue language science by the same questions that fascinated him when he first met Kroll. And with each new answer come more intriguing questions about language and the brain.

“Research constantly challenges current theories about our brain and language, linguistics and cognitive brain functioning. There’s something humbling about that,” says Navarro-Torres.  “Ultimately, I hope to be at the forefront of new discoveries, and throughout my career as a researcher, to inspire people to think about new ideas in creative ways.”