Finding herself - and a mission 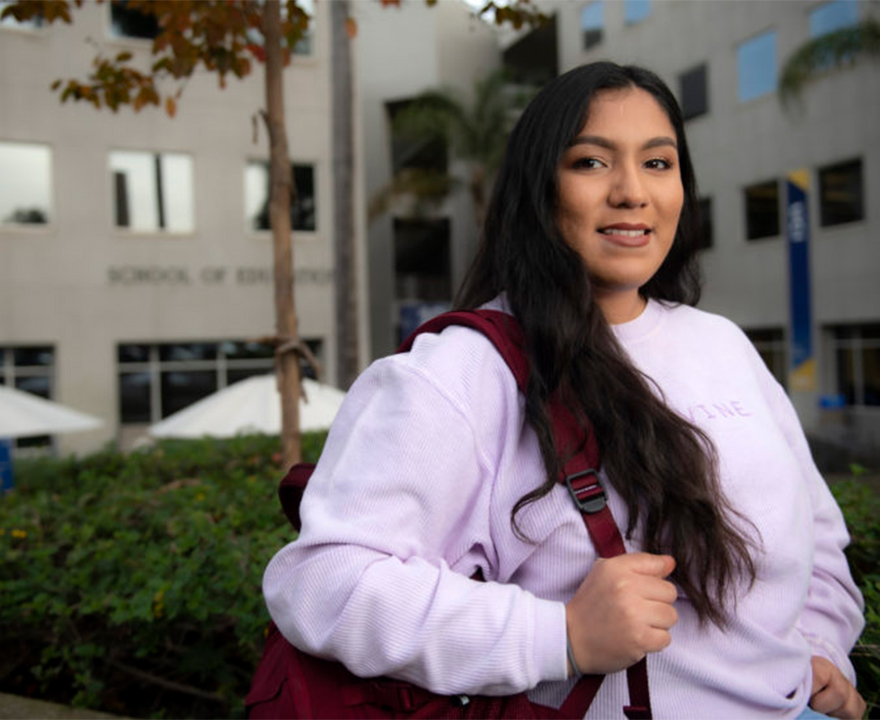 Finding herself - and a mission


Long Beach native Jocelyne Munoz was in a whole new ballgame the day she set foot on UCI’s campus. The first in her family to attend college, she discovered that university life was like nothing she had ever experienced. Immersion in such a learning environment would, eventually, transform her sense of self, goals for the future and worldview.

To adjust, Munoz reached out to campus clubs and organizations that helped foster a sense of community. She also took advantage of tutoring and mentorship opportunities to bridge academic gaps and improve her time management skills. Small class sizes enabled her to form strong relationships with her peers.

After college, she plans to get involved with nonprofit groups that prepare low-income and first-generation students for higher education. She hopes to eventually design curricula and supportive after-school programs for that demographic.

“Knowledge is a powerful tool that can be used to impact the future of society,” she says.

In line with her passion for educational accessibility, Munoz served as a board member for the UCI chapter of Movimiento Estudiantil Chicanx de Aztlan, an organization promoting Chicano unity and empowerment, a role in which she planned fundraisers and informative events.

“I learned more about my Mexican heritage and culture in MEChA de UCI,” she says. “If you’re interested in engaging in a lively discussion about the current political climate or simply the experience of being a Chicanx/Latinx student on campus, then you should stop by one of the club meetings.”

“Jocelyne is enthusiastic, professional and invested in contributing to the forging and sharing of productive spaces and dialogues,” Rosas says.

Munoz’s research – titled “Illuminating the Aspirations and Concerns of Latinx Residents, Neighbors and Laborers Across Southern California, 2018-2019” – was inspired by her interest in working with people in the Latino community seeking higher education. Her goal was to discover how certain programs and curricula could be shaped to better fit the needs of such students.

“Both my involvement in MEChA and my research contributed to my journey of unlearning the outdated and harmful views perpetuated by society,” Munoz says. “One topic that was introduced to me in a MEChA meeting was Mexican hegemony. It opened my eyes to the vast world of Latinx culture, which I used to consider only as my own. I now realize that it’s wrong to shame the validity of someone’s culture just because they’re not brown enough or don’t speak Spanish the ‘correct’ way.”

Her pursuit of higher education has been facilitated (twice) by the Mabel Wilson Richards Scholarship, which provides financial assistance to eligible women from the Greater Los Angeles area.

Munoz is one of many grateful UCI students to have benefited from philanthropic support. The awards partly cover university expenses and enable recipients to engage in activities outside the classroom – such as research or community service – that enrich their college experience and increase their success after graduating. UCI offers nearly 1,000 scholarships funded by generous donors, giving students more than $4 million in academic aid.

“These awards have allowed me to become a well-rounded individual who can speak from multiple perspectives,” Munoz says. “They’ve had a large impact on my life, given my background as a first-generation student. However, now that I’m a student at UCI, I’m able to share with my family the information I’m learning.”

She adds: “Each class I’ve taken at UCI has taught me something about the way the world works and how it’s changing. I’m constantly making connections among the various subjects I’m studying.”

In fact, Munoz has been inspired to seek a graduate degree and intends – after earning her bachelor’s degrees next year – to enroll in a master’s program in education, with an emphasis on social and cultural analysis.

“With a master’s degree, I would hope to forge relationships in the nonprofit sector,” she says. “There are various organizations geared toward decreasing the underrepresentation of Latinx folks in higher education. This is an issue that I’m passionate about.”

Publicly launched on Oct. 4, 2019, the Brilliant Future campaign aims to raise awareness and support for UCI. By engaging 75,000 alumni and garnering $2 billion in philanthropic investment, UCI seeks to reach new heights of excellence in student success, health and wellness, research and more. The School of Education and the School of Social Sciences play vital roles in the success of the campaign. Learn more by visiting https://brilliantfuture.uci.edu/school-of-education and https://brilliantfuture.uci.edu/uci-school-of-social-sciences.

-Christine Catlett, UCI
-pictured: “Knowledge is a powerful tool that can be used to impact the future of society,” says UCI junior Jocelyne Munoz, who hopes to help increase the number of Latinos pursuing higher education. Steve Zylius / UCI