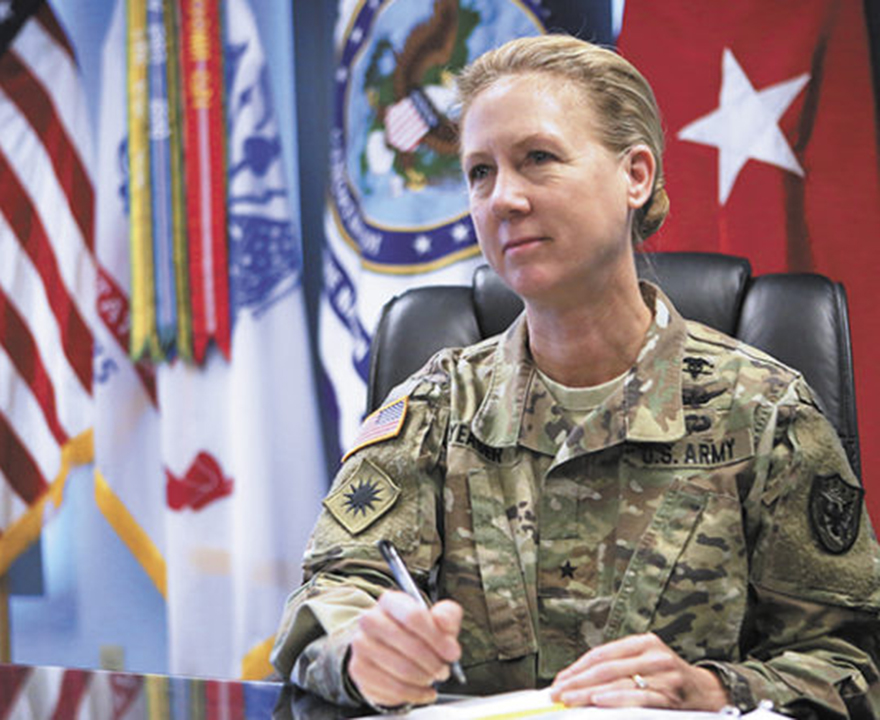 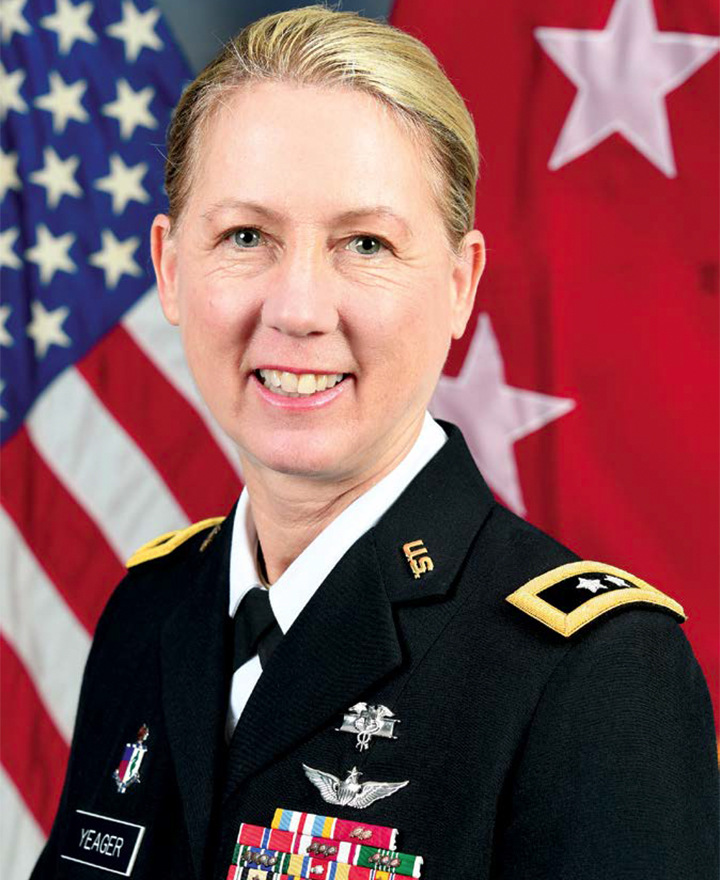 When Laura (Brandt) Yeager joined the U.S. Army Reserve Officers’ Training Corps during her freshman year at UCI in 1983, she viewed it as a means to an end, rather than an end in itself. The daughter of an Army helicopter pilot and Vietnam War veteran, Yeager had no intention of following her father’s footsteps into a military career; she simply needed money to pay her tuition – and the ROTC offers college scholarships in exchange for service after graduation. Since UCI didn’t yet have an ROTC program, she joined the one at nearby Cal State Long Beach.

“The more Army training I did, though, the more I found that I really liked it and I was good at it,” Yeager says. “So I thought, ‘Why not just do this for my job?’”

Her ascent through the ranks to major general over her 36-year Army career is proof that she’s not just good but exceptional. A helicopter pilot with more than 1,500 flight hours and a veteran commander with experience battling everything from forest fires to drug trafficking, Yeager has earned a raft of ribbons and medals for leadership. But her latest promotion caught the world’s attention, when she shattered the Army’s brass ceiling and became the first woman to head an Army infantry division.

At a ceremony this June in Los Alamitos, upon the formal passing of the regimental flags, Yeager, 55, took command of the California National Guard’s 40th Infantry Division, which has fought on fronts ranging from Kosovo to Korea and from France to the Philippines during its storied 102-year history.

“As I held the colors,” she says, “I was imagining how many hands they had passed through prior to getting to me and how important it is for me to live up to that legacy.”

While Yeager’s decision to join the military may not have been directly inspired by her father, retired California National Guard Maj. Gen. Robert Brandt, her approach since entering the Army certainly has been. “He instilled values that have made me successful not just on the career side but in managing all the different things you have going on in your life,” she says. Punctuality is a priority, Yeager learned, as is an unwavering work ethic. “There are many people smarter than me,” she says, “but I will outwork pretty much anybody.”

Likewise, Yeager has found her degree in psychology, which she earned at UCI in 1986, an advantage since her first command out of college, as a platoon leader.

“Someone told me, ‘A psychology degree is not very useful,’” she remembers. “I thought, ‘Wow, you really don’t understand what leadership is all about.’”

Yeager was accepted to helicopter flight school within her first two years of active duty, at a time when few women were earning their wings, let alone flying choppers. “I love the feeling when you pick up off the ground to a hover and the ability to maneuver in closely to the terrain,” she says. “It’s just magical.”

While in flight school at Fort Rucker, Alabama, she met her copilot for life, an Army officer named Curtis Yeager. Their first years of marriage were tough but typical for military spouses, with deployments keeping them apart for about four of their first eight years together. When the opportunity arose to transition out of active duty and into the Army National Guard reserves back home in California, Yeager seized it to spend more time with their growing family. “Our quality of life was so much better,” she says. Their four sons are all now grown; Scott, 24, is a specialist in the Army Reserve.

When her husband retired in 2005, Yeager resumed full-time active duty with the California National Guard, which responds to not only military emergencies but natural disasters.

For example, in 2008, Yeager coordinated the air response to severe wildfires in Northern California. “We were so overwhelmed with requests for helicopters that we had to reach out to other states,” she says. “My job was to find crews, get them out here, and get them everything they needed.” In all, crews from 14 states came to California’s aid.

In fall 2010, Yeager deployed to Iraq as assistant commander of the California National Guard’s 40th Combat Aviation Brigade. She battled blistering heat and blustering dust storms while flying seven- to eight-hour shifts in a UH-60 Black Hawk helicopter. “I loved it,” she says. “I was doing what I had been trained to do as part of a great organization that was doing its mission well. Our brigade had more than 260 aircraft in Iraq and flew over 100,000 hours, and we brought everyone home safely. That deployment is the highlight of my career.”

It was at this point, as a colonel, that Yeager started garnering attention for being among the few female officers in the room – if not the only one.

“People would say, ‘You’re the first female’ in this role or that role,” she says. “I didn’t really notice. To me, it was just my next job.”

Her next promotion – to commander of the 40th Combat Aviation Brigade – placed Yeager in treasured company: Her father once held the same position. “In the hallway at brigade headquarters in Fresno are pictures of previous commanders,” she says. “I love the fact that my dad’s picture is up there and then, so many pictures later, there’s mine.”

Yeager set an Army precedent in 2017, when she became the first female commander of Joint Task Force North at Fort Bliss, Texas. The task force draws on all branches of the military to provide support for federal law enforcement operations to prevent illicit drugs from entering the country. “It’s very important work,” Yeager says, “and with the opioid crisis, it’s needed now probably more than ever.”

Today, with her groundbreaking leadership of the 40th Infantry Division, she recognizes that she’s regarded as a role model not only for her own troops but also for the women already in the armed forces (they account for 16 percent of personnel) and those contemplating a military career. “I tell people, ‘It’s very simple. The Army tells you exactly what it needs you to do. You achieve that objective, and you’ll be successful,’” Yeager says. “It’s a great career that pays well and has fantastic benefits, and you get to work with the best people.”

She has reached out to younger females through presentations about STEM and military careers to Girl Scouts and Whirly-Girls, a nonprofit dedicated to advancing women in helicopter aviation. “Dads will bring their little girls up to me and say, ‘Look, honey, you could do this,’” Yeager says. “I love that [my position] is meaningful for them.”

Her new command involves keeping more than 10,000 troops – scattered among nine states and territories – equipped and prepared for deployment to places unknown.

“The world is in such a state of disarray right now, with so many threats out there,” Yeager says. “It’s important for me to continue to take this organization forward and, frankly, be ready for whatever comes down the pike.”