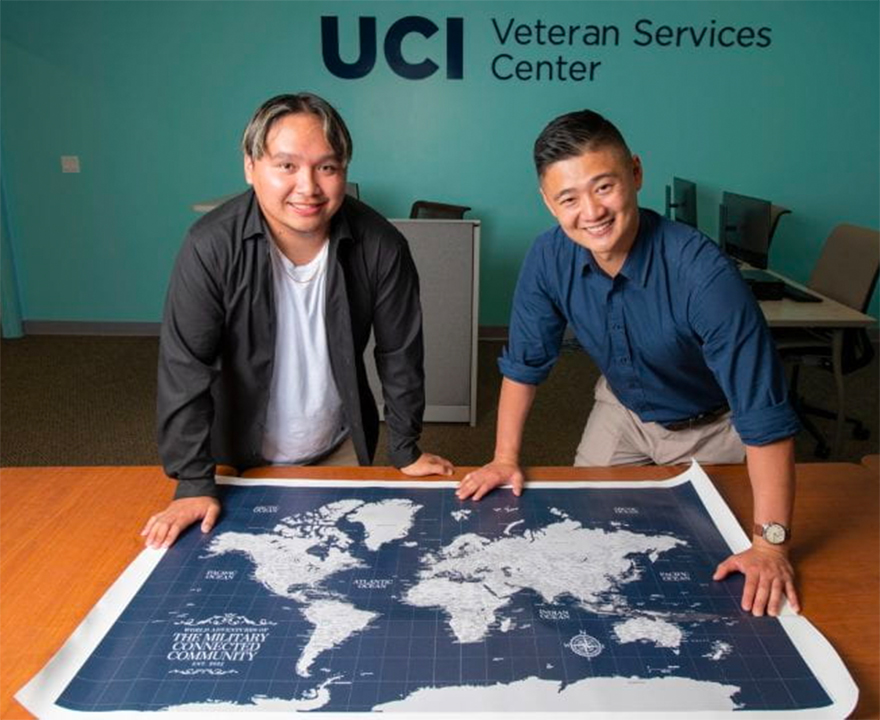 
A map adorns one wall of UCI’s Veteran Services Center. Visitors are invited to mark with colored pins where they grew up and where around the globe they’ve visited. The map is labeled in a corner: “The World Adventures of the Military Connected Community.”

Pins show where Anteater veterans or veteran parents of Anteater students have served, places such as Da Nang, Vietnam. But no matter how far away they’ve been, they have a home in this center.

The UCI Military Connected Community was recently created by several service-affiliated Anteaters as a way for students like themselves to connect with one another.

Third-year philosophy student Emmanuel “David” Sangalang Delacruz is president of the MCC. The son of U.S. Navy veteran Eduardo Delacruz – for whom he placed a pin in Da Nang – Delacruz was looking for a place on campus to find other military-affiliated Anteaters.

“I asked around if there was a club or organization for veterans on campus, and I was really surprised that there wasn’t one,” he says. “I’m not a veteran; I’m a dependent [of one]. But I still care deeply about that community, and I care deeply about other dependents as well. They have a story to tell too. It’s not just the story of their parents but also what it’s like to have parents that served.”

Delacruz decided to start the MCC to unite UCI’s military-affiliated community: veterans, dependents and active-duty service members, both undergraduate and graduate students. “I really wanted a space where all of us could get together for networking, advocacy and just having fun,” he says.

U.S. Army veteran Dani Molina directs the Veteran Services Center, the only university locale authorized to process Veterans Affairs education benefits on behalf of military-connected Anteaters. It works with other units across campus to support the transition and graduation of UCI’s military-connected students.

“We ensure that the students and professionals we serve accurately and swiftly receive their earned education benefits,” Molina says. “Equally important, our office will work closely with the Military Connected Community to celebrate and bring awareness of our student veterans, reservists, National Guard, active-duty and dependents.”

One of the MCC’s inaugural board members is secretary Raymond Lim ’14 business economics, who’s now seeking a master’s degree in professional accountancy at UCI’s Paul Merage School of Business. He served as a U.S. Air Force emergency technician in Japan.

His goal with the MCC is to help create a designated space for Anteaters that acknowledges their distinctive identity of being military-connected.

“It could be that your father or mother served in the armed forces or was a Department of Defense government service contractor or a full-time employee, and you had the opportunity to always be moving around a lot as a kid,” Lim says. “With that, you enter the world of a third-culture kid – someone with a multicultural background who lived around the world – and not being tied to one place becomes a heritage in itself.”

Born and raised in San Mateo County, he graduated from UCI in 2014 with a degree in business economics from the School of Social Sciences. After completing his master’s, Lim hopes to continue a career in accounting that he has begun through his current internship with Ernst & Young.

Delacruz is also a native Californian. Born and raised in Lakewood, he transferred to UCI from Long Beach City College at the beginning of this school year.

He’s proud of his family’s military service throughout generations. Delacruz’s father was a Navy lieutenant during the Vietnam War, and his brother, Chris, was recently sworn into the Air Force. When he graduates from UCI in 2024, Delacruz hopes to use his philosophy degree to join the Marines as a judge advocate general.

The MCC is registered as a chapter of Student Veterans of America, an organization dedicated to empowering veterans in higher education to thrive in life after service. As the official UCI chapter of the SVA, the MCC is able to provide SVA services and networks to Anteater veterans.

Molina says: “The MCC is the ‘voice’ of our student veterans and their families, and they are strong partners with the Veteran Services Center. We are delighted to know that MCC leadership is actively engaged with the VSC and moving with intensity and urgency to ensure that the students we serve are not overlooked or misunderstood. We look forward to supporting their efforts to enhance and improve the military-connected student experience at UCI.”

Such students will find a warm welcome at both the VSC and the MCC. “Here’s your pin,” Lim says. “Tell us where you’re from, and you’ll be one of us here too.”

-Dhanika Pineda, UCI
pictured: Emmanuel “David” Sangalang Delacruz (left) is a junior in philosophy and founder and president of UCI’s Military Connected Community. Here, he and Raymond Lim ’14 business economics, now a grad student in accounting and secretary of the MCC’s board, display the world map on which visitors to the campus’s Veteran Services Center are invited to pinpoint where they grew up and where they’ve been around the globe. Steve Zylius / UCI