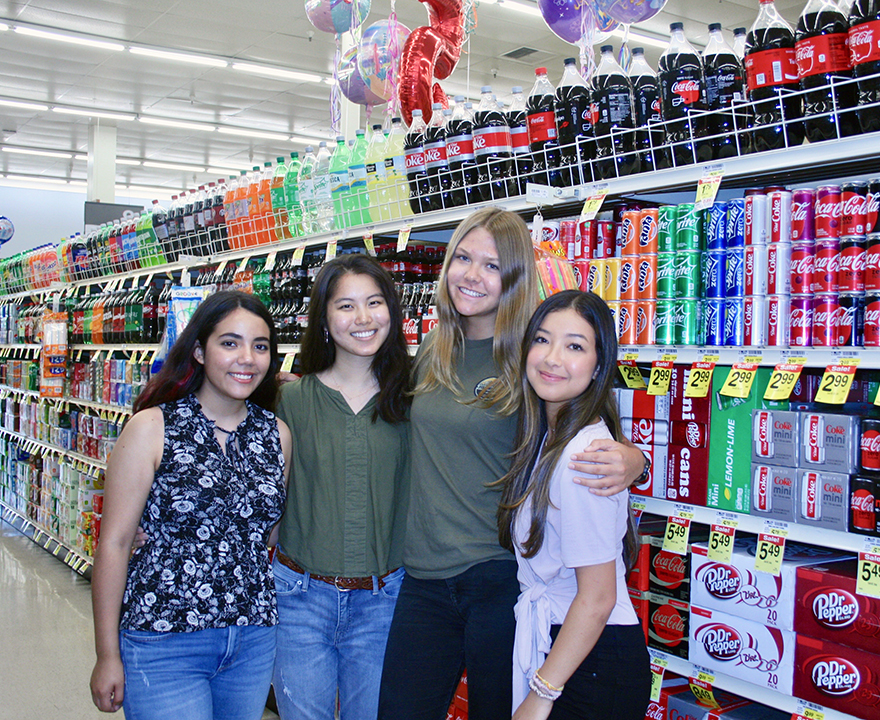 
When Berkeley, California enacted a soda tax in 2014, it wasn’t just sugary drinks that took a hit, but also grocery store bottom lines. Gross revenues in the city's grocery stores declined 9% the following year, according to new research from the University of California, Irvine’s Program in Corporate Welfare Studies, which explores how government regulations affect businesses.

The massive data analysis required to draw this conclusion was made possible thanks to a group of high school and college students who interned with the program this summer. They culled through millions of data points about grocery store sales in Berkeley.

“The students worked incredibly hard on original research, in teams rather than in isolation,” says economics professor Amihai Glazer, who directs the program, housed in the School of Social Sciences.

“Few universities in the country offer such a research internship, which instructs students in statistics, invites business leaders to address them, has students criticize their own work -- and, yes, at times gives them lunch or dinner,” he added.

The soda tax was one of five topics that student research teams explored this summer by analyzing large amounts of data. Other topics ranged from how the Flint water crisis affected stock prices of companies in Michigan, to what lessons of the 1928 bank audits can be applied to today’s financial system.

This marks the third annual summer economics internship in the Program in Corporate Welfare Studies. Twenty-one students from local high schools, UC Irvine, and other universities formed the intern cohort, spending 20 to 40 hours each week on campus conducting research with the guidance of UCI faculty or post doctoral researchers.

For many of the students, this summer internship was their most significant research experience to date, giving them a chance to learn the software commonly used in statistical analysis, how to clean and manipulate large data sets, and dive into open-ended research questions.

“I learned a lot about how to conduct research. This was a very intense crash course in statistics and how to apply statistical thinking to economic issues,” said Gurveer Singh, a second-year student at the University of Chicago whose team researched how the political ideology of CEOs affects behavior of their firms.

Natalia Ramirez, a second-year data science student at UC Berkeley who worked with the group studying the soda tax, agreed.

“This internship varied massively from the regular academic year,” says Ramirez. “I had more freedom to complete tasks the way I wanted to, which also meant taking initiative and struggling to find the most efficient way to do things. This ended up being a great way to develop my problem solving skills.”

Irvine High School senior Andrew Kim added, “This summer research program provided open ended questions that allowed me to answer them with my personal analysis and knowledge, and to conduct my own research without any restrictions.”

Kim was on a team that applied the math and statistics knowledge learned during the school year to analyze the economic effects of the Flint water crisis on companies in Michigan. The group found that Michigan firms that pollute the Flint River saw a $40 billion drop in their combined stock value in the seven days after a state of emergency was declared there in 2014. The students said they were surprised by the findings and realized that, at least in this case, the stock market gave companies a financial incentive to limit pollution.

Binish Rijal, postdoctoral fellow in economics in the Program in Corporate Welfare, guided the group in their research, but gave them wide leeway to pursue questions that interested them. He hopes to publish the findings as part of his ongoing work on government regulations, firm behavior, and environmental outcomes.

“It’s a pleasure to see the students pursuing interesting economics questions that they may never have thought of before,” said Glazer. He’s currently working on publishing a paper co-authored by one of the undergraduate students who participated in last summer’s research program. “This experience  prepares them for research in whatever field they decide to pursue -- whether it’s economics, computer science, or data analytics -- and to think critically about the real-life implications of policies like a soda tax or environmental protection of rivers.”

Beyond the research experience, students heard from guest speakers ranging from corporate executives to a director of graduate admissions in economics at UCI.

“Although working on real research was exciting, I personally really liked the workshops that were held for us,” says Lydia Ignatova, a student at Woodbridge High School in Irvine. “All the guest speakers’ advice was helpful and I enjoyed hearing about their personal experiences.”

Working together for dozens of hours each week, the students also became resources for one another -- with the seasoned students giving advice to first and second year undergraduates, and the college students sharing their wisdom with the high school students.

While most of the students have family in Southern California, they came from schools as far away as Middlebury College and the University of Pennsylvania, with majors as varied as computer science, economics, and French.

“Oftentimes, research can be a lonely job, but working in groups made this internship dynamic and enjoyable,” said Singh. “Everyone who I worked with challenged me professionally but also made the program more fun.”

The students will share their findings at a symposium on Friday, August 9, 9-11:30 a.m. at Social & Behavioral Sciences Gateway 1321, to which the community is invited.

“This group of students is very creative and hard working,” says post doctoral researcher and economics lecturer Lai Jiang, who mentored the group studying Berkeley’s soda tax. “I feel lucky to have the chance to work with them.”

-Christine Byrd for the UCI Program in Corporate Welfare Studies