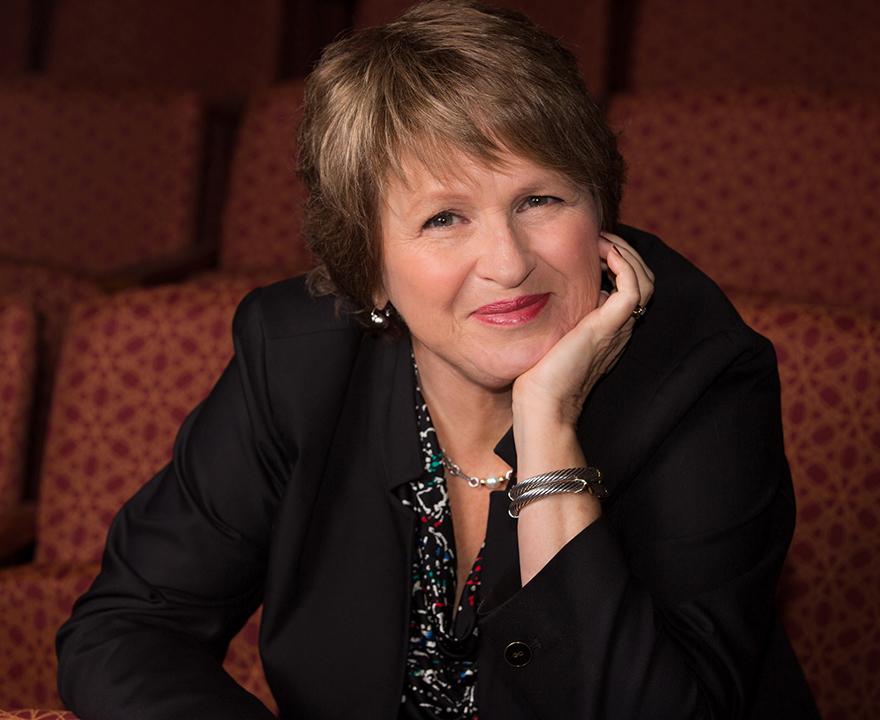 
The theatre has been a constant in alumna Paula Tomei’s life. Growing up, she was immersed in dance, music, and art classes. She remembers seeing her first play when she was in eighth grade (incidentally, at South Coast Repertory where she would spend her career). In high school, she “caught the theatre bug” and loved the responsibility she and her classmates were given to run school productions—selling tickets, advertising, building sets, and making costumes. As an undergraduate at UC Irvine, she enjoyed taking classes in theatre and dance and while there was a brief period when she thought she was going to be a dentist (an organic chemistry class changed her mind), the appeal of a life in theatre pulled her back.

“If you really want to enjoy life and not feel like you’re punching a clock, pursue something you’re passionate about. Pursue something that feeds your soul. If you stick with it, the chances are you’ll be a success. The need to do that will shine through,” she says.

Today, Tomei is the managing director of the Tony Award-winning South Coast Repertory (SCR) in Costa Mesa, where she’s in charge of the business aspects of the theatre.

There is a lot which makes her job unique. For one, “It’s like running a new startup every six to eight weeks,” she says. Unlike other theatres that book touring productions, SCR creates shows from scratch. After choosing the play, SCR decides who should direct, which actors to cast, and then builds the sets and costumes on site.

“I love the fact that we work with living playwrights and develop new work,” she says. SCR has three to four plays in production at any given time (two on stage and another one to two in rehearsal). “Very few theatres in the country produce the amount of shows that we do in a season,” she says.

A life in service

Tomei is the 2019 recipient of the Lauds & Laurels Distinguished Alumni Award for the School of Social Sciences. The award recognizes an alumnus who has achieved professional prominence in their field and who has made significant contributions to UC Irvine and the community.

Tomei’s history of service is extensive. It covers the top non-profit organizations in her field and in the county.

“You get more than you give back. I’ve always found that to be true,” she says. Tomei assessed both state and national theatres as part of her role as a site visitor for the National Endowment for the Arts and the California Arts Council. Reflecting on that experience, she says, “The more remote, the more surprising in my experience. It’s astonishing to see what’s happening at these theatres. Often times they’re the only theatre within hundreds of miles. I only wish more people could experience visiting others first hand and see how life changing these theatre productions can be, no matter where they’re located.”

Tomei’s service also extends to UCI, where she serves on the Illuminations Council for Arts & Culture Initiative and on the Dean's Leadership Society Executive Committee for the School of Social Sciences.

“I’m so proud of UCI and of the fact that I’m an Anteater. Irvine opened doors for me. It’s so important to me to continue to support it,” she says.

A life in the theatre

After graduating from UCI with a degree in economics (she liked that she could pursue her interest in business, while taking theater and dance classes on the side), Tomei took a road trip with a friend and ended up in Ashland, Oregon. She had traveled there many times before in high school to see theatre. While in Ashland, a friend told her about a job at SCR. Unfortunately, the position had been filled by the time she returned. So despite her parents’ concern that she wasn’t putting her economics degree to use, Tomei called SCR’s office to inquire about job openings week after week for about two months. Her persistence paid off because when a position did open up, she was called in for an interview and hired on the spot. “After the interview, I was told to go to lunch and come back. I’ve been there ever since,” she says.

Tomei has been at SCR for forty years and her career rose in tandem with the theatre. As SCR thrived, Tomei thrived with it. “I started out processing subscription orders. I loved talking to people, getting the word out about SCR. It was fun!” she says. “I learned everything from the ground up from smart people who took me under their wing.”

Ultimately, the people are what have kept Tomei at SCR for so many years. “It’s a privilege to support artists and provide art for a community that appreciates it. It’s easy to be passionate. Plus, there’s nothing typical about each day, which is part of the attraction. It keeps me on my toes! I wouldn’t change a thing.” She pauses. “Okay, maybe I’d change that I was ten years younger, but still knew what I know now,” she says laughing.