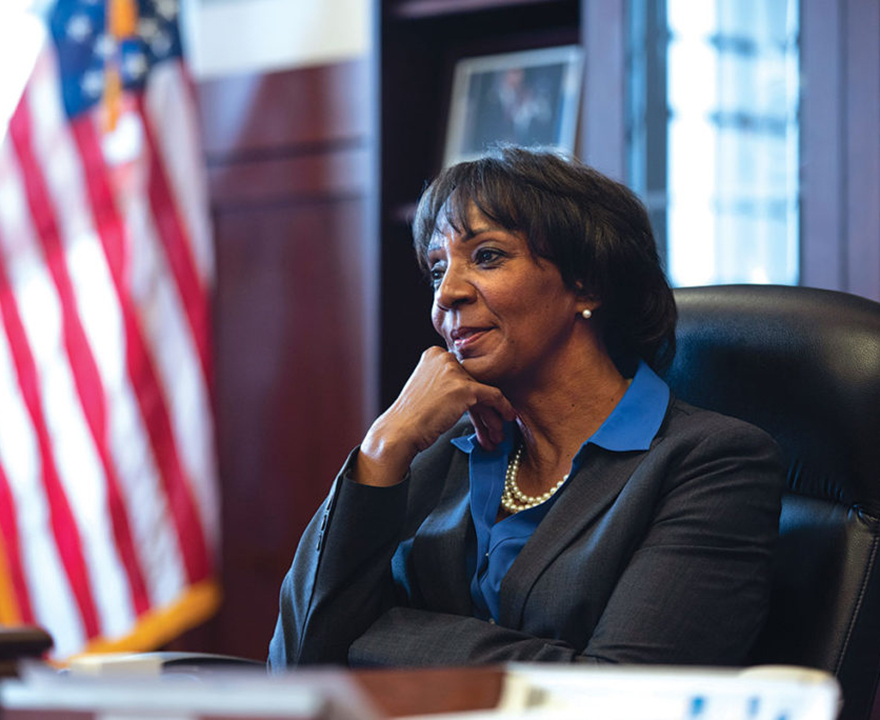 
The most satisfying case so far in Jackie Lacey’s career was prosecuting Milton Walker Jr.’s killers. It was 1999, the UCI alumna was a deputy district attorney for Los Angeles County, and the murder was the first tried as a hate crime in California.

“Milton was a homeless, 40-year-old addict, and these skinheads were looking for an African American to kill so they could earn the right to get a lightning bolt tattoo conferred by their gang,” Lacey recalls, sitting behind the desk where she has served since 2012 as the 42nd L.A. district attorney. “I wanted to get justice for Milton. Usually in these cases, family and friends call about progress on the case. Nobody called about Milton.”

If not for an “introduction to the study of law” course at UCI, however, Lacey may not have become an attorney. Her journey to campus, her subsequent USC law degree, and her leadership of 1,000 lawyers, 300 investigators and 800 support staff have been fueled by family, faith and hard work.

“My parents came here from the South in the 1950s to escape discrimination,” she says. “They had no opportunity to go to college, but they believed that, for me, education was the path to a good job and an enhanced life. I remember my father accompanied me in touring UCI. A group of students of color – Thomas, Gerald and William Parham – were on the welcoming committee. They had us at hello.” (Thomas Parham would become UCI’s vice chancellor for student affairs.)

Lacey majored in psychology and planned to become a teacher. Then, in her junior year, she heard a law lecture by African American attorney Irma Brown (now a juvenile court judge), and she was hooked.

“I loved how she talked to the class, and I thought if I could get a message across like that, I’d be happy,”
Lacey says.

Today, as D.A., her message is the clear pursuit of justice. Under her leadership, prosecutors are educated in the scientific and medical aspects of child abuse, such as shaken baby syndrome, and how to communicate them to judges and juries. An award-winning “Blueprint for Change” report that she initiated spurred the training of law enforcement personnel to de-escalate encounters with mentally ill individuals and divert them from jail. She also created the Conviction Review Unit to reopen cases under the guidance of experienced detectives and seasoned prosecutors – if warranted. It has revisited 1,300 cases and freed two men from life sentences.

“There was some resistance within the department to this at first,” Lacey says, “but I encourage resistance. It’s my job – and part of my mission – to convince them it’s the right thing to do.”

She has also faced resistance from critics decrying decisions not to prosecute officers involved in shootings. She survived a recall attempt in 2017 after running unopposed for her second term a year earlier.

“I listen and try hard to understand and respect the point of view of groups like Black Lives Matter,” Lacey says, “but I was elected as D.A. to serve the whole community and to follow the law; it’s illegal to decide a case based on anything else. And the law allows police to use deadly force if they believe their lives are in danger.”

That said, she adds: “I deal with 48 different police agencies, and the number of people who die at the hands of police needs to be looked at.”

Lacey – who keeps a plaque on her office bookshelf that reads “Faith makes things possible, not easy” – says she has seen too many times what happens when young adults don’t have the family, faith or educational opportunities she has enjoyed. She met her husband, David, at church when she was 17, and they have a grown son and daughter.

Her advice to her children and other young people: “First, find the right mate. Then find an occupation you love. Success comes to people who work really hard, and if you’re going to put in long hours and blood, sweat and tears, it should be something that taps into your passion.”

The phone rings, and Lacey leaves her desk to take her mother’s call. Back in her high-backed leather chair, she says: “My mom was the oldest of 14 kids and couldn’t go to college. She raised a daughter who is the D.A. of the largest office in the nation. I take that seriously.

“We need more people from diverse backgrounds. It’s not about me; it’s about parents, teachers, friends, supporters. Someday I’d like people to say, ‘She was a good D.A. She protected the rights of the community.’”