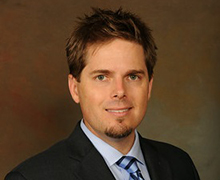 
Scott Barkowski, economics ’14, has been awarded the 2017 Georgescu-Roegen Prize by the Southern Economic Association.

The accolade is granted annually for the best academic article published in the Southern Economic Journal that year as determined by a selection committee. For Barkowski, that article examined the effect of physician regulations on health care spending. The paper was originally written as his third-year research paper from his time as a graduate student at UCI.

The award includes a cash prize of $500. Burkowski will be recognized at the Southern Economic Association Conference in Tampa, FL on Nov. 18, 2017.

After receiving his Ph.D. from UCI in 2014, Barkowski accepted a position as an assistant professor of economics at Clemson University in South Carolina where he is also a faculty scholar in the School of Health Research. His research interests include health economics, labor economics, and industrial organization.