Would extraterrestrials be able to communicate with humans via images? 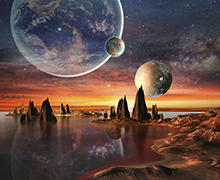 Would extraterrestrials be able to communicate with humans via images?


In the October issue of the American Psychological Association Monitor on Psychology, cognitive sciences professor Donald Hoffman explains that communicating with extraterrestrials via images may be tough, should we happen to encounter an opportunity to interact.

Laypeople and scientists who don't study vision tend to think that human vision works like a camera, passively recording scenes. But years of research shows that instead the human brain actively constructs what we see from the ambiguous visual data our eyes take in, using rules that have developed over hundreds of thousands of years of evolution. And there's no reason to think that extraterrestrials would have evolved the same rules that we did, or would be able to interpret or even "see" our images the way we intended — especially given that even different species on earth have evolved such different perceptual systems.

"The actual [visual] content that we try to communicate [to extraterrestrials] I would say is almost surely not going to be received in the way we intended it," Hoffman says. "We don't even understand the perceptual world of an ant, and we've been living with them a long time."

Read on, courtesy of the American Psychological Association.