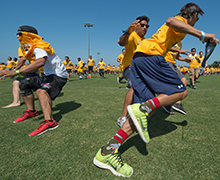 
Thousands of University of California, Irvine students converged on the Anteater Recreation Center athletic fields Tuesday to usher in the 2015-16 academic year with a record-setting game of capture the flag.

Guinness World Records adjudicator Michael Empric observed UCI’s effort to stage the world’s largest game of capture the flag from start to finish and declared the record to have been set by 2,888 participants.

One of many Welcome Week activities, the world-record attempt has become a UCI tradition, with previous triumphs for the largest dodgeball game, pillow fight and water blaster shootout.

Sociology major Cheston Nguyen was on the field with his Pi Kappa Alpha brothers, handing water to overheated players and introducing new students to his fraternity.

“I’ve come out to this event every single year since I was a freshman. I participated in the dodgeball, pillow fight and water gun events,” he said. “So I guess that means I have four Guinness world records under my belt.”