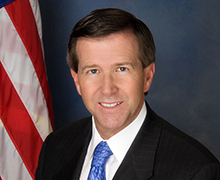 
Former U.S. Rep. John B.T. Campbell III has been appointed the 2015-16 Dean’s Visiting Professor in the School of Social Sciences at the University of California, Irvine. Previously held by former California Assemblyman Jose Solorio, the position involves teaching two undergraduate courses: The U.S. Congress and The American Legislator, the latter of which is a new class Campbell is developing for the spring quarter.

“The School of Social Sciences is all about marrying basic research with public impact,” said social sciences dean Bill Maurer. “And having that impact requires a deep understanding of the political process. We’re thrilled that Rep. Campbell has agreed to share his expertise on American politics as a visiting professor.”

Before serving in Congress from 2005 to earlier this year, Campbell was a California state senator from 2004 to 2005 and a California assemblyman from 2000 to 2004. In addition to teaching at UCI, he’ll make public presentations on campus and help the Department of Political Science and the Center for the Study of Democracy coordinate visits from distinguished guests.

“Rep. Campbell will bring the real world of state and national politics into our classrooms,” said Louis DeSipio, interim chair of political science. “Our students will learn how law is made from an experienced state and national legislator who can share practical examples from Sacramento and Washington. Rep. Campbell’s experiences will undoubtedly enrich our curriculum and help shape the career goals of some of our students.”

Campbell has a bachelor’s degree in economics from UCLA, earned a master’s in business taxation at the University of Southern California, and is a certified public accountant. Prior to his election to the California State Assembly, he spent 25 years in the retail automotive industry.