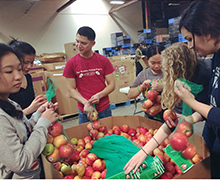 
Many UCI students choose to dedicate their free time to community and non-profit organizations, simply because they want to make a difference. It’s an honorable trait that community-minded anteaters share, and now with the revamped social policy and public service major, they are learning how to turn that desire to serve into a career.

At the heart of the program is a 300-hour community service requirement. Coupled with the major’s math and statistics focus, students get first-hand experience with real-world tools that will serve them in their future careers.

“To their benefit, students come out with both quantitative and qualitative training,” says Jeanett Castellanos, social sciences lecturer and program administrator. “For me, it’s really important that they go into the workforce or grad school with those analytical skills.”

Associate professor Caesar Sereseres helped pave the program’s pathway nearly 20 years ago with the public and community service major which had a heavy community service emphasis. The updated curriculum, which launched in fall 2011, partners that desire to serve the public with current marketable skills and a set of new policy related courses. And it’s become especially popular with double majors, who wish to supplement their learning with the experiences offered by SPPS.

The program boasts 84 enrolled students, up from 53 last spring. Castellanos attributes the positive response to the major’s shift in focus that came with the new moniker, which offers students a clearer trajectory for their future education and career.

Daniel Cano, an SPPS and psychology and social behavior double major, had always been drawn to public service, having worked with organizations such as the Second Harvest Food Bank of Orange County (pictured above). But it wasn’t until midway through his second year that he discovered he could tie service into his education. He will be entering his senior year this fall and agrees that the practicality of the major was a big draw for him.

“A lot of majors can be heavily theoretical, but this one also helps bring that practical element into it, which is great,” he says. “The GIS (geographic information systems) course taught by Dr. Christopherson taught me how to gather census data and map it out. It’s a practical skill that companies seek.”

Another class that provides hands on training is Castellanos’ field study series, a core part of the curriculum that takes place over three quarters. It’s also where students get a bulk of their community service done, requiring a minimum of 160 hours with most students completing closer to 200. Over the course of two quarters, students volunteer and conduct research at an organization of their choosing, analyze their findings and compose a final research paper.

To help them choose where they want to volunteer, Castellanos brings in representatives from various groups during the fall quarter to give students an opportunity to ask questions and find which best fits their interests.

For Cano, a first generation college student with an interest in education, the Save Our Youth (SOY) Center in Costa Mesa was a perfect fit. He was drawn to the thought of mentoring youth and helping them take advantage of educational opportunities, but it was the center’s creative arts program that really spoke to him.

“In high school, I would produce music,” he says. “That was one of my hobbies. And, I never showcased that to the world. I just kept it to myself, instead of a diary. So for me to be able to tutor and instruct but also teach them about music composition or writing songs or poems—it let me put two passions together.”

Cano was able to channel that passion into his research paper for the class, in which he used his experiences with the students at SOY Center to explain Latina/o youth attitudes toward education. In fact, that same paper earned him the SPPS Research Award this year, a new award that recognizes a student in the major for outstanding original research that addresses a social issue within education, health or governance.

Castellanos believes that Cano’s work as a mentor and his ability to tie that into his studies demonstrates the freedom SPPS students are granted. She also finds that the option to study a personally meaningful topic facilitates a better educational environment.

“It’s empowering,” she says. “To create great scholars you have to facilitate for the connection between creativity, passion, desire, drive, and personal interest. And a lot of times, we prune that when we try to put things in a box.”

She also finds that the opportunity for creativity coupled with the new direction of the major has attracted more focused students. “We have students who see a problem and they want to make a change and they want to contribute—and that’s amazing in itself,” she says. “And I would say that the change we had in social policy really helped. In the PCS major, we had a lot of top students who wanted to help the community, but these brilliant thinkers—I see a lot more now. When you have a major that has a lot more focus, people who land in the major tend to have more intentional efforts toward their education.”

These brilliant thinkers also tend to seek out additional learning opportunities, leading to the founding of Social Policy and Public Service Advocates—an on campus club co-founded by Cano and Patricia Morales. The group holds weekly meetings on topics such as protest culture, resume building, public speaking and more, and encourages all students—both in and out of the SPPS major—to join.

Cano says that it has been exciting watching the group grow since he first explored the idea last year with Castellanos, who serves as the organization’s faculty adviser. This winter the group even began mentoring interns, teaching them the ins and outs of running a campus organization and developing their leadership skills.

In addition to SPPSA, Castellanos says that the Social Science Honors Program is seeing more members join from SPPS, as it gives the students an opportunity to continue their field study research once they complete the course.

“It’s a great opportunity,” she says of the honors program. “It’s a whole year of more academic training where students do their own research, and a large majority of those students will go on to grad school.”

But whether this new batch of SPPS majors goes on to graduate school or straight into the workforce, it is Castellanos’ and the rest of the faculty’s goal that they do so as prepared as they can be.

“We always will have a need for public service, and we will always have a need to have a curriculum in place to have people be socially conscious,” Castellanos says. “These students are here because they legitimately want to serve and make a difference in the world.”

And for these anteaters, learning how to change the world is all in a day’s work.