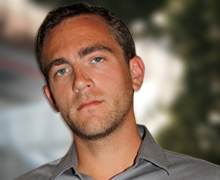 
Bennett Holman, a graduate student finishing his final year in the Department of Logic and Philosophy of Science, was recently named the winner of the Order of Merit Kathy Alberti Award, presented each year to a grad student in the School of Social Sciences who demonstrates tremendous promise as a future professor or teacher. In fact, Holman has already lived up to this promise, having recently accepted a tenure track position at Korea’s elite Yonsei University that will begin in September of this year. The small class sizes and light teaching load at Yonsei will allow him to devote himself to his students as well as maintain an active research agenda.

It’s a position that fits Holman well, as the Michigan native has excelled in both these areas since arriving at UCI. In addition to dedicating time to his own research—which addresses the role that money plays in medical research and how the scientific world blends its quest for the truth with its quest for profit—Holman has shown a knack for educating.

The faculty members who nominated him for the Alberti award, LPS professor and chair Kyle Stanford and assistant professor Cailin O’Connor, note the care he takes to get to know his students, even holding extended office hours and extra classes for those who need them. They also recognize his efforts in improving upon existing course curriculums, developing his own class—the  popular “Mind, Brain and Mental Illness” course—and the work he did to modify the LPS HIST 60 course for UCI’s Summer Bridge program.

During his time as a UCI student, Holman has traveled the world to present at conferences and workshops, published two works in Philosophy of Science, and earned multiple university awards including the Charles A. Lave paper prize for the creative use of empirical data and the Dean’s Dissertation Fellowship.

Holman will be recognized for his award at the Order of Merit awards ceremony June 12.