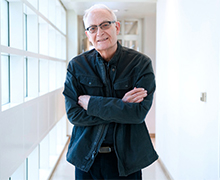 
Jean-Claude Falmagne is a mathematical psychologist. In the early 80’s, he joined forces with Jean-Paul Doignon, a mathematician from the University of Brussels, and began development of the mathematical theory underlying what would later become the internet-based educational software ALEKS (an acronym for Assessment and LEarning in Knowledge Spaces). This foundational work took them a decade to master, and in 1992, with the help of a large NSF grant to Falmagne at UCI, the software development began. The most important component of ALEKS is an extremely accurate assessment mechanism, which is capable of uncovering precisely what a student knows about a given scholarly topic, and most importantly, exactly what the student is ready to learn. This allows for the implementation, for each topic, of an efficient teaching program closely linked to the assessment. Today, scholarly topics covered by ALEKS include all of mathematics up to and including pre-calculus, and chemistry.

A large number of students have used ALEKS in universities, community colleges, and K-12 school districts. Many homeschooled students have also benefitted from the system. The result has been a substantial improvement of student grades, and also, when ALEKS is used as a part of a preparation to colleges and universities, a substantially more accurate placement of the students. The program is an integral part of UCI’s classroom and online algebra and pre-calculus courses. The online versions have reached more than 1,000 students through UCI's summer session alone.

“We live in a time when many faculty members and the university at large are thinking about the commercialization of academic research,” says Bill Maurer, social sciences dean. “Falmagne was a pioneer, bringing ideas to market early, and, importantly, not doing so in the name of individual gain, but for social betterment.”

By spring 2013, ALEKS surpassed the one-million student user mark and with a newly launched mobile version available for iPads and tablets, numbers were only expected to grow. Digital learning giant McGraw-Hill Education had been taking note, and by the end of summer that year, it acquired the company Falmagne, with his graduate students, had built from the ground up.

In a show of generosity that matched his impact-driven work with ALEKS, Falmagne, now a research professor in cognitive sciences at UCI, donated $3 million from the sale of his company to create three new endowed chairs in mathematical psychology, in the School of Social Sciences’ Department of Cognitive Sciences. His gift was done in honor of the late R. Duncan Luce, UCI cognitive sciences Distinguished Professor and pioneering mathematical psychologist with whom Falmagne served on the faculty for more than 20 years.

For his work, Falmagne will receive the UC Irvine Alumni Association’s highest honor, the Lauds & Laurels Extraordinarius award, at the 45th annual gala May 14.