What color is the dress? 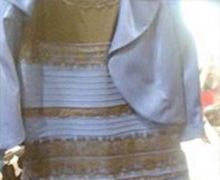 What color is the dress?


It’s all about the dress. For the past 24 hours, you’d be hard pressed to find a topic that has more people at odds than the color combo of a seemingly simple little number that surfaced on social media. Is it brown and white? Is it blue and black? How can so many people see the same photo and come up with such adamantly different results? To help solve the mystery, two UCI experts on visual perception and recognition are weighing in. I love visual illusions! My lab's motto is 'perception is more than what meets the eye.'

Color vision is much more complicated than people often realize. Color vision starts in the eye with the three types of cone photoreceptors. These cones respond to peak wavelengths of red, green, and blue light. However, these cones don't just send signals of a specific color hue straight to our conscious brain. Instead, they are wired up into what we call an 'opponent color' system. Information about red and green hues enter the visual system as red vs. green while blue enters as blue vs. yellow (red + green). This means that red cones and green cones may activate or inhibit the same neuron at the next level of retinal wiring, respectively. For blue vs. yellow, the red and green cones combine signals and then interact with the blue cone signals.

In our lab, we are using functional MRI to study where in the brain color information is processed. Science is still trying to figure out where in the brain these signals change from these comparisons of colors (red vs. green; blue vs. yellow) to our conscious interpretation of specific colors. So far, no one has shown a 'purple neuron,' for example. However, several types of color illusions can demonstrate how constructive the brain can be for vision. For example, we all experience something called 'color constancy.'  Because it is very beneficial for our survival to be able to identify objects with specific colors as the same despite changes in ambient lighting, we have evolved the ability to interpret the colors in a scene based not only on the specific wavelengths of light reflecting off a particular spot on an object, but also incorporate information like the neighboring colors and background lighting. Our brain can interpret a range of initial wavelengths as different colors based on the rest of the scene. One illusion that demonstrates how our brain adjusts our color interpretation of an object based on the surroundings and the lighting of the scene is shown in this video: https://www.youtube.com/watch?v=hvgOOKBvyQU.

Differences in color vision can arise between people, and even between your own eyeballs! Differences in the number and patterns of the three cone colors can differ between your own eyeballs, and definitely differ between people. You can imagine that if one person has mostly green cones and one has mostly red cones, differences in how the initial color signals are processed may arise. A small number of women actually have four types of cones, due to a mutation in one cone gene that makes three cones span the red and green wavelengths rather than two. These 'tetrachromats' are able to define more color hues than the rest of us with normal 'trichromatic' vision. Past the early stages of color differences, people may have different amounts of their brains devoted to processing color. Differences can also arise based on our experiences with color. Younger children tend to have a harder time seeing some of the color illusions. Even higher cognitive tasks like the language we learn as a child to describe colors, and how these languages divide up different hues, can affect our interpretation of a specific color!

In terms of the dress picture, many of these types of differences can be coming into play. The colors of the dress and the shading effects appear to fall within a specific set of hues that may be affected by the cone patterns in each eyeball and also by changes in the type of illumination in the room in which you are viewing the image. I suggest checking out the dress with each eye, in sunlight, in the dark, and under fluorescent lights. Zooming in to close up views of each color of the dress may also change the image for some, as the color information of the surrounding image is taken away. Remember, your eye is not simply like a camera - your individual brain is crucial in creating your actual perception!

I saw the dress as blue/dark brown initially, but was able to see white/gold under different lighting. In short, vision is a process of sophisticated construction. More details and visual examples can be found in my book Visual Intelligence: How We Create What We See, published by W.W. Norton.