Rosenstock and Feintzeig invited to speak in Munich, Germany 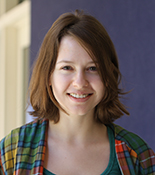 Rosenstock and Feintzeig invited to speak in Munich, Germany


Sarita Rosenstock (pictured) and Ben Feintzeig, third and fourth year LPS graduate students, respectively, have been invited to speak at the Irvine-Munich Workshop on the Foundations of Classical and Quantum Field Theories. The workshop will be hosted by the Munich Center for Mathematical Philosophy on December 14. Rosenstock will present a paper called "On Holonomy and Fiber Bundle Interpretations of Yang-Mills Theory,” which describes her recent work on the relationship between the two most widely discussed interpretations of an important class of physical theories known as Yang-Mills theory. Feintzeig's paper, entitled "Unitary Inequivalence in Classical Systems and the Interpretation of Quantum Theories," shows that a major problem in the foundations of quantum field theory also arises in some contexts in classical theories.