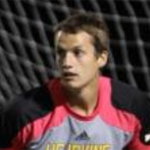 UC Irvine men’s soccer goalkeeper Andrew Fontein is one of 10 national finalists for the 2011 Lowe’s Senior CLASS Award. An acronym for Celebrating Loyalty and Achievement for Staying in School, the honor recognizes student-athletes who use their platform in athletics to make a positive impact in their communities.

Fans may cast their votes daily through November 14 at www.seniorCLASSaward.com. Fan votes will be tallied with those from coaches and media to determine the 2011 award recipient. The winner will be announced at the Men’s College Cup which takes place December 9 and 11 in Hoover, Ala.