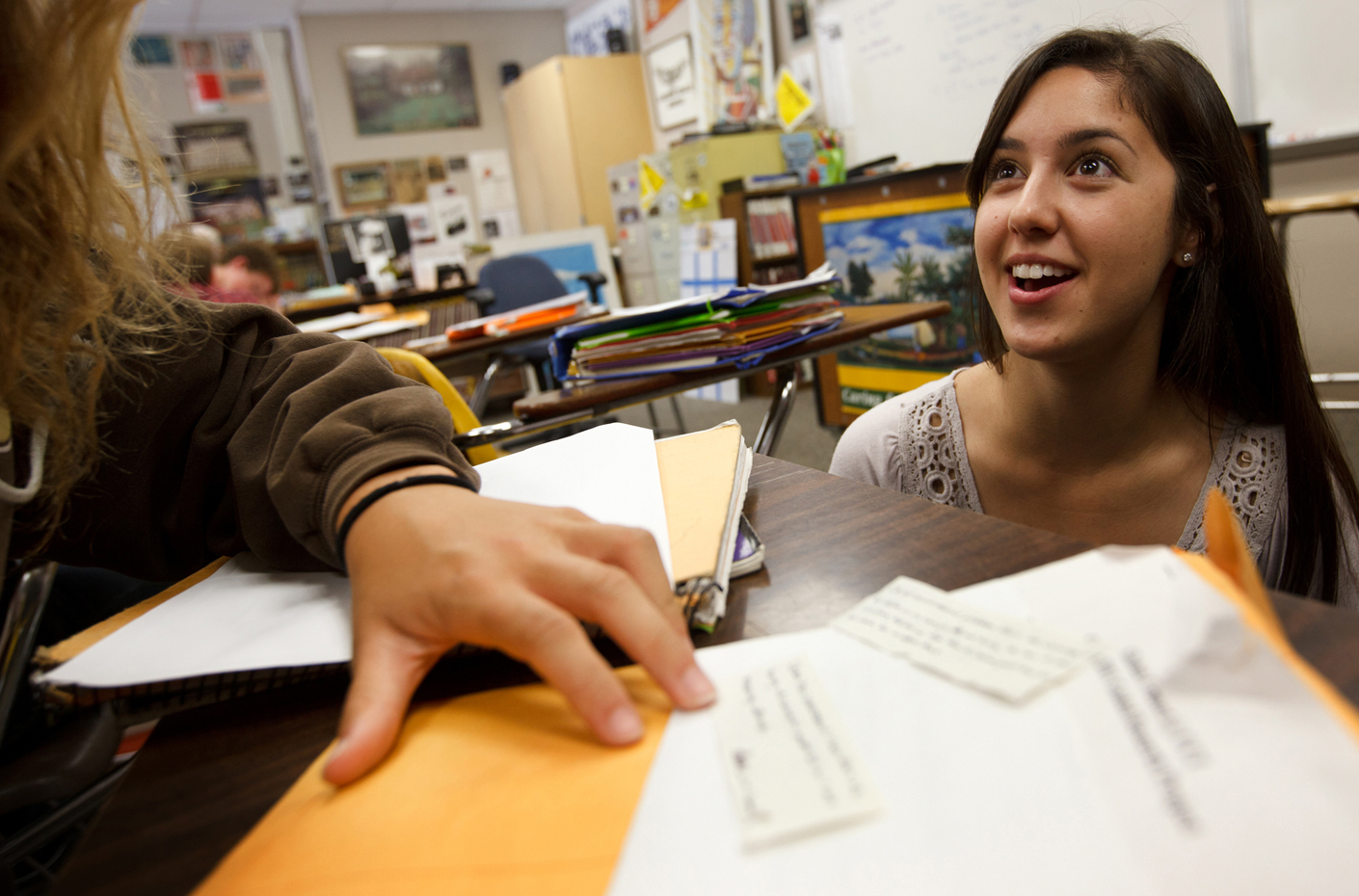 When uprisings broke out across Egypt in January, students at Laguna Hills High School were among the millions around the world tracking developments via the Web and mobile devices. What turned into a full-blown revolution resulting in the successful overthrow of a 30-year presidency became one of the students’ key lessons on globalized technology in “International Relations,” a high school course designed and taught through UC Irvine’s Global Connect program.

“The course helps translate – and give context to – all the online news this younger generation of students is receiving on a daily basis,” says Ellen Schlosser, the program’s founding director.

UCI faculty and students involved in Global Connect develop issue-focused lesson plans that they team-teach alongside high school educators in the Newport-Mesa and Saddleback Valley school districts. Topics include climate change, terrorism, mass media, and technology in a global society – areas not covered under current state education standards but in which UCI researchers excel.

Launched in 2001 through the School of Social Sciences as weekly, UCI-led presentations in local high schools, Global Connect has morphed into a yearlong, structured global studies course. In March, the 36-week curriculum was approved by the University of California regents as an “a-g” elective, meaning that credit from the course may be applied to the one-year college preparatory elective requirement that high school students must meet to be admitted to any of the UC campuses.

“Working with Global Connect has allowed us to better prepare our students for a lifetime of learning, growth and adaptation to warp-speed world change,” says Sean Boulton, principal of Laguna Hills High School, which has hosted the program from its beginning.

“Global Connect helps us achieve our goal of creating better global citizens while at the same time helping those of our students interested in applying to a UC or Cal State school by fulfilling an admission requirement.”

The past three years’ K-12 funding cuts – totaling more than $18 billion statewide – have drastically reduced support in many nonessential areas, he notes, and partnership programs such as Global Connect have addressed a gap in the international studies curriculum at many local high schools.

“A Laguna Hills High School education that includes Global Connect is a bridge from the past to the future, from high school to career, from campus community to lifelong connections, and from tradition to relevance,” Boulton says.

On June 3, the program wrapped up another productive year with its annual high school symposium, held at UCI. More than 250 students from Costa Mesa, Estancia, El Toro and Laguna Hills high schools attended and highlighted what they had learned through self-designed videos and essays featuring creative solutions to international problems.

Schlosser estimates that in its decade of existence, the program has reached nearly 8,000 Orange County middle and high school students. Almost 400 UCI undergraduate and graduate interns have helped develop and teach course content, and more than two-thirds of the undergraduates have gone on to attend graduate school or become educators.

“Global Connect has taught me that a successful college career goes far beyond obtaining solid grades and going to every class,” says Digo Takahashi, one of 65 undergraduate program interns for 2010-11.

“Through my involvement in Global Connect, I was able to strengthen my communication and public speaking skills as well as my ability to translate college-level social science curricula to the high school level.”

One of five interns from this year’s undergraduate contingent accepted into the competitive Teach for America program, Takahashi – who just graduated with a degree in political science – will head to the Bay Area this fall to teach low-income students. Six former interns have received Fulbright scholarships.

At the national level, the program has been recognized in a somewhat different light: Rep. Loretta Sanchez of California used Global Connect as a model in drafting the U.S. & the World Education Act. Introduced to the House of Representatives in 2008 and again in 2009, it proposes $200 million in federal funding to ramp up international studies education and programs in K-12 classrooms.

While the bill has yet to become law, Global Connect continues to thrive. Schlosser is optimistic that future legislation and an improved state budget for both K-12 and higher education will help programs like hers uphold UCI’s mission of community service.

“My hope is that we can replicate the university-high school global studies bridge throughout California and eventually add global studies courses permanently into state standards,” she says. “Global Connect is proof that innovation in education can be achieved through real, on-the-ground collaboration.”

Interested in getting involved?  A Global Connect Community Advisory Board is being formed in the UCI School of Social Sciences to explore new opportunities for replicating and funding on-going efforts to bring the 21st century global community to California’s secondary classrooms.  Meetings are scheduled to begin in August.  Interested volunteers should contact Ellen Schlosser, edschlos@uci.edu or 949-824-3596.