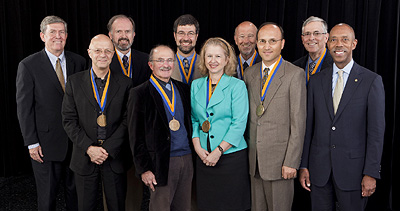 Etel Solingen, political science professor and UCI Chancellor’s Professor, has been selected to serve as president-elect of the International Studies Association (ISA).  Her term as acting president of the 4,000+ member organization will begin in 2012 following one year of service as president-elect which officially begins in March 2011 at the association's annual meeting in Montreal.  Solingen is a past vice-president of ISA, and past-president of the organization’s International Political Economy section.

An internationally recognized political science scholar, Solingen is one of the world's foremost experts on nuclear proliferation, international political economy, and regional orders. She has participated in various "Track Two" meetings with academic and government officials designed to address international conflicts and has lectured extensively at research institutes worldwide. In 2008, her book Nuclear Logics: Contrasting Paths in East Asia and the Middle East received the American Political Science Association's (APSA) Woodrow Wilson Foundation Award for the best book on government, politics, or international affairs and the Robert Jervis and Paul Schroeder Award for the best book on international history and politics, awarded by the Section on International History and Politics of APSA. Recently, she received a grant from the Carnegie Corporation to apply her theoretical work to improve our understanding of the effectiveness of economic sanctions and positive inducements in preventing nuclear proliferation.  Solingen has also served as chair of the steering committee for the University of California's system-wide Institute on Global Conflict and Cooperation and was part of an APSA special task force focused on improving U.S. standing in world affairs.  She is a past recipient of the Excellence in Mentorship Award from APSA and a Distinguished Teaching Award from UCI's Academic Senate and currently serves as review essay editor of International Organization, the leading journal in the field of international political economy.