the one to ASK

Elizabeth Montoya, sociology and immunology and microbiology senior, achieves success one question at a time 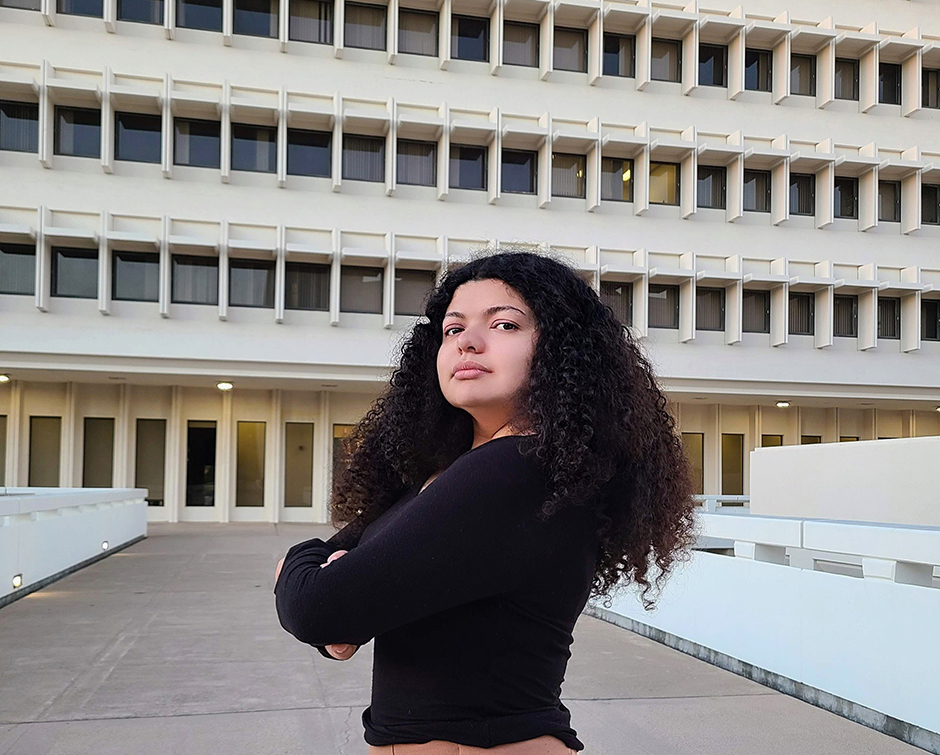 In a way, Elizabeth Montoya’s life trajectory has been dictated by her ability to ask questions. When she was about seven, her father told her she should go to college because she was full of questions. Montoya didn’t really know what college was back then or how to get there (again, she was only seven), but sometime after, when she was at the public library, she found pamphlets about attending college and read them.

Fast forward to today where Montoya now finds herself about to graduate from UCI with an honors thesis about Central American immigrants’ access to health care. She’s been awarded a Fulbright award to study abroad in London, and she’s been accepted to Queen Mary University of London’s master of science program in global public health and policy.

“I’m grateful for the love and support of my family and friends, and I am so happy to be part of the forever Anteater family - one that has supported me and given me the resources to achieve more and help others reach their potential,” she says.

“I was already translating for my parents at age five. It was up to me to ask questions and figure out what my resources were. I realized I could share what I learned with others. I knew I wasn’t the only one who didn’t know what to do,” she says.

When asked if she is naturally shy, she says she isn’t sure because she never had the chance to be. “If anything, it made me very outspoken, which has been beneficial in navigating academia. I don’t get nervous asking professors questions,” she says.

Andrew Penner, sociology professor and Montoya’s mentor, is impressed with how she navigates classroom discussions. “She’s the kind of contributor to a discussion that I aspire to be. She’s someone who’s thoughtful and isn’t reticent to talk, but picks her moments carefully. She has insightful things to say and contributes generously, but doesn’t dominate the space. After you walk away, you find yourself thinking about something she said,” says Penner.

Road scholar
Around the time Montoya’s father was telling her she should go to college, she already knew she was interested in the medical field. So when she went to a doctor’s appointment, she asked the doctor what she needed to do to become a doctor, too.

“I liked the idea of helping people and I thought it was awesome that doctors could make people feel better. I also thought the level of respect they had was amazing,” she says.

At UCI, she’s double majored in immunology and microbiology and sociology. “I’m so interested in our immune system and how it can both hurt and help us,” she says.

Her introduction to sociology came when she registered for a course to fulfill a general education requirement. After that first class, she was hooked. “I thought it was so cool to be able to study societies and try to understand the whole perspective. It’s so important for a doctor to not only understand the science, but the human aspect of the patient as well,” she says.

Penner is struck by her particular combination of majors. “They are two fields that go together in my mind, but aren’t typically put together. The fact that she bridged these fields was really fantastic,” he says.

When the pandemic hit, Montoya was commuting to campus by bus from Long Beach. She spent four hours on the bus each day to attend classes. When the campus went remote and Montoya no longer had to commute, she discovered she had a lot more time on her hands. She redirected that time to taking more classes.

During the 2020-21 academic year, she enrolled in 25 units or about six courses per quarter. (Students are considered full-time when they take three courses per quarter.) The reason she registered for so many classes was because transfer students are given three years to complete their degree. If she wanted to double major, she’d have to up her course load. She did and made the Dean’s List every quarter.

Luckily, Montoya no longer has to worry about a long commute. She lives on campus as a resident advisor (RA) for a dorm that houses transfer students like herself. Last year, during the pandemic, she really had to think on her feet to come up with programming for her residents via Zoom.

“I wanted to prepare them for when school was back in-person. I told them about the resources available on campus. If I was a new student, it was the stuff that I would want to know,” she says.

Seek and she shall find
Montoya’s impressive list of activities is a result of her talent, goodwill, and ambition. She’s nothing if not resourceful and finds opportunities through research and by asking around.

And her method has paid off. She's currently funded by the National Institutes of Health as a MARC’s scholar and works in a lab as part of the program. There, she leads her own research project and has trained other undergraduates in animal husbandry and genotyping.

She hosts a public affairs show on K-UCI, the campus radio station, where she finds herself asking even more questions.

And she’s a senator for the Associated Students of UCI (ASUCI). The accomplishment for which Montoya is most proud is helping to establish a “safety-net grant” for students who needed extra financial support during the pandemic, something she helped set up with her fellow senators. She read over 100 applications for one of the largest grants ASUCI has ever funded.

I want to be a role model. I want to give back.

The first step
Montoya also mentors and tutors middle-school students in STEM subjects through a non-profit called Viva Tech. “When I tell them I’m a first-generation college student, they can’t believe it. I want to be a role model. I want to give back,” she says.

Montoya envisions that mentoring will always be a part of her life. She wants to attend graduate school to study immunology and she eventually wants to work with marginalized communities to help overcome health disparities.

“I want to be a wealth of knowledge for other students and for my siblings. I want to tell them not to be afraid and to ask for help. Most of the time, people want to help you, but you have to take the first step,” she says.

And if her sisters, fellow students, or frankly anyone, have a question about how to become a top scholar while lifting others up, she’ll be the one to ask.