Commencement speaker Akunna Ekeh’s intelligence and character shine through her work as a mentor, entrepreneur, and soon-to-be law student 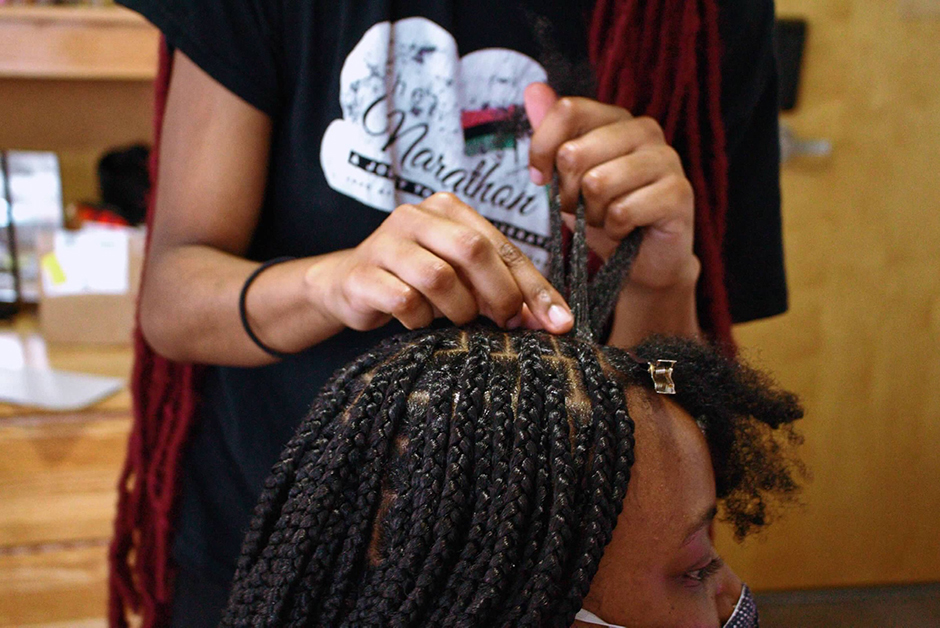 When the pandemic hit, Akunna Ekeh saw an unmet need and started her own hair braiding business.

As graduation approaches, Akunna Ekeh is feeling grateful. The political science major is one of only two undergraduate students selected to address the School of Social Sciences graduating class of 2022, and she wants to tell everyone how she feels.

“I want to thank my parents and UCI publicly. I’ve gained so much confidence and wisdom here. Ever since I was little, my parents have stressed education. They told me it would give me freedom,” she says.

In the fall, she’ll be flexing that freedom at law school – just as soon as she decides which offer to accept. She’s been admitted to some of the top programs in the country, including Duke, Georgetown, Berkeley, UCLA, USC, Vanderbilt, Howard, ASU, and Emory.

“My parents worked hard to give me every tool I need to succeed. I want to take advantage of every opportunity,” she says. “Calling my parents to tell them my LSAT score has been the highlight of my life. I was so proud to tell them that their hard work was worth it.”

As she reflects on her time as an Anteater with her eye toward all of the great things ahead for her and her classmates, Ekeh’s message is one of hope and inspiration.

“When you’re doing something you love and you’re fighting for what you believe in, success comes naturally. There’s no need to rush. We have a lot of work to do as a society and we should embrace it. For me, success is about giving back to my community and being able to look back on my life and say that I contributed positively to the world.” 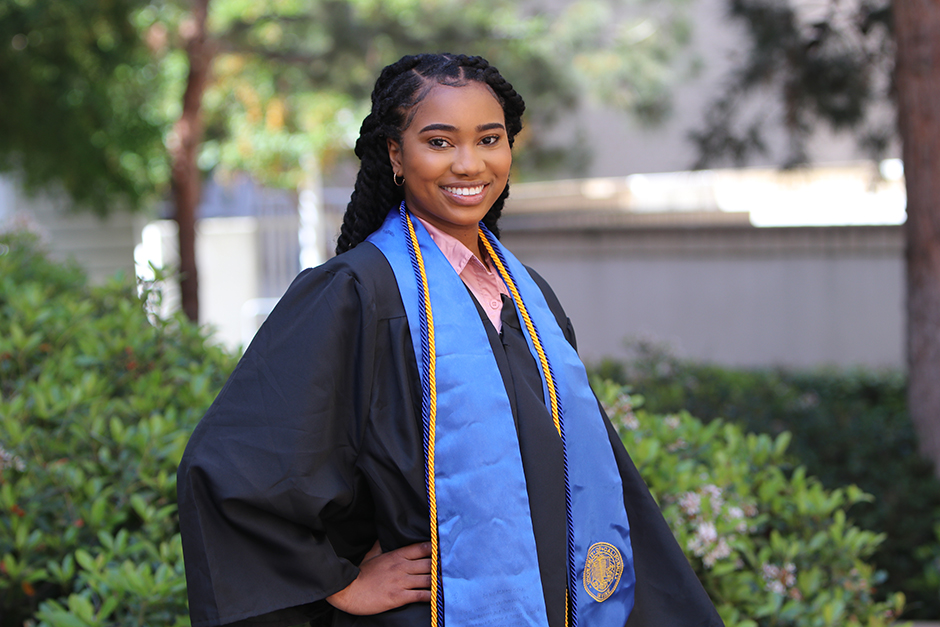 Akunna Ekeh has her pick of law schools following graduation in spring.

Family ties
Ekeh has made the most of her time at UCI and stands out, not just for academic excellence, but also for the positivity and personal touch she’s brought to her courses and extracurricular activities.

“I call my students my school sons and daughters, but I wish she was my real daughter. You can quote me on that,” says political science lecturer Alfonso Valdez, who had Ekeh as a student in several of his courses.

“She’s a wonderful person. She’s going to be successful no matter what she does,” he says. “She has a unique aura that invites people to talk to her. She’s confident, but not boastful. She’s strong, but not a bull in a china shop. She has an openness that makes people feel comfortable in who and what they are.”

Ekeh grew up in Antioch as the second of four children in what felt like the “perfect place.” Her parents were born in Nigeria and moved to the U.S. about 25 years ago. While most of her extended family remains in Nigeria, she was surrounded by a close-knit community of her parents’ Nigerian-born friends. In childhood, Ekeh was independent and could often be found with her nose in a book and two to three others stacked on her nightstand.

The model set by her parents has fueled her ambition from day one. Her mother worked nightshifts as a registered nurse so that she could attend her children’s activities during the day. Her father’s hours were no better. As an entrepreneur, he couldn’t count on a regular schedule and would often wake up at 3:00 or 4:00 in the morning for work. Despite his “crazy” hours, Ekeh’s father seemed to find the time and energy to take Ekeh and her siblings to the movies, the water park, or to San Francisco on the weekends.

For me, success is about giving back to my community and being able to look back on my life and say that I contributed positively to the world.

“My parents had the biggest impact on me. They didn’t have gender roles. My dad cooks and cleans, just as much as my mom. Seeing how my dad would invite my mom into conversations showed me the respect my parents have for each other and taught me that my voice deserves to be heard in all spaces,” she says.

An immediate connection
Ekeh received a full scholarship to an out-of-state university, but after visiting UCI’s campus she knew where she was going to enroll.

“I went on a tour and fell in love. The campus was beautiful. I attended Black Family Celebrate UCI and met students who were starting the same year. The connection was there. I told my parents, UCI is where it’s at.”

While Ekeh was often content being alone with a book throughout childhood, she found a new appreciation for mentors and community once she arrived on campus.

“At UCI, I met people who helped bring out the best in me. Thais, from housing, encouraged me to become a resident advisor my third and fourth year and it turned out to be great. My students would come to my door and bring me dinner because they knew I couldn’t cook. I saw the importance of being a resource for others. I’m still in contact with my former students,” she says.

Ekeh also served as a resource for low-income high school students through UCI’s Saturday Academy of Law program. Every weekend, she would log onto Zoom to speak with students about law, first amendment rights, and their plans for attending college.

“The program motivated me to possibly become a professor one day. Plus, I think there was a benefit to the students seeing someone who is like them, doing the type of things they may want to pursue,” she says. 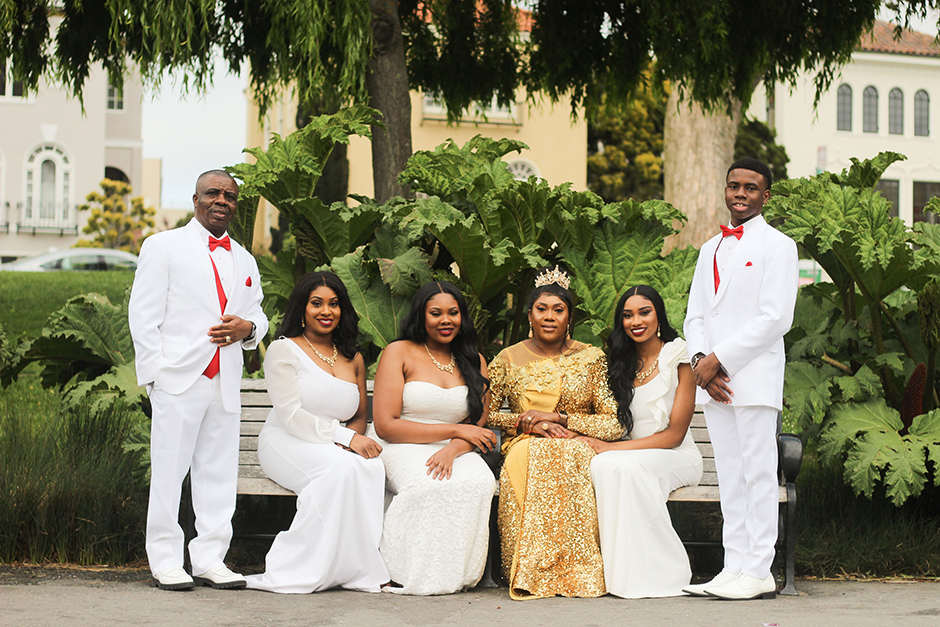 Akunna and her family at her mother's 50th birthday party.

Another fond memory Ekeh has is living in the Academic Excellence Black Scholars House her freshman year. She remembers staying up until early morning getting to know her housemates and discussing their political beliefs. “It was really great to be in that house. So many lasting friendships were formed there,” she says.

Braiding business
When the pandemic hit and canceled or forced many in-person activities to go online, Ekeh kept plenty busy as a full-time student and volunteer. But when she discovered she had some extra time on her hands, she turned to YouTube to learn how to brain her own hair. Soon, she was braiding her friends’ hair and posting their pictures on her Instagram. It wasn’t long before others started contacting her to see if she could do their hair and her entrepreneurial spirit took hold. She set up a website so people could make appointments and her hair braiding business was born. During her busiest period, Ekeh had four to five clients a week, with each appointment taking five to eight hours.

“We watch TV and talk, often about our experience living in Irvine,” says Ekeh about the time she spent with her clients. “It’s a nice bonding experience and a nice chance to meet another Black person. A lot of people came from outside of UCI."

"I met a woman who was in the secret service at the White House,” she says.

In addition to practicing law, Ekeh hopes that someday she’ll be able to open a small hair salon on the side.

“The goal is to service everyone, but to offer special prices to high school and middle school students so that they can get their hair done at affordable prices - less than 50% of the market price. My dad and I have been discussing this dream for some time,” she says.

Legal ambition
First, though, she’ll be working to fulfill her dream of becoming a lawyer – one she’s had since she was little.

“I remember my parents struggling to get my grandparents visas. I saw the power of laws and policies. When I finish my education, I will be able to be the bridge between the law and the average person.”

If past performance is any indication, Ekeh will make a huge mark on the lives she touches.

“She’s not your standard student,” says Valdez. “She’s the cream of the crop. Not only academically, but it’s her demeaner, her willingness to help others, her caring attitude. She’s one of only a handful of students who stood out like this in the 16 years I’ve taught at UCI. She’s a cut above the rest."