An Agent of Change

an agent of change

Elizabeth Hafen, political science and psychology senior, credits the student enrichment programs in UCI social sciences for inspiring her plans to be a community changemaker 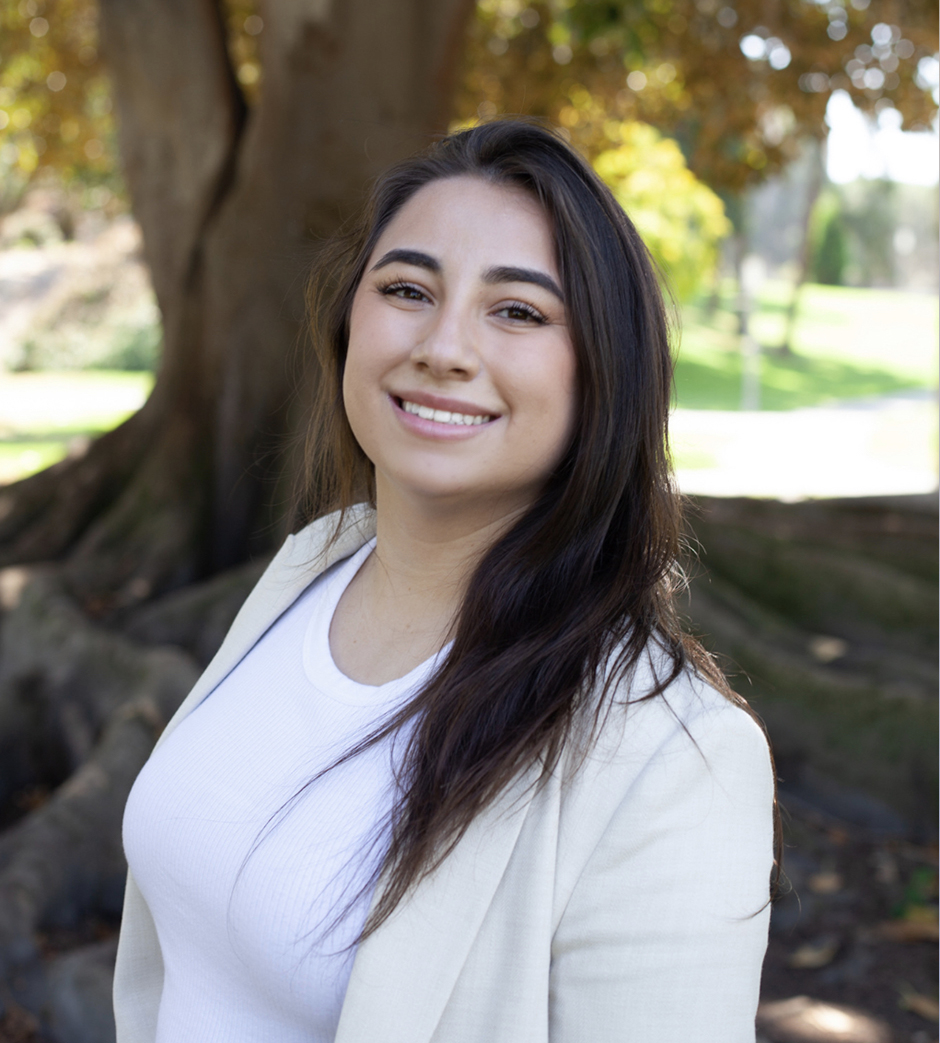 Fifth-year senior Elizabeth Hafen sees herself as a product of the many programs the UCI School of Social Sciences has to offer. From the First-Generation, First Quarter Challenge (FGFQ) and the Summer Academic Enrichment Program (SAEP) to the Deconstructing Diversity Initiative (DDI), the Diversity, Inclusion and Racial Healing Ambassador Program (DIRHA), and the Dean’s Ambassadors Council, she’s taken advantage of nearly every enrichment program the school offers.

For her, each opportunity led to another and cemented her drive to be an agent of change for her community.

Hafen and her siblings grew up watching their single mother work all hours as a family attorney in Mexico. Ask Hafen where she got her drive from, and she needn’t look far.

When she was in middle school, she and her family escaped a domestic violence situation. They moved into a women’s shelter where they stayed until she was partway through high school.

“It was really rough,” she says about those years. “It made me want to help others, so they don’t have to live through what I lived through. Having been raised in a women’s shelter made me want to be a positive vehicle for change,” she says.

When she arrived on campus, Hafen wasted no time seeking out resources to do just that. She received an email to join FGFQ and used it as her launchpad. The support program helps first-gen students transition to university life by creating small group communities where students can share and learn from each other’s experiences. Through her FGFQ mentor, Hafen discovered more programs, which led her to others.

She credits a lot of her success in college to the mentors she’s found at UCI – and she encourages other students to seek out the same.

“Find a mentor who encourages and pushes you to be your very best, and keeps you on your toes,” she says.

Her mentor encouraged her to participate in SAEP, an intensive five-week program designed to offer research experience to first-generation social sciences majors. It was here where Hafen believes her critical-thinking skills were kicked into high gear as she began to reflect on her own story and considered what issues were important to her.

“I remember growing up asking why certain things were the way they were and being told that’s just the way it is. After coming to UCI and learning about the policies and systems that are in place throughout society, I realized why it was so hard for my family to be successful and I want to help change that,” she says.

Teresa Neighbors, who directs the school’s diversity, equity, and inclusion undergraduate programs and was previously director of SAEP, was impressed with Hafen’s critical thinking skills and ability to apply what she was learning.

“Elizabeth quickly stood out as a well-rounded student, equally focused on academics as well as community service to improve equity,” Neighbors says.

From there, Hafen went on to join DDI, another program that was particularly formative from both an academic and personal perspective. Participants in DDI explore critical issues that are impacted by race and race relations in America, such as anti-blackness; the Asian American achievement paradox; allyship and the politics of solidarity; the queer rights movement; art and racial resilience; arguments for and critiques of multicultural/diversity initiatives; and more. The intensive year-long program aims to support students in realizing their power to reduce racial/ethnic prejudice both within and beyond college campuses. Throughout the year, students participate in seminars and travel to sites of historical and contemporary importance to the experience of race in America. They meet with policy makers, local officials, nonprofit organizations, and community members to gain insights into race issues from the people living there.

“Travel allows students to strengthen their skills at navigating important - and often controversial - topics with sensitivity to the diverse narratives that underlie issues of race in America,” says Neighbors.

During spring break of her second year, Hafen traveled with her DDI cohort to Chicago, Washington, D.C., Atlanta, Montgomery, and New Orleans. One of the most memorable moments of the trip was a visit to the National Memorial for Peace and Justice in Montgomery, Alabama. The memorial structure at the center of the site is constructed of over 800 steel monuments, one for each county in the U.S. where a racial terror lynching took place. As visitors walk through the exhibit, the floor descends until the columns are dangling above and the visitors are in the position of spectator. 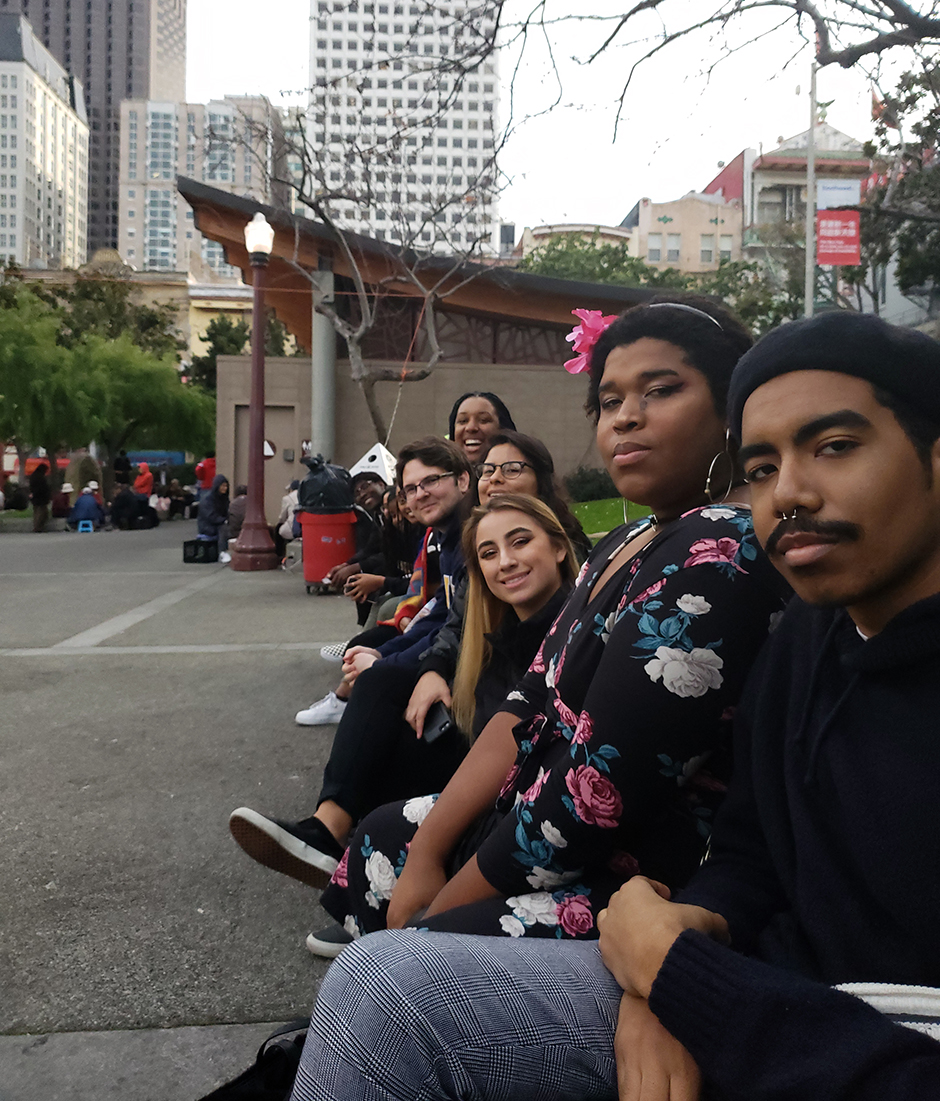 Elizabeth Hafen with her DDI cohort in San Francisco.

“The heaviness weighs on your shoulders. The columns keep going and going,” says Hafen.

“You can learn about slavery in textbooks, but the memorial gave me a different type of understanding.”

Hafen, who is Mexican-American, describes how her cohort drove between destinations on the Southern leg of their trip.

“Most of my peers were Black and it was a very different and difficult experience driving through the South learning what we had just learned,” she says. “After DDI, I wanted to be more involved and have more of an impact on my community. If I was going to talk the talk, I wanted to walk the walk. I tried not to impose, but to be an open ear and a good ally,” Hafen says.

She honed those skills through her role as a mentor to high school students in DIRHA. The program, created in response to the race-based violence of the 2017 Charlottesville protest, examines the often-unconscious beliefs created by racism. As a DIRHA mentor, Hafen led weekly discussions on topics ranging from immigration, gender, and sexuality to religious diversity.

“Elizabeth quickly earned the trust and respect of her mentees through her ability to relate and lead with compassion,” says Neighbors.

Approximately 20 high schools participate in DIRHA across Orange County. A total of 500 mentors have reached an estimated 25,000 youth, teachers, and community members through their programs.

As a mentor, Hafen challenges and encourages her students to broaden how they think. “I tell them that they weren’t born with this ideology and ask them to question where it came from. I want them to understand why they may think a certain way,” she says.

After she graduates in spring, Hafen plans to pursue a joint Master of Public Policy and J.D. program. She’s developed a taste for government through her service as a senator for ASUCI and member of the Dean’s Ambassador’s Council, and she wonders if maybe - just maybe - she might want to pursue a life in politics one day.

But before then, she has dreams of starting her own law firm that specializes in public policy and legislation targeted toward community improvement. Senator Hafen or not, she is already exceptional and an embodiment of the American dream.