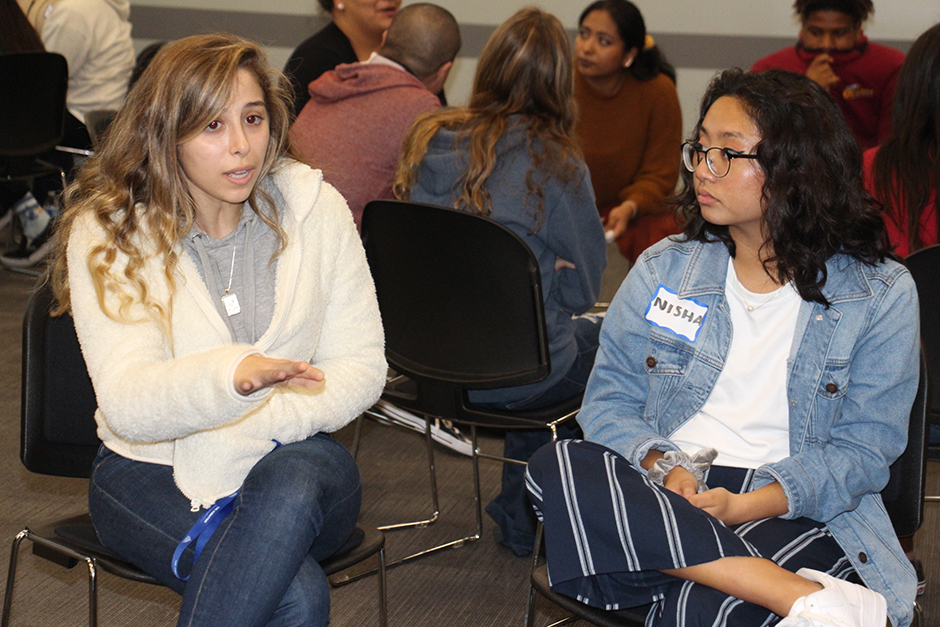 Nora Beik (left), an international studies and political science major at UCI and a student leader in the Diversity, Inclusion & Racial Healing Ambassador Program, chats with a local high schooler.

Make two lists: one with your top three role models and one with the names of five people outside of family with whom you spend the most time. Now ask yourself: Are these people the same religion, race, ethnicity, education level and socioeconomic background as me?

“It’s such an eye-opener for them to see how the people they hang out with and aspire to be are, most often, just like them,” says the third-year international studies and political science major. As the discussion turns to the comfort students feel when they’re with people like themselves, Beik’s opportunity to spark even the smallest sliver of change arises.

“When you’re not in the majority, you feel small, unheard,” she shares.

That’s an experience that goes back to her childhood. Beik was born and raised in Fountain Valley, the middle of three daughters to parents who immigrated to the U.S. from Damascus, Syria, nearly three decades ago.

“Growing up as an Arab Muslim in post 9/11 America, I had an acute awareness of the fact that I was different from my peers,” she says. Saturday school to learn Arabic, summers in Syria with extended family and a holiday calendar that didn’t include Christmas, Halloween, or other typically “American” celebrations left Beik feeling like an outsider. Moreover, not having friends or classmates with whom she felt she could safely and unabashedly share her own traditions made her feel unrelatable and alone. So Beik kept her beliefs and culture confined to her home. 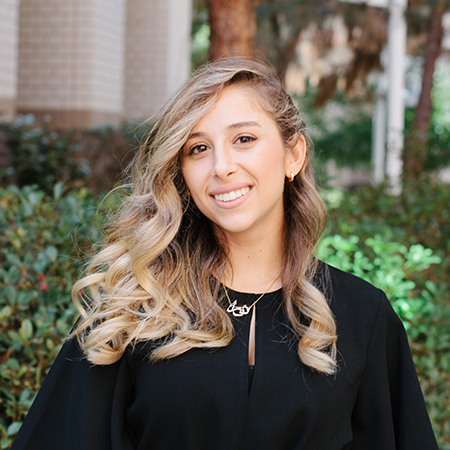 It wasn’t until the end of her first year as an Anteater that she found her footing, thanks to a course she took on deconstructing diversity.

“For the first time, I got to be part of discussions about controversial issues like race, gender, religion, and sexuality,” Beik says. “And it was amazing.”

The class motivated her to become involved in campus groups with diversity at their core, including the Deconstructing Diversity Initiative. Part of its inaugural cohort, she spent a summer visiting Atlanta, New Orleans, Chicago, and Washington, D.C., and meeting with social justice advocates.

As academic chair of the School of Social Sciences Dean’s Ambassadors Council, Beik leads the quarterly Dinner & Discourse series of roundtable discussions among faculty and students on difficult subjects. And now, as one of the first members of the Diversity, Inclusion & Racial Healing Ambassador Program, she’s working hard to change the diversity narrative for others.

“Nora’s experience of feeling like an outsider because of her religion and culture is one of the key things we’re working to mitigate,” says social sciences lecturer Teresa Neighbors, who directs both DIRHA and the Deconstructing Diversity Initiative. “DIRHA seeks to build empathy, foster cultural competency, and reduce stereotypes based on a false belief in a hierarchy of human value.

“Through experiential learning, mentorship and leadership development, the program provides youth with tangible skills to improve relations across racial, religious, cultural, sexual, and economic divides, along with the self-efficacy to work toward more equitable communities.”

A campus-led community outreach program launched in 2018 with $300,000 in seed funding from the Samueli Foundation, DIRHA sends student leaders to participating local high schools for weekly discussions on such tough topics as race, gender, and religion. Four times a year, the teens come to UCI for faculty- and staff-led seminars in which they learn how to make the material digestible, thought-provoking, and age-appropriate for diversity-focused projects they implement within their schools.

I get to help these students grow into the adults they want to be, even if they don’t know it yet.

This year’s cohort at San Juan Hills High School, in San Juan Capistrano, launched Unity Week, a five-day lunch seminar series with speakers addressing different issues. “We had close to 200 students attend each day,” says Spanish teacher Fernanda Villalba, the school’s DIRHA coordinator. “The participants not only have grown as leaders but have been educated in some very important topics and exposed to new ways of thinking. Our first Unity Week was a huge success, and I know that this is just the beginning of a cultural change that, hopefully, will become a norm, uniting many more students in the future.”

In January, the Samueli Foundation committed another $300,000 over two years to support the program’s growth. That same month, the Association of American Colleges & Universities cited DIRHA and similar racial justice programs on campus – including the Deconstructing Diversity Initiative and the Olive Tree Initiative – in naming UCI one of 13 new Truth, Racial Healing & Transformation Campus Centers. The designation came with an invitation for five center team members to attend the AAC&U’s annual summer institute in Atlanta and $20,000 to help fund the UCI center – which will serve as a hub for collaborative racial justice and inclusion programs on campus and in the surrounding area.

For Beik, the value of the work really hits home as she leads the DIRHA group at her alma mater, Fountain Valley High School.

“I get to help these students grow into the adults they want to be, even if they don’t know it yet. I get to help in a way that’s real, and I get to see the impact of what I’m doing as they implement their projects,” she says. “It’s amazing to see the breakthrough in their eyes when they realize the gravity of the lessons we cover. That’s where, I think, we start to create change, and that’s so incredibly rewarding.”