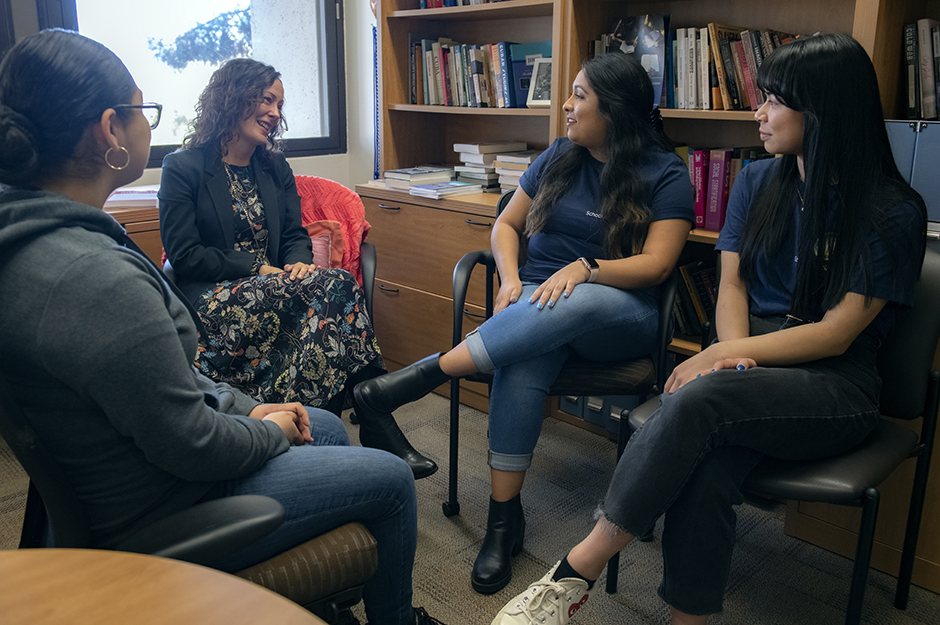 Educator, researcher, and mentor. For Anita Casavantes Bradford, the roles are inseparable, each serving as fuel for the others. The first in her low-income family to go to college, she experienced early on the lifechanging power of having academic advocates in her corner. Now, as an associate professor of Chicano/Latino studies and history at UCI, she’s paying it forward to make sure students like her have the opportunity to thrive.

Her work earned her the 2019-20 Academic Senate Faculty Award for Mentorship, an honor that punctuates the countless hours she’s dedicated to helping first-generation Anteaters through programs like the First-Generation Faculty Initiative and the First-Generation, First Quarter Challenge.

“I want our first-gen students to recognize how their experience has shaped their ideas of education and how that can motivate, rather than limit, their aspirations,” she says, reflecting on an experience with which she’s intimately familiar.

Mentors matter
Casavantes Bradford and her two siblings grew up in Vancouver, raised by a single mother with a tenth-grade education. By the time she was eight, Casavantes Bradford understood that education was going to be her ticket to a better life – one that she would have to fight hard to make happen.

“My mother valued school because she didn’t have a chance to finish,” Casavantes Bradford says. “And her position isn’t unique. Parents of first-gen students tend to value education in an urgent way that’s related to how hard their lives have been without it.”

But lack of experience in school can oftentimes leave parents of first-gen students ill-equipped to guide their children through the sometimes complicated education system. For Casavantes Bradford, her third-grade teacher helped fill that gap.

Through positive reinforcement promoting intelligence and work ethic as part of self-worth, Mrs. Vedder pushed the young scholar to aim higher. And she wasn’t the only one.

“Every few years from there, I had someone like that – someone who worked with kids like me and saw that we had potential outside the circumstances we were born into,” she says. It was because of her academic mentors that Casavantes Bradford aspired to attend college. She got accepted to Simon Fraser University in Vancouver after getting her start in community college, at which time she was also working full time as a live in housekeeper and nanny. She majored in history and literature and earned her teaching credential – somewhat by default, she says.

“Teachers were the only type of professional people I’d encountered up to that point, and a career as an educator was something I could wrap my head around,” she says.

She rushed through her program so that she could get a job – an experience with which many first-gen students can relate.

“Part of the first-gen university motivation is the fear that’s gained from first-hand experience dealing with questions like will we pay for rent this month or be sleeping on someone’s couch, or can we afford food, medicine,” she says. “It’s built into your DNA when you’re first-gen and low income.”

While these very real consequences tend to be pretty powerful motivators, they also limit the risks students take in studying something they’re passionate about.

“I know what they’re going through, making calculations about what they like vs what will get them a job,” she says. The same motivation - and fear - drove her pursuit of a career as a high school educator for awhile, which she fortunately loved until she got a call with her acceptance to graduate school. 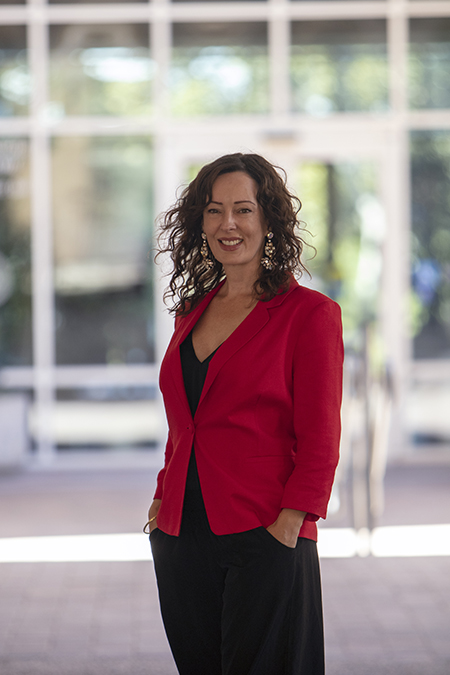 Aiding Anteaters
She completed her Ph.D. at UC San Diego and spent two years as a UC Presidents’ Postdoctoral Fellow before being hired in 2013 as a faculty member at UCI where more than half of the campus’s students are the first in their family to go to college.

“I was teaching a course on immigration my first quarter here, and after about three weeks of teaching, a group of students came to visit me during office hours,” she says.

Before long, they “outed” themselves as undocumented, first-gen students. In Casavantes Bradford, they sensed an ally and they found one. Big time. She soon became the faculty advisor to the student organization then known as DREAMS @ UCI, supporting the students in their efforts to establish what is now the UCI DREAM Center.

“They were hard working kids who’d overcome enormous obstacles; they were hopeful in the face of tremendous fear and uncertainty; they were the most altruistic students despite their circumstances,” she says. “My role as a mentor on campus began thanks to those courageous students.”

Hearing their struggles as first-gen students trying to navigate the university experience brought her back to her own collegiate start. She got to thinking there were likely other faculty members at UCI with similar stories.

With support from the School of Social Sciences and the Division of Undergraduate Education (DUE), she helped launch the First-Generation Faculty Initiative. The program brings together first-gen faculty and advocates to foster a campus climate that supports and guides students like them at UCI.

She also created, launched, and continues to serve as faculty co-director of the First Generation, First Quarter Challenge in the School of Social Sciences. Developed by social sciences faculty, students, and staff who were the first in their family to attend college and know firsthand what it takes to succeed at UCI, the program offers support, guidance, and friendship to other first-gen students as they settle into the university.

“My perspective on mentorship is that you don’t go into somewhere with grand ideas about what people need and impose it. You instead sit and listen and in that process, they’ll tell you what they need. If you can do something to help, that’s your cue.” 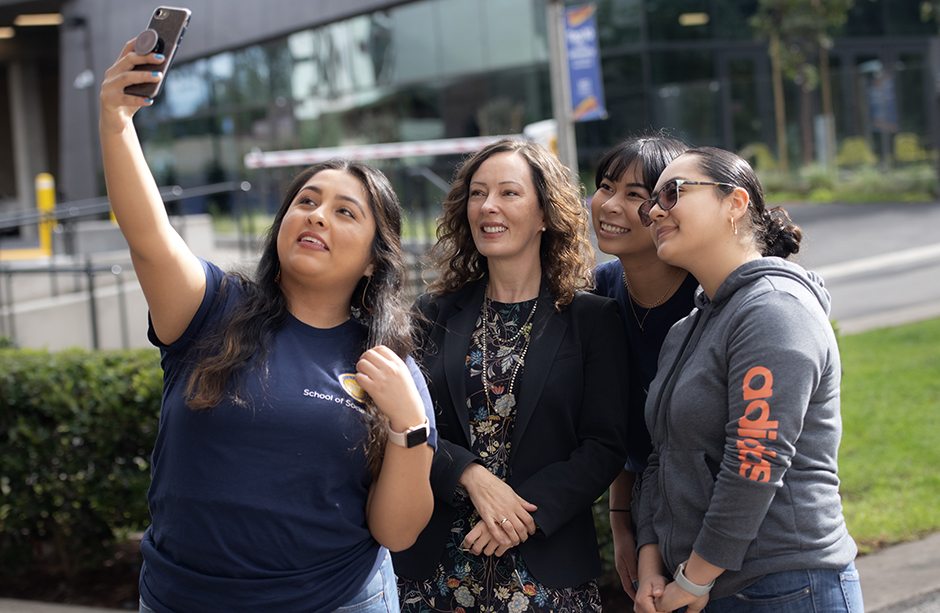 Intertwined interests
The same notion guides her research, through which she uses a historian’s lens to examine links between foreign policy and immigration policy in the U.S. Her first book was on the relationship between childhood and nationalism in revolutionary Cuba and in the Cuban exile community in Miami.

She’s currently working on another book that tells the history of unaccompanied child migration to the U.S., dating from 1930 to today. The topic hits home for many of the first-gen and immigrant students with whom she’s worked.

“A lot of immigrant students – documented and undocumented - don’t feel they belong,” she says. “It’s the same way that first-gen students feel at university. In both cases, the disconnect goes deeper – and is less visible – than any academic difficulties they may also have. While adjusting to university, they are also struggling to understand their place in U.S. history and the broader context of our nation’s immigration policies, while also dealing with the impact of those things on their families. They also have to deal daily with the guilt of being the one who got out - who got to go to university – while many in their families and communities are still struggling.”

I want our first-gen students to recognize how their experience has shaped their ideas of education and how that can motivate, rather than limit, their aspirations.

Award-winning work
She’s been lauded for her efforts. In 2017, she received the Tom Angell Fellowship in recognition of her campuswide mentorship activities. In 2016, she received the Social Sciences Dean’s Award for Outstanding Mentorship, and in 2015, she was honored with UCI’s Outstanding Social Justice Activist Award.

As she continues her research and her work with UCI’s first-gen community, Casavantes Bradford also celebrated the debut of, “Refugee Songs: A Musical Journey,” a musical she wrote and produced that opened in fall 2019 at UC San Diego’s Mandeville Theater.

She’s also deepening her engagement with another UCI student community she’s long been interested in supporting: veterans. Drawing on her firsthand knowledge as the daughter and spouse of military veterans from very different eras, she created the curriculum for UCI’s new veterans studies certificate. She’s hoping to grow the three-part course series into a full-fledged veterans studies program.

“I’m an educator. Part of that is research, and I’m fascinated by it, but I don’t research in a vacuum. It’s part of my identity as an educator. I study things that I hope will help enlighten, heal, and empower my students and their communities. So the same things that motivate my teaching and mentorship are also at the heart of my research agenda. For me, these things are inseparable.”