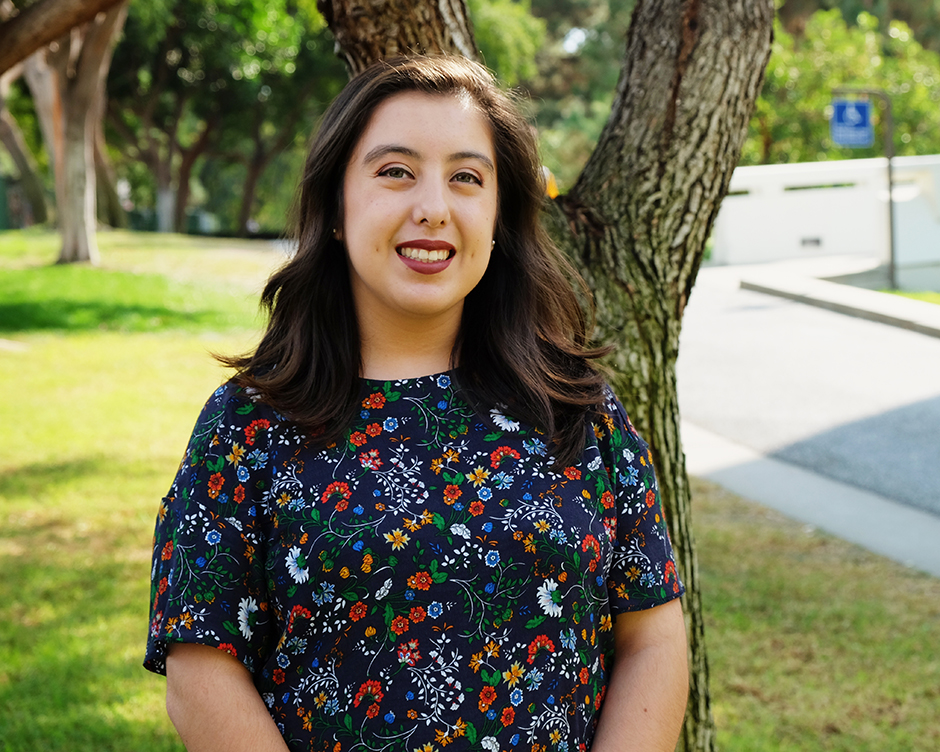 Alondra Lopez may have been named the top freshman at UCI for 2017, but it’s not just new students that can learn from her Aeberhard award-winning endeavors. Though she’s just finishing her sophomore year, the 19-yearold has achievements under her belt that would impress even the most advanced student. In fact, it’s this well-roundedness that earned her the Nicholas Aeberhard Award, which is given annually to one outstanding freshman student on campus who demonstrates student leadership, academic success, and involvement in campus and civic activities.

As a political science and urban studies major, Lopez has already successfully interned for a local politician, acted as a campaign organizer (twice), and served as a teaching assistant mentoring incoming freshmen in the UCI Summer Bridge Program.

On top of which she managed to maintain a 3.87 GPA, on-campus involvements with ASUCI and Hermanas Unidas, and hold down a job to help pay for her school fees. She’s made a strong first impression at UCI, but that doesn’t mean it was smooth sailing from the start. Though she participated in UCI’s Summer Bridge program where she was able to make friends and familiarize herself with the campus, the university was intimidating for the first-generation student.

“I didn’t go out and explore much my first quarter – I was scared,” she says. “I would stay in my dorm.”

Despite her fear, she still pushed herself to get involved in campus organizations, including Hermanas Unidas, ASUCI, and the inaugural First Generation First Quarter Challenge put on by the School of Social Sciences. There, she says she was mentored by the coordinators who gave her advice on everything from what classes to take to how to handle the emotional toll of transitioning to college life. But the experience she found the most valuable in terms of her education was much simpler.

“Part of the First Gen First Quarter Challenge is that you have to ask a faculty member to coffee. It was such a great experience,” Lopez says of her chat with political science professor Robert Uriu. “It was a very intellectual conversation and I learned that I really liked having those kinds of conversations with my professors and friends, outside of the superficial ‘hey, how’s your day’ ones. So after that I started going to office hours more.”

The experience ended up being helpful in many ways, and she recommends that all students at UCI take the same action. Not only was she able to form close bonds with her professors, but she was also able to get a better sense for what she was studying and hone in on a possible career path.

In one day my whole perspective changed and I understood – I want to get a degree and a good job and be able to make a good living for myself doing what I love.

After conversations with her professors about the affects that the presidential election could have on an international scale, she knew she wanted to learn more about the world of politics. So she began working with ASUCI in legislative affairs and, after her mother helped connect her with state assemblyman Miguel Santiago, she asked if she could volunteer with his campaign. She later went on to intern in the 9th District Office of L.A. City Council member Curren Price.

Lopez loved learning about the behind-thescenes workings of a local politician. She would make the trek up to L.A. on weekends to go door to door, make phone calls, and discuss her office’s platform with constituents, all before she was able to vote herself. As she learned more, she was able to integrate her interest in urban planning and think about how the design of the city affects certain residents and why.

“By studying urban planning, I feel like I’ll have that background in terms of knowing how the city was built, and how that affects what’s going on behind the scenes,” she says. “I really like the ‘chisme’ or the ‘gossip’ of politics. I like knowing what’s going on.”

Her interest in state politics became fully formed when she learned more about institutional racism and the “school to prison pipeline” in her political science courses. She immediately thought of her own high school, a charter school that shared a building with the Los Angeles Unified School District. Even though her own school was underfunded, she recalls the public school kids having even less classroom resources and it didn’t seem like they were getting the same push toward college that she was. It made her wonder where she would be had her mother and her teachers not supported her the way they did.

Then, during a shift at Pippin Commons, something clicked.

“My mom used to clean the hallways of my school. She would tell me ‘work hard so you don’t have to do this,’ but I didn’t really think about it that much,” she says. “Then one day the dishwasher broke at Pippin, and I had to stand there and wash dishes for over an hour. I hated it so much. Then I realized this is exactly what she meant. In one day my whole perspective changed and I understood – I want to get a degree and a good job and be able to make a good living for myself doing what I love. My mom is definitely my inspiration.”

Thinking back to her peers who didn’t have college resources and parents to push them to get good grades, Lopez realized that the school system must change to better serve the underprivileged and underrepresented communities.

She ultimately wants to play a part in reforming the education system through a career in local government. But until she can utilize her political science degree to take bigger steps toward that goal, Lopez is happy mentoring students from underprivileged backgrounds. She has volunteered at the Latina Public Service Academy in her hometown, a nonprofit organization that encourages young women to be politically involved, and over the summer she returned to Summer Bridge at UCI, this time as a teaching assistant.

There she taught incoming freshman who were struggling to adapt to college life just like she was. She was able to reassure them, and the experience was also a great way for her to see how much she’d grown in a year.

“I’d been in that same class the summer before and was so scared,” she said. “And there I was, after one year, teaching those students and feeling so confident.”

Lopez has made a strong first impression as an Anteater, and she has plenty of time to make even more of an impact at UCI. For now though, she’s focused on her studies (she is taking her first upper-division courses), serving on the Dean’s Ambassadors Council, and settling in to her new job with the Resident Housing Association. But the most important thing she’s doing?

“I try not to be too stressed about the future,” she says. “I’m excited to talk and interact with more people and just have fun. I don’t know exactly what I want to do or how I’ll get there, but if I was stressing over that I wouldn’t have the energy to try new opportunities and explore.” ●