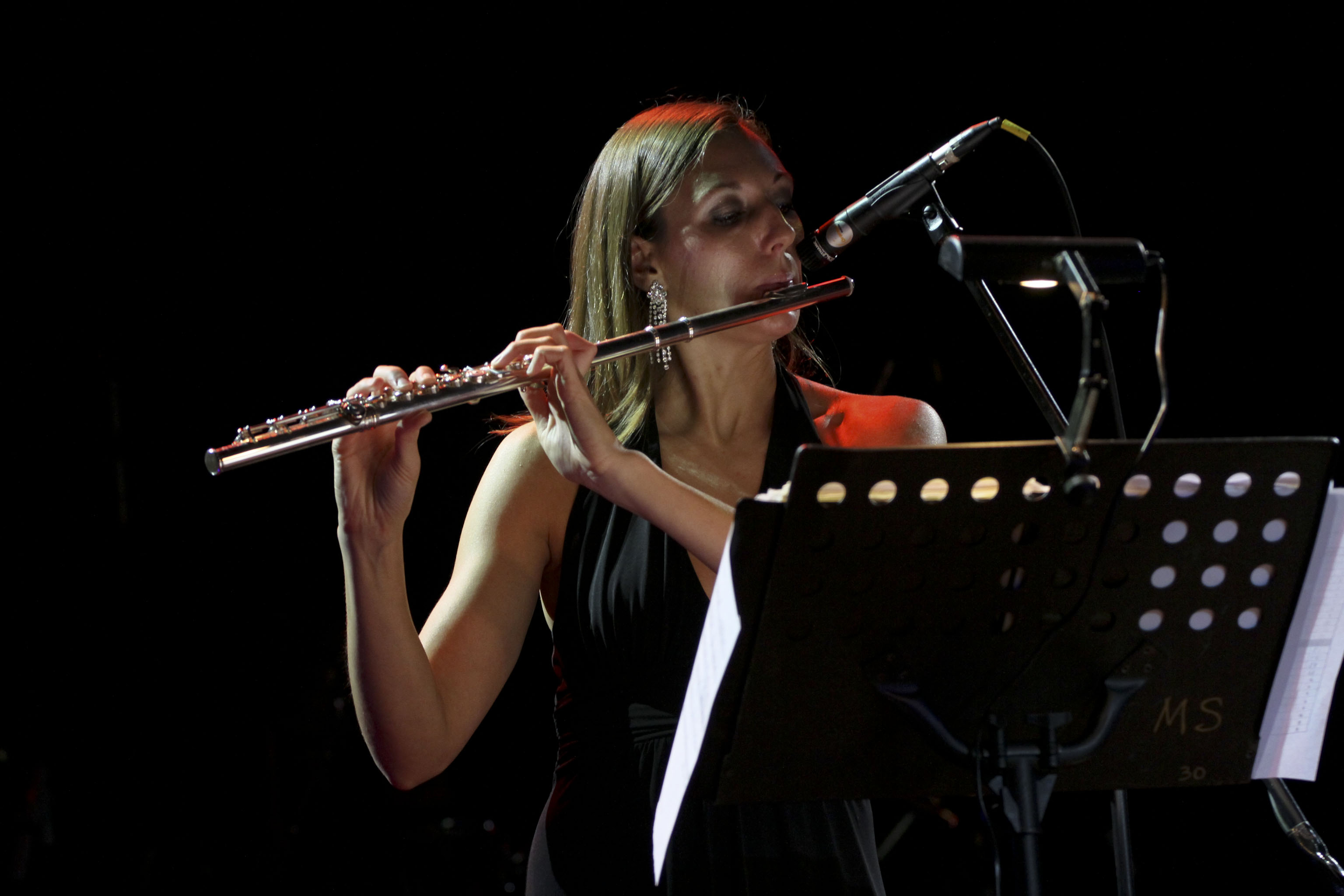 At only 34-years-old, Jennifer dos Santos ’05 has already toured the world as a musician, earned top rankings in national bodybuilding competitions, and run a nonprofit empowering people affected by limb loss

A brain tumor diagnosis in her mid-twenties caused professional musician Jennifer dos Santos ’05 to shift gears, but not in the way you might think. Instead of slowing, the internationally renowned flautist started training and competing as a bodybuilder. She’s now downshifting again into 3-D prosthetic limb printing. And that’s all in her off time; she spends her days as a full time staff member in the School of Social Sciences.

While her road may seem full of hairpin turns, each move has been meticulously thought through and taken on with true Anteater tenacity. And her UCI connections have been a constant throughout her fascinating trek.

Dos Santos grew up about two hours east of UCI in Hemet where she trained as a gymnast. Her determination was evident from an early age; the native Californian had her sights set on the Olympics. She also excelled in music and started playing the piano and flute in grade school.

When a growth spurt put the now five foot ten inch tall athlete out of the running in a sport with an under five foot average, the young dos Santos turned her attention to ballet. She also continued to develop her musical talents and – after a junior year trip to Europe with her French club – a love for travel. By the time she graduated high school – which she finished in the top three-percent of her class (she excelled at academics, too) – she chose to pursue music over dance, and UCI provided an excellent place to hone her craft.

During the next four years, she had incredible opportunities to work with accomplished composers and professors and grow as a musician. She performed in multiple ensembles and solo recitals. When her UCI flute teacher recommended dos Santos continue her music education, she did it full force with a master’s in performance at the University of the Redlands. It was there her abilities earned her a musician’s crowning achievement – a concerto, her own one-hour featured flute performance in front of the Redlands Symphony.

“Winning the concerto competition and being a featured soloist with the Redlands Symphony Orchestra was such a great honor and one of the highlights of my career,” she says. “Sharing my love and passion for music with the orchestra and audience through my performance was an unforgettable experience!”

When dos Santos graduated, both her UCI and Redlands teachers recommended her to fill in for a single flute opening with the singer Dariush. She auditioned and won the spot to play in the six-person Persian band that both her mentors had performed with. For the next five years, she toured the world, playing on stages in Europe, Dubai, Canada, the U.S., and Australia where she says one performance in Sydney really stuck out.

“Performances with Dariush were emotional,” she says. “His music struck a chord with audiences from four-year-olds to those in their nineties. His songs inspired millions of individuals to try to make the world a better place. It was incredible looking out at the Sydney Opera House and seeing 15,000 people crying because they were so touched by the music.”

Meanwhile, she maintained her ties to UCI. A part-time administrative gig in the UCI Department of African American Studies allowed the travelling musician to stay connected to campus in her downtime between concerts.

“It was a pretty hectic schedule keeping up with everything, but I found a way to balance it all,” she says.

It was during this busy cycle of travel, performance, work, repeat that dos Santos started getting headaches and noticing behavioral changes. A brain scan would reveal a non-malignant tumor on her pituitary gland. While a devastating discovery, the small size and nature of the tumor meant it could be treated with medication rather than surgery. And with that news, dos Santos didn’t skip a beat. She continued her crazy schedule, balancing a new full time UCI position in the Department of English with international travel and performance.

“I made a conscious decision not to stress from there and roll with whatever obstacle I encountered,” she says. “I was really fortunate to have a UCI manager who understood the importance of a work life balance, so I didn’t have to choose between performing and pursuing another career; I got to do both. That really showed me the kind of manager I wanted to be.”

After several years of juggling two careers while on medication for her brain tumor, dos Santos decided to take a step back from music. She focused on advancing her UCI career, but it wasn’t long before she threw herself fully into something new.

“The medication that had made me better also made it hard for me to walk across the street without feeling winded, so I decided to take on fitness,” she says. Just as she’d done with gymnastics, ballet, and music, she dove into weight training and fell in love. She completed a personal training certification online and soon began to train others in her off time from campus work. And she set a goal for herself: she would enter a bodybuilding competition.

“The thing I love about fitness is that you’re in total control. Mind over matter. You don’t just get physically strong, you get mentally strong. You learn that you can do anything you put your mind to.”

While training, dos Santos met her husband, a professional MMA fighter from Brazil. They married a year later and opened a gym. The experience of running the business-side of the operation - everything from marketing to budgeting - taught her skills she was able to apply in her UCI career as an administrator, and she was able to move up into a new role in the Department of Economics in the School of Social Sciences.

All the while, she continued to train, and ten years after setting her goal to compete as a bodybuilder, she entered her first show.

“It was a little intense leading up to the show – I spent the week prior eating nothing but tilapia for every meal when all I was craving was a brownie,” she says. “But my husband and I made a deal to compete together and we kept each other on track.”

She ended up finishing in third place, and has since earned a second place title. She has plans to continue with competitions, but with the first two under her belt, she said she’s letting herself relax a bit.

But not really. While scrolling through Facebook one day with her husband, she saw a video about a man in London who was using a 3-D printer to build prosthetics in a shed behind his house. Her interest was piqued. She did some online research and discovered Enabling the Future, a nonprofit that prints limbs using open source designs.

When you see a video of a child who’s never had a hand now able to pick up a water bottle, that’s pretty amazing.

“The project began online through the sharing of videos – one was of a carpenter who had lost his hand in South Africa who had contacted the group after seeing their design for a metal and steel hand; they designed one for him. Then a mom whose child was born without fingers saw videos on Youtube of the project, and they designed a hand for her son. These designs were then all placed online in open source so anyone could replicate them.”

The cause struck a chord with the couple. Dos Santos’ husband – now an EMT who plans to become a physician’s assistant – is from a poor neighborhood in Brazil that has seen a lot of violence. The idea of spending thousands of dollars there on a prosthetic wouldn’t be a reality. She’d been back several times and seen firsthand how much of a difference something like this could make.

“For roughly $20 you can print a hand, a finger, an arm, basically out of nothing,” she says.

And just like all of her ventures prior, she dove right in. She put out word that they were fundraising for a $600 printer to get started, and within a day, a former training client had it covered. She applied to gain nonprofit status and become an official chapter of Enabling the Future. The couple took a few test runs and got certified by the nonprofit to begin printing and has since created six hands that have gone to recipients in Brazil. They’ve also printed one for a local Orange County resident who picked it up at dos Santos’ home.

“It takes less than 24 hours to print a hand that can change someone’s life. It’s free for the recipient, and printing isn’t difficult. Getting word out there is the most important. Having people know that this resource is available is the next step,” she says.

As more people are becoming aware, volunteer engineers and medical professionals around the world are developing plans together for additional printed limbs. And with the low cost, kids have the opportunity to get new limbs printed as they grow.

“When you see a video of a child who’s never had a hand now able to pick up a water bottle, that’s pretty amazing,” she says.

The cause is amazing enough on its own. But when coupled with the knowledge that an Anteater was behind making that possible – an Anteater with her own remarkable story – it becomes something more.

In March, dos Santos was promoted to manager in the Department of Anthropology. She’s excited about using her experiences to help her staff and department grow.

“Working within the university and with students isn’t so different from performing as a musician, or competing and training in fitness, or helping people gain access to something as life-changing as a new hand. You’re able to reach people on a different level in education and I feel very fortunate to do that on UCI’s behalf,” she says.

And with everything she’s accomplished at just 34-years-old, we can’t wait to see what’s in store for this awesome Anteater. ●