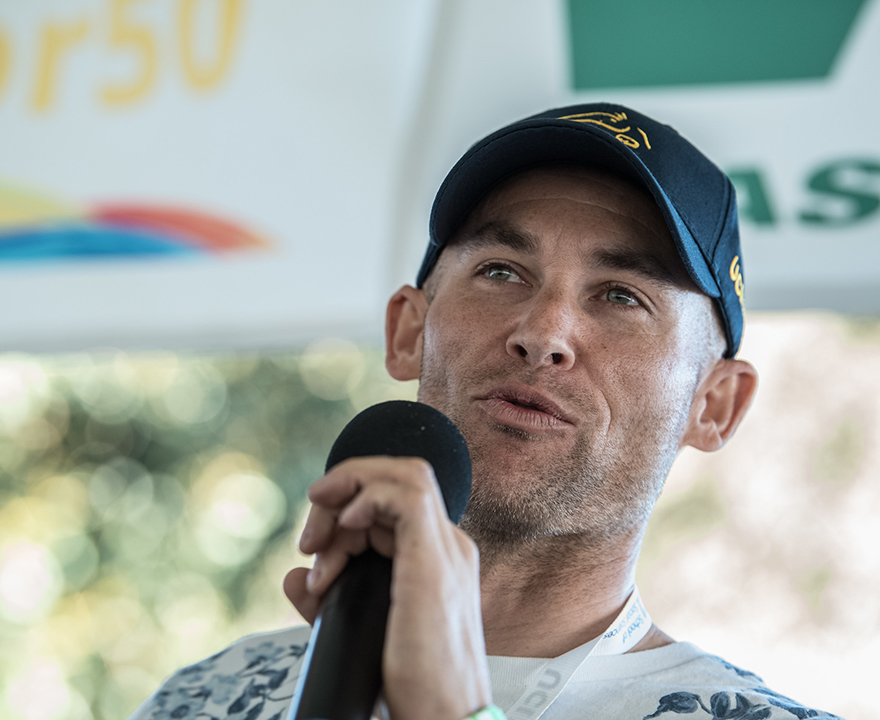 
UCI’s annual Homecoming celebration is just around the corner, and the campus is so excited to welcome everyone back in-person this year for the pre-game party in Aldrich Park! On Feb. 11, from 2:00-6:00 p.m., UCI social sciences alumni are invited to kickstart homecoming weekend at the school's Homecoming Tailgate BBQ before the 'Eaters take on the UC Riverside Highlanders at the Bren. The tent party in the park will feature craft beer, wine, and delicious BBQ along with opportunities to connect in person with fellow alums including superconnector Blake Baxter. The ’04 alumnus is a member of the Social Sciences Board of Councilors and the founding chair of the school’s Alumni Network whose members show up in record numbers each year to support their alma mater and show their social sciences school spirit. Join us for the party, and learn more below about Baxter’s UCI journey, entrepreneurial success, and continued Anteater involvement.

LA-based Anteater Blake Baxter '04 has a busy schedule. As cofounder and CEO of the independent animation and Web3 studio Immersive Enterprise Laboratories, and managing partner of DPAA Group, a blockchain, Web3, and metaverse advisory consultancy, he has his hands in a little bit of everything. But while some have called him a “supergeneralist,” he’s a “superconnector,” too, who brings together people, ideas, and businesses everywhere he goes – including at his beloved alma mater, UCI.

Baxter’s tendency to pursue multiple passions and pathways started young. Growing up in Calabasas, California, he played every sport he could – soccer, basketball, golf, tennis, track, and ballroom dance. He also played instruments, and was an especially good bass trombone player, so it was originally the arts that brought him to UCI, where he planned to major in music.

But he was hooked on sociology from his first class, where the professor sent students to conduct social experiments – like facing backward in a crowded elevator or standing still to observe people in a crowded gym.

“I thought, ‘This is fun, studying people and figuring out what makes them tick,’” Baxter says.  “And people are weird; I’m weird, you’re weird, let’s all embrace our weird.”

Baxter would learn a lot about people beyond his classes, too. The fraternity he joined, Kappa Sigma, was hugely influential in his life.

“The fraternity took groups of people from every single walk of life and put us together,” he says. “My roommate is one of my best friends to this day, but we were so different that people called us the odd couple. There were other odd couples, too, and that led to respect and helped build lifelong friendships.”

Connections he made through the fraternity led to a plethora of other opportunities on campus, as well.

“The fraternity enabled a wide range of experiences for all its members,” he says. “It created connections to other aspects of campus, and made it seem like every pathway was available – if you took the initiative.”

Baxter served as a counselor for the Student Parent Orientation Program, helping freshmen – and their often anxious parents – ease the transition to college life. He also volunteered with an after-school program in Santa Ana, where he and fellow students provided homework support and lessons to kids whose parents worked late and needed after school care.

“Seize every single opportunity,” Baxter advises current Anteaters. “There’s such a huge network of opportunities at UCI that it doesn't matter what you’re into, there’s something to dive into. The campus community out there is so important and impressive.”

While a student, Baxter’s job was the epitome of turn-of-the-century college cool: he worked at Abercrombie & Fitch. After graduation, he earned his real estate license and led the West Coast expansion of his fraternity for its national headquarters – while also maintaining a steady stream of side projects. Ultimately, networking in Los Angeles led him to become the right-hand man to an ultra-high-net-worth, globe-trotting investor. Baxter was soon applying socioeconomic theory from classes to the real world, advising and consulting for international companies to help expand their networks and partnerships.

On a trip to Korea, Baxter noticed exorbitant prices on wines that could easily be found in a grocery store back home. So, he and a fellow UCI alumnus and fraternity brother founded BW Global to export fine wines and spirits to Asia. The business allowed him to soak up knowledge of wines, as well as their marketing – choosing labels and bottle shapes that would appeal in specific markets.

After the export business was absorbed by bigger companies, Baxter became executive director of Blackrun Ventures, a private equity and venture capital firm based in Singapore that invests in a range of startups in financial technology, healthcare, renewable energy, and artificial intelligence industries.

When bitcoin launched in 2009, Baxter was a naysayer. But a few years later, as blockchain and financial technology, or fintech, became a hot topic in investor circles, Baxter took a closer look and started realizing its potential.

“The way I see blockchain and cryptocurrency is that it’s not one business, it’s a technology that can grow and push forward other industries,” Baxter says, pointing to the metaverse and non-fungible tokens as examples of industries enabled by blockchain technology. “Blockchain enables high frequency transactions to occur so that someone can, for example, enter a metaverse, and have a frictionless experience buying tickets to U2 in concert at the Rose Bowl.”

But the potential isn’t only for consumers. Businesses, too, will change the way they interact and exchange goods and services by leveraging blockchain technology. He shares an optimistic view on how blockchain, Web 3.0, and the metaverse will transform almost all industries.

Baxter continues to serve on several corporate and advisory boards because he enjoys strategy and building and growing businesses. Currently, he advises multiple companies on blockchain technology, including a real estate company using blockchain to handle escrow, title, and other parts of the purchase process; and an agriculture company that uses digital tokens to track its food sources and verify authenticity.

“All companies should, at a minimum, understand this space and how to position themselves appropriately,” he says.

In 2019, Baxter reconnected with childhood friend Daniel Urbach whose UCI roots also run deep; Urbach's parents met while they attended graduate school on the Irvine campus.  Together, Baxter and Urbach founded Immersive Enterprise Laboratories (IEL), an independent animation and Web3 entertainment studio that is changing how high-quality content is made.

"Our cost-effective, cutting-edge process sets us apart from traditional animation studios," says Baxter. "Our team is composed of industry veterans and experts who bring a wealth of experience and knowledge in storytelling, artistic skills, and cutting-edge technology proficiency, allowing us to deliver unique and custom solutions for our clients."

In addition, Baxter continues to advise companies in the blockchain, Web3, and Metaverse spaces as a managing partner at DPAA Group.

Baxter stayed in touch with the campus through the years, but he realized that wasn’t the case for all of his friends.

“Everyone has that story of the time they went back to campus, and realized how much had changed and grown,” he says. “I personally know a lot of alumni doing amazing things who want to reconnect with the school and enjoy the social aspects of the alumni network. There’s got to be a way to create those pathways for reconnecting to our shared experiences.”

In 2017, Baxter joined the Dean’s Board of Councilors and, in 2019, he was named founding chair of the UCI Social Sciences Alumni Network with the goal of helping alumni reconnect with the campus that holds so many of their favorite memories, and network with each other.

“The effort that Dean Bill Maurer, Tracy Acuri, Liz Codispoti, Ian Delzer, and Melissa Churlonis have put into supporting the Social Sciences Alumni Network, to the benefit of all 50,000+ alumni of the school, shows just how important this is to the school to engage with social sciences alumni and reconnect them to campus and their fellow Anteaters.” says Baxter.

Undeterred by COVID-19, Baxter and fellow organizers focused on a series of Be Bold virtual events, including a virtual homecoming featuring alumni who have gone on to succeed in fascinating jobs – from driving race cars to opening a bakery. The group also supported initiatives such as collecting donations for the FRESH Basic Needs Hub food drive and raising money for UCI Giving Day. Although alumni missed being together on campus, the virtual events had the silver lining of being easy for alumni to join from anywhere in the world. This year, with in-person events thriving again on campus, Baxter expects the momentum to grow even stronger. He’ll be among the familiar faces at the 2023 School of Social Sciences pre-game Homecoming Tailgate BBQ on Feb. 11, 2:00-6:00 p.m., celebrating with fellow alumni before the 'Eaters take on the UC Riverside Highlanders at the Bren. The annual party, now back in person, isn’t one to be missed, says Baxter.

“It’s been really fun and I’m really looking forward to where the Social Sciences Alumni Network goes as things start to open up – happy hours and coffee meetups,” Baxter says. “We’re going to continue that cohesion, magic, and energy that we all experienced at UCI.”