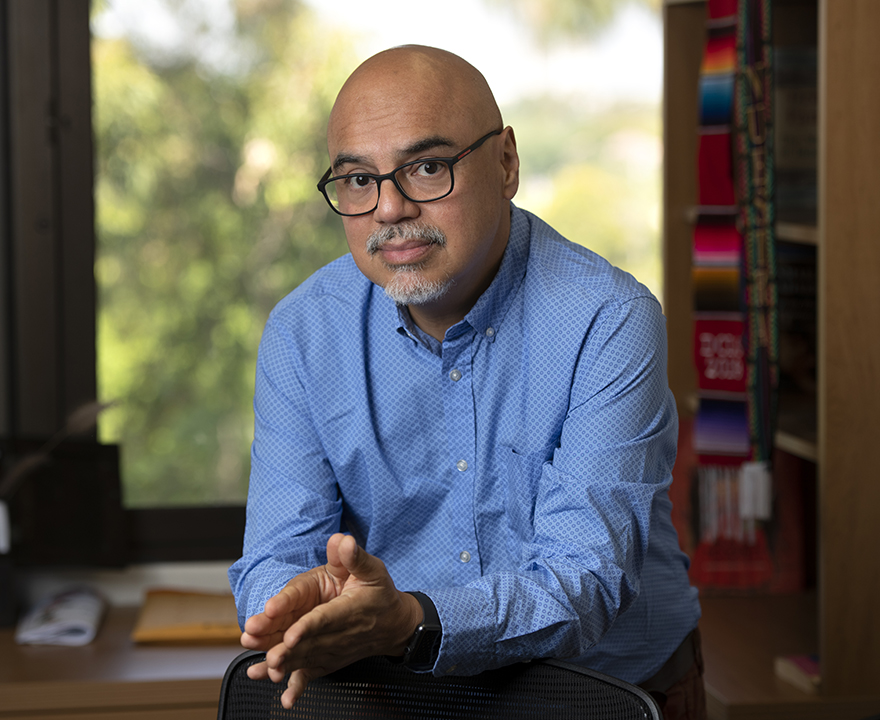 
"'Latino,' like ‘Latinx' and Hispanic, is a story about empire. It’s a term that describes a people who share a journey that begins with the conquests and the violence of empires. Latino people are brown, Black, white, and Indigenous, and they are European, Asian, and African. I am the son of Guatemalan immigrants, and I’ve interviewed and chatted with Latino people from Los Angeles to Maine. Some of us speak excellent Spanish, but many more of us do not. We are a diverse group of people joined together by shared roots in the upheavals and the crises set in motion by the building of the United States into a global superpower, and, further back in time, by the Spanish Crown’s attempt to build an empire in the Western Hemisphere. This in an obvious truth, one that looms over the daily life of this country, but that is entirely absent from the mass-media discourse about what the United States is.

Latino people are asked again and again 'What are you?' People want to 'place' us in the race scheme they carry around in their heads. Part of the answer lies in history. About one in five residents of the United States can trace their roots to Latin American institutions like the latifundio (which granted Spanish conquerors the rights to the labor of Indigenous people) and mestizaje (the new, Eurocentric social order created by 'racial' mixing that followed the conquest). But another, more important part of the answer lies in the present, in the social order of the United States. The wealth and comfort of the American people cannot be separated from Latino labor. If you could take a decades-long, time-lapse film of a typical U.S. suburb, you would see Latinx workers frenetically constructing, demolishing, rebuilding, and remodeling that suburb over and over again; with each day and year of work, they further deepen the presence of Latin American tragedy and ambition in the homes, workplaces, and neighborhoods of the United States.

Latino is also the most open-ended, loosely defined of the major race categories in the United States. A half-century ago, my parents were listed as 'Caucasian' on my California birth certificate. Today, it can feel like the transit lounge of American identities, one where people come and go with relative ease. Like the writer H. G. Carrillo, an African American man from Detroit who assumed a Cuban American identity; or like countless men and women who’ve married into Latino families and adopted their Spanish surnames in their professional lives; or like actors such as Oscar Isaac (Hernández Estrada), who is Guatemalan and Cuban and whose roles include an Armenian student, an Egyptian pharaoh, and a French painter. Latino people can think of themselves as white, and many of our unenlightened relatives believe lighter skin makes them superior human beings. In the most recent U.S. census, one-fifth of us chose 'white' as our race.

And yet a powerful media and political elite has convinced millions of United States residents that the problem of brown people of Latin American descent is the great, existential race threat of our times. We are, in their thinking, murderers, drug dealers, and welfare parasites. They have convinced many 'white' Americans that impregnable barriers must be built at the Mexican border to protect them from the barbarism of Latin America and its mestizo and Indigenous masses. The Mexican border has become such a powerful image in the United States imagination that the average person equates Latino identity with the border and with a B-movie understanding of Mexico as the home of a colorful, alien people with shaved heads who wear serapes. A Peruvian street vendor in New Jersey, a Colombian undergraduate, a Venezuelan janitor, and a Cuban American worker in an Alabama chicken plant are all 'Mexicans' to people ignorant of Latin American geography. And 'Mexican' itself is a series of stereotypes with echoes of racist attitudes about Native American people. White eyes believe they see the patina of a border or ocean crossing on Latino skin, and they have the sense of us as a conquered people who are allergic to the discipline and the good manners of Anglo-Saxon culture. We sun-darkened people fade into the background of their lives, the supporting players and extras of United States life. Or, like Native 'braves' wielding axes in an old Western, we are dangerous when we are on the warpath. You’ll see us portrayed as gang members, circling the figurative wagons of white families, in that new U.S. film genre, the cartel movie.

In my family, as in many others, 'Latino' is a story about resilience in the face of upheaval and exploitation. In the United States, Latino is a synonym for migration, in an age of migrations. And Latino is a synonym for mixed in a country called the United States of America that was built of mixing and migrations: 'illegal,' unauthorized, impromptu, desperate, and bold acts of reinvention and acts of love and family-building across 'race' lines, stretching back centuries. To be Latino or Latinx is to grapple with the promise, the beauty, and the conundrums of a migrant’s life, in a near or distant past, and in the complicated present."

Héctor Tobar is a professor of Chicano/Latino studies and literary journalism at the University of California, Irvine and award-winning author of six books published in fifteen languages, including the critically acclaimed, New York Times bestseller: Deep Down Dark: The Untold Stories of 33 Men Buried in a Chilean Mine and the Miracle That Set Them Free. His forthcoming book, Our Migrant Souls: A Meditation of the Meanings and Myths of Latino, is due out next May from Farrar, Straus and Giroux, MCD.