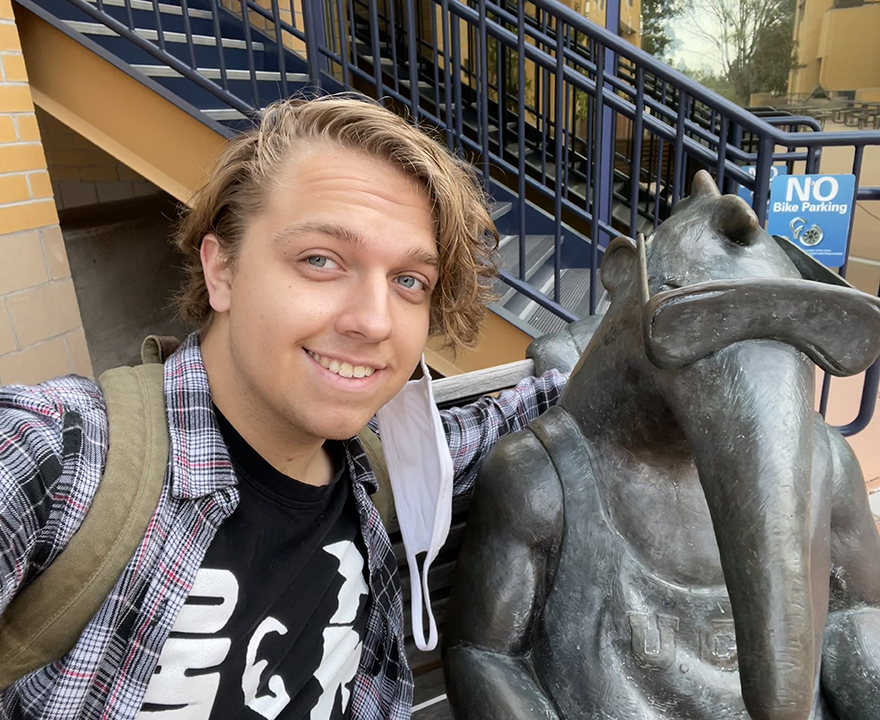 Cohen is from New Zealand and keeps afoot of the country’s affairs. He noticed that a proposed climate change bill was stirring up controversy when politicians questioned whether their country had an economic or moral obligation to take action.

Cohen felt strongly about this responsibility and was inspired to write a long and impassioned plea advocating for the adoption of the bill.

“The people who will suffer the most, will be people who live on these islands,” Cohen says.

On a purely economic standpoint, he argued how it would be cheaper to accept this bill than to accept more climate refugees, which New Zealand has already committed to do.

To his great surprise, several members of Parliament reached out, and Cohen’s letter turned into an invitation to address the group at their August 3 meeting.

Tune in to the livestream event: https://m.facebook.com/environmentSCNZ/.

Cohen grew up on the beaches of Wellington and has Polynesian ancestry. His family moved from the surrounding islands of Samoa and Tuvalu. He has relatives from these islands who have been displaced by rising tides.

“We’re island people. A colony of blue penguins lives behind my old house. There’re signs for penguin crossings on the streets. We may live at the capital, but when you’re surrounded by national parks and penguin colonies, it gives you a different perspective on what matters,” he says.

Cohen’s passion for the environment is personal.

“The ocean is part of our culture. It feeds us. It guides us,” Cohen continues. “As a child, I watched the consequences of unregulated carbon emissions. I saw the tides rise. I felt the summers getting hotter. It’s not just a matter of staving off a potential disaster, but saving thousands of years of a rich culture. It’s like a real-life Atlantis,” he says.

After Cohen graduated from high school in New Zealand, his parents decided to move to the U.S. so that Cohen and his siblings could pursue an American education.  Both of his parents retired early from the New Zealand military and now teach and pursue research at the university level.

Cohen laughs when asked if he experienced culture shock when he first moved to the U.S. At first, it was the size of vehicles that caught him off-guard. “Something that would be a monster truck in New Zealand, is someone’s everyday car,” he says.

He also realized that, like the cars, American culture was comparatively big and flashy. “In New Zealand people are shyer. They don’t want to talk about themselves because they don’t want to make anyone jealous,” he says.

Although Cohen graduated from community college with a nearly perfect GPA and with over 90 units of credit, he was still nervous about his chances of getting into a UC. “I thought if I don’t get in, it won’t kill me since it’ll just confirm what I already thought. But if I do get in, great!” he says.

He, of course, did get in and has been extremely grateful ever since.

“I believe UCI’s anthropology department has furthered the way people are thinking about climate justice. I’m proud, not just of UCI as institution and what it’s produced academically and scientifically, but how the students are very capable and strong people. Their moral fortitude is really inspiring,” he says.

Cohen admits that when he first arrived on campus, he had issues with shyness.

“The other students were so warm and welcoming. They encouraged me to be confident in the things I believe in. UCI really helps you grow into your best self,” he says.

A polyglot and multi-instrumentalist

When Cohen isn’t writing letters to Parliament, he’s organizing beach clean-ups, teaching Hebrew and Aramaic at local schools and synagogues, interviewing people who speak Indigenous languages in an effort to preserve them, and has helped create a DuoLingo course in Te Reo Māori, the language of the Indigenous people of New Zealand. He’s a polyglot who can speak eight languages: English, Esperanto, Hebrew, Arabic, Aramaic, Yiddish, Ladino, and Te Reo Māori.

Cohen is also “super into music” and poetry and spends a lot of his free time writing both.

“I love writing poetry and seeing how language and grammar are used. The staple of human ingenuity is in poetry,” he says.  He’s also a multi-instrumentalist and can play eight instruments: piano, guitar, ukulele, baglama saz, cura, drums, theremin, and didgeridoo. And he sings, too.

The nation that raised him

So much of Cohen’s aspirations stem from his will to help others. Although he’s very passionate about environmental justice, he also sees a pressing need for mental health providers in his community and plans on pursuing a career in psychology and will be applying to Ph.D. programs in the fall.

“Polynesian people don’t have good access to mental health services. A lot of depression and anxiety goes untreated. There’s this idea that we, as a people, just have to bear it. I know my education will be a privilege. I want to give back to the community and nation that raised me and has given me so much,” he says.

Helping others is also what inspired him to sit down and draft a letter to the New Zealand Parliament. And while he might not be as big and flashy as someone from his adopted country, he’s learned from his classmates to channel his once shy voice toward causes he believes in.

Jonpaul Cohen will address the New Zealand Parliament on August 3. To watch the livestream, visit: https://m.facebook.com/environmentSCNZ/