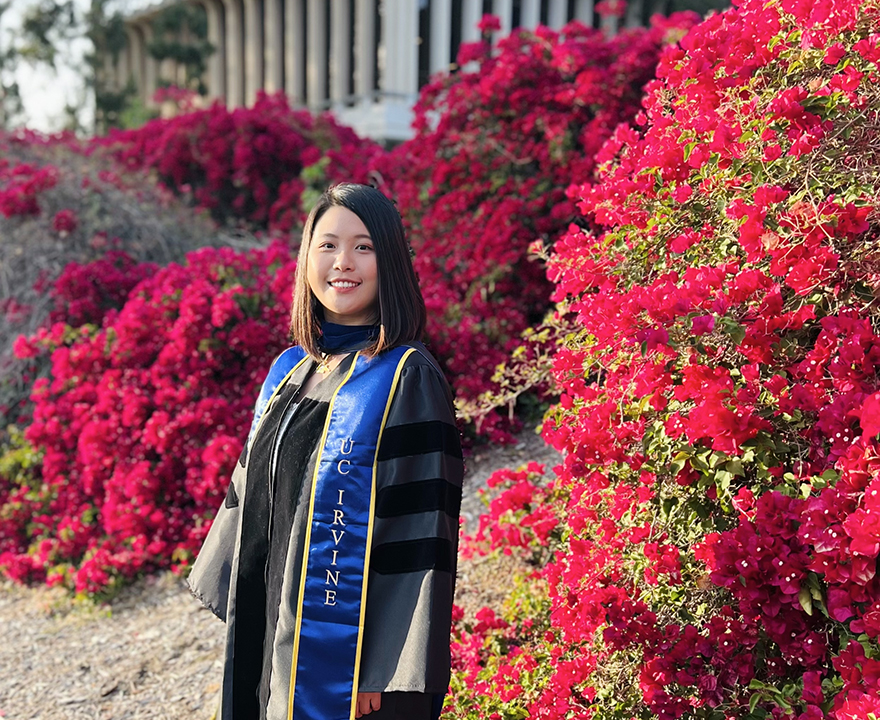 
An undergraduate psychology class at National Chengchi University in Taipei, Taiwan completely changed Pin-Chun Chen’s plan from becoming a teacher to pursuing graduate research in cognitive sciences with a specialty in sleep. On May 6, she successfully defended her dissertation. With a postdoctoral scientist position on the horizon in the neurosurgery department at the University of Pennsylvania and the experimental psychology department at Oxford University, the newly minted Ph.D. took some time to reflect on her academic journey.

“I grew up in a traditional Taiwanese family, raised in Kaohsiung, in Southern Taiwan, by parents who are elementary and middle school teachers,” Chen says. “Before I started grad school at UCI, no one in my family have been to the United States.

When she added psychology as a double major to her already planned education degree, her parents weren’t particularly pleased. But she pushed on and immersed herself in the science of sleep.

“As an undergrad, I joined a sleep lab for a project exploring how people become chronic insomniacs. Then, working at a hospital with older adults experiencing both dementia and insomnia, I became interested in the intersection of sleep and memory,” she says.

While applying to graduate schools in 2016, she crossed paths with Sara Mednick, UCI cognitive sciences professor and expert on the science of sleep, along with several graduate students from her Sleep and Cognition Lab at the American Sleep Research Society’s annual conference in Denver. The two clicked.

“I was looking for a female scientist who could be my role model, and I was fascinated by Sara’s research and impressed with her personality,” says Chen. She ultimately chose UCI over the University of Arizona with a sleep research group, primarily for the opportunity to work in Mednick’s lab. “UCI also offers a joint Ph.D. in cognitive sciences and master’s in statistics program, which is very appealing for its in-depth training in statistics that’s helped my research and given me options for potentially working in the industry.”

Over the past five years, Chen’s interest in the relationship between sleep and memory has continued to grow. Her work broadly focuses on the processes during sleep that are important for health and cognitive functions. She studies how autonomic and central nervous system factors interact to produce regulatory effects on sleep-dependent health and memory enhancement.

“By harnessing physiological biomarkers during sleep, my work aims to develop interventional tools like brain stimulation and pharmacology that target sleep and counteract age-related cognitive decline,” she says. “By understanding how sleep facilitates memory in healthy and aging brains, we can ultimately use sleep for early detection or intervention targeting neurodegenerative diseases, before it’s too late to make a change. With research findings that show detrimental effects of poor sleep on cognition and health, we can also promote public understanding and draw attention to maintaining better sleep hygiene.”

She’s had a number of articles published during her time at UCI in journals including Proceedings of the National Academy of Sciences, Psychophysiology, Neurobiology of Learning and Memory, Journal of Cognitive Neuroscience and others. Her work has been funded by Taiwan’s Ministry of Education and NVIDIA Corporation, as well as several UCI fellowships including the Social Sciences Grant Writing Fellowship, the Graduate Division’s Cascade Mentoring Fellowship, Division of Teaching Excellence and Innovation Graduate Fellowship, the Jean-Claude Falmagne Research Award, and the Renée Harwick Advanced Graduate Student Award.

“Over the years, I have served as a mentor for more than 10 undergraduates in the UCI Sleep and Cognition Lab, some of whom are now pursuing their own Ph.D. degrees around the country,” she says. “The best part of mentoring is that I get to see everyone fly on their own.”

As she gets ready to spread her own wings following her June hooding ceremony, Chen is grateful for her UCI experience, mentors and friends.

“The advice and mentoring I’ve received at UCI have enriched my research perspectives and helped me gain confidence in pursuing a career in academia. I’m so excited for the road ahead.”