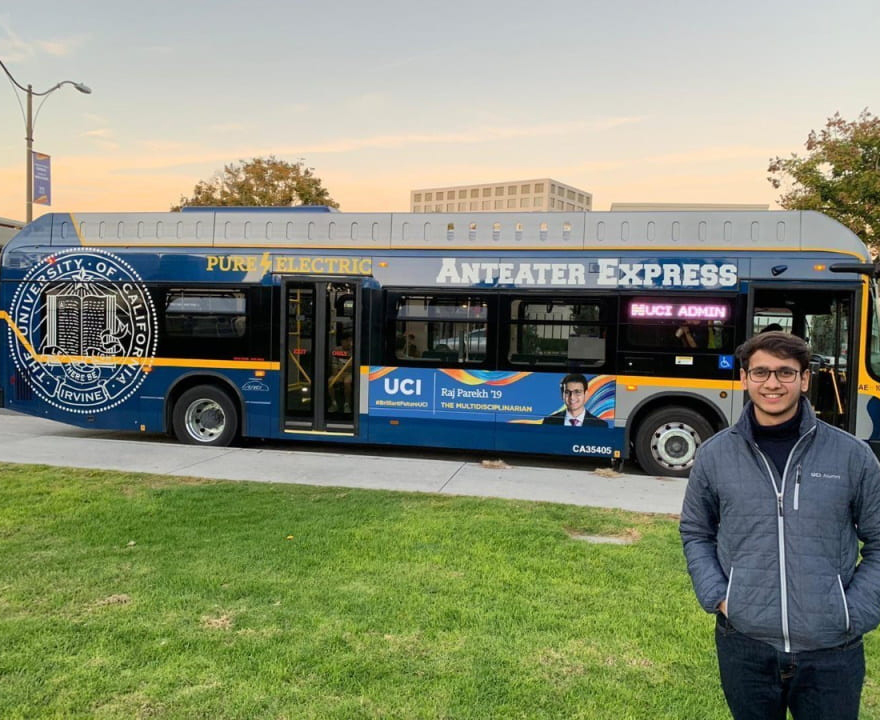 
What does it mean to leave a legacy? This is what Raj Parekh ’19 sought to discover when he came to UCI in 2015. Arriving from India and a cutthroat academic environment where few made it to college—let alone college in the United States— Parekh knew that he wanted to make his time at UCI something to remember. And, by all accounts, he accomplished what he set out to do.

In four years, Raj graduated with a triple major in quantitative economics, data science, and mathematics and a minor in innovation and entrepreneurship. He also served as a research assistant for the Deep Data Lab, held leadership positions in two clubs, and established two clubs of his own, including 180 Degrees Consulting, which remains active. As an alumnus, Raj continues to make his presence at UCI known. Not only is he active in the UCI Brilliant Future Campaign (you might recognize him from the pictures splashed across the Anteater Express busses), but he also manages the UCI Young Alumni Council as vice-chair and he’s a young professional member of the Dean’s Leadership Society within the School of Social Sciences. In May, he was named the UCI Lauds and Laurels Distinguished Young Alumnus, an honor that highlights his on-going UCI service.

To highlight his incredible story, UCI’s Division of Teaching Excellence and Innovation sat down with Parekh to talk about overcoming challenges, the importance of making connections, and how current students can make the most of their UCI experience.

You’ve accomplished so much at UCI, but I’m sure it wasn’t easy. What were some of the challenges you faced?

The number one thing was definitely getting my triple major approved. At UCI, I was trying to leave behind a legacy that could inspire a lot of people after me. So, right from the get-go, I was on a really different path. In trying to finish three majors in four years, there was definitely a lot of pushback because people hadn’t seen that before. I needed to prove myself and elevate their trust in me. This taught me a lot about real-life skills like how to present your story in a tactful yet convincing way and how to present hard evidence that backs up what you’re saying. So I kept my GPA up for the first three quarters and then went through this process where I made sure I had the right metrics for them to be confident in my ability to do something unique. That was my first major battle where I learned that there are so many different moving components, and it’s not always going to be straightforward. And this was sort of a trailer for life because not everything is going to be handed to you; you need to demonstrate your value and present a good case.

Another challenge I faced was dealing with rejections. I tried to dip my hands in a lot of different pots during my four years, and some of them worked out and some of them didn’t—obviously, rejections are something you have to learn to deal with. Coming from a background where in high school I was at the top of my grade and I was used to getting everything I wanted, I never really got hit with proper rejections. Just getting to that level of maturity where I could handle rejections with grace was something I had to learn. I also had to develop the ability to take feedback positively and the confidence to come back to something and give it another shot.

What was the biggest factor in helping you overcome these challenges?

I think the reason why I was successful through these challenges really boils down to people. Whether it was professors, my friends, or my peers, the people around me really helped me stay true to myself. They also pushed me out of my comfort zone and offered me different perspectives that helped me learn. At the end of the day, that’s the biggest value of college—seeing how people think differently from you and learning from that. I think that without the people around me and the support system I had, none of these challenges would have been easy to handle.

Speaking of people, did you have someone who acted as your mentor while at UCI?

I consider David Ochi as one of my closest mentors. He was running the ANTrepreneuer Center when I was a student, and he helped me in so many different ways. One example was when I was trying to launch the 180 Degrees Consulting Club during my second year. I think I sat down with him for almost four hours, and he helped me figure out what I needed to prioritize, what I needed to do, and what metrics I needed to hit in order for the club to be sustainable. For me, the club wasn’t just a one-quarter equation; it was meant to leave behind a kind of legacy for others.

David also helped me when I was participating in the New Venture Competition during my senior year. He challenged me to consider things I had never thought of before and helped us figure out where we needed to do more research.

On the personal side of things, he helped me grow as a professional. Coming from India and a different background, I didn’t really know how business in the U.S. was conducted. David taught me soft skills such as how to present yourself effectively, how you should communicate professionally, and the different ways you show respect to others. These seem like really small things, but they add up and compound over time, and these skills are something I now use on a daily basis.

You’ve mentioned the idea of legacy a couple of times. What would you consider your legacy at UCI?

I guess my legacy would be defined by doing something that was unheard of and then doing it for the right reasons—doing it to inspire people. For some background, I come from a hyper-competitive environment, and not a lot of people from my education system or my neighborhood go to college, let alone go to college abroad. So I was one of the first ones from my high school to go internationally for an undergraduate education. That was a big weight on my shoulders, and I felt like I had a big responsibility to go and do something good that could inspire folks not just at UCI but also back home.

I would say I left behind a pathway for someone who wants to take risks. Because at the end of the day, I feel like UCI has so many beautiful opportunities that are laid at your feet, and it's really up to you to decide which ones you pick up and which ones you don't. In college, I saw some of my friends pick the opportunities that they thought were the most acceptable or the standard path. They may have wanted to do something different, but they stopped themselves. For example, I had a lot of first-generation friends who would say that their legacy was making it through college, which is definitely an accomplishment, but they might be hesitant to take extra courageous steps or risks. So I hope people will come in and see my profile and say, “Well if this guy can do it, so can I.” I actually know a couple of examples of this happening right now, and that’s really exciting.

What would you tell a student who wants to take risks but is scared to?

First and foremost, surround yourself with people who can inspire you and really challenge your world views, beliefs, and shared values. Step two is then surround yourself with another group of people that will help you stay true to yourself. There were so many times where I wanted to quit; I questioned my decisions every day, sometimes even five times a day. Sometimes, during midterms and finals when I would be running all over campus, I would ask myself what I was doing with my life. But my friends were the ones who would say, “Hey, this is what you told me freshman year, this is why you’re doing this.” And that kept me motivated.

The other thing I would say is to believe in the power of the risk-free environment that UCI gives you. I think college is that one time in your life where you can just run with it. You can do so many things and explore so many different opportunities. In the real world, everything is blocked by a gatekeeper. But at UCI, all the gates are unlocked right from orientation, so believe in and trust UCI’s ability to provide a risk-free platform for students, and take advantage of it.

Transitioning to life post-UCI, what are you currently up to? Are you passionate about your work?

I fell in love with consulting as a career at UCI through establishing and participating in the 180 Degrees Consulting Club. Through UCI and the club, we served some of the largest nonprofits in Orange County. I saw the impact of my recommendations on the lives of real people in real-time. For instance, we took a shot at solving homelessness in OC through United Way’s UpSkill OC Initiative. We tried to solve the mentorship problem for Big Brothers Big Sisters Orange County. We’ve solved fundraising for CASA of Orange County so that they can take on legal cases for 30 more undocumented children. We’ve solved marketing problems for Alzheimer’s Orange County so they can get more donations to support Alzheimer’s patients.

At the beginning, you think that you’re just a student, and you don’t think that you’re going to impact the lives of others. But through consulting, you realize that there is a real impact attached to your work, and that’s why I fell in love with it. Two years after graduating, I’m with Deloitte Consulting and work with multinational corporations.

I guess what I’m really passionate about is leaving behind a tangible impact. It’s very rooted in quantitative metrics, but at the same time, you know for a fact that you’ve changed people’s lives.

Thank you so much for sitting down with us, Raj. To wrap this up, do you have any last words or bits of wisdom you’d like to share?

I’d like to say something about giving back. UCI is pretty big on pay-it-forward culture, and what I mean by that is holding the door open for those who are next in line and pulling them up. I would say double down on the pay-it-forward mentality during your time at UCI. There are a lot of ways of giving back. It doesn't necessarily have to be with money: you can donate your time, or knowledge, or skills. So do this and start early, because the benefit of being at UCI is that the rewards pay off exponentially over the years. I would say that’s the takeaway for anyone who wants to leave behind a meaningful legacy.

-This story originally ran in January and has been updated to reflect Parekh’s Lauds & Laurels award.
-UCI Division of Teaching Excellence and Innovation